It’s funny you would ask this, because I happened to have very recently gotten my hands on a leaked version of some of the original orc concept art Lord of the Rings films.  Rumor has it that this concept art was drawn by Peter Jackson’s 13 year old son.  Sadly, the studio apparently decided to go with a different artistic vision; I would have really liked to have seen this version in the final cut of the movie: 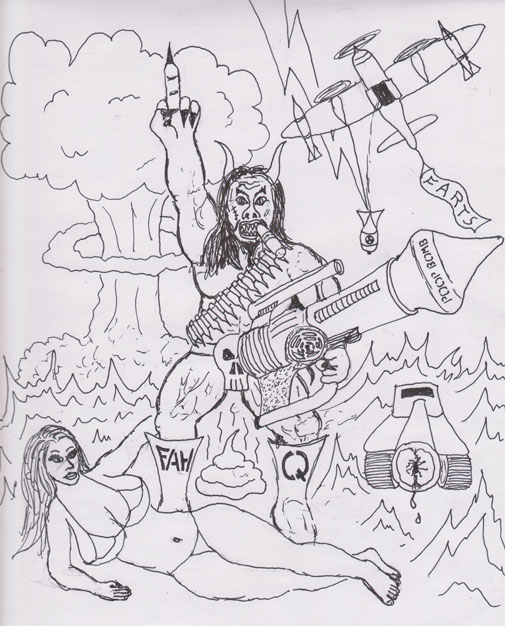 Czechoslovakia was one of the countries that Germany “peacefully” conquered in World War 2.  After annexing the Sudetenland in 1938,  Germany went on to divide the country into the protectorate of Bohemia and Moravia in the west while creating the “independent” puppet state of Slovakia in the East.  As for “fun facts” I was able to dig up some numbers on Slovakian vehicles and ordnance that are sure to be a lot of fun for the Tread-Heads and Howitzer-Hearts out there:

I don’t know about the rest of you, but I’d say those are some pretty FUN facts!  And yes Ian, this time your history lesson actually was brought to you entirely by the ASL rulebook!

“this is too silly to be black metal”

I know Black Metal is supposed to be all KULT and EVIL, but really, it’s pretty goddamn SILLY too.  So silly, in fact, that I really don’t think you can ever use the phrase “this is too silly to be black metal”.  To illustrate my point I have uploaded two clips of Black Metal songs.  Guess which one is the original song and guess which one I altered:

Can’t tell which one is the fake clip?  I rest my case.

I can think of all kinds of metal things to do, like, not wearing shirts ever, or being a disaffected white teenager, but to really answer this question I figured I would let the music itself sound off.  Thus, I’ve selected a few choice lyrics from a few choice metal bands that I think make a pretty good list of “metal things to do”:

Venom works hard, plays hard, but most importantly, they love hard.  They also smoke a lot of pot.  Doing drugs is pretty metal I guess, so they make the cut.

9.) I will lick you of the feets ’till the head making you feel torrential orgasms.

Sarcofago’s broken English can even make a song like The Black Vomit sound cute, thus this little ode to foot fetishes is positively adorable.  Though, in the grand scheme of things, not necessarily all that metal of a thing to do…

8.) Fists are in the air, banging everywhere, thrashing to the sound, faces melting down, it’s time to fight for metal tonight.

Lyrics to Metal Command, from Exodus’ 1985 album Bonded by Blood

I really can’t argue with this, there really aren’t many more metal things to do than to melt some faces like that Nazi dude at the end of Raiders of the Lost Ark–whether you are fighting for metal tonight at the same time as it is happening or not.

7.) When the day is over I like to ease my mind by jucin’ up my system with the beat of a heavy kind.

That phrase “ease your mind” that you use…I do not think it means what you think it means.  Though acting dumb is a metal thing to do I guess.

I guess this is a pretty metal thing to do?  It really just sounds kind of gross… Oh well, as is the case with any list that references Piledriver’s classic Metal Inquisition…extra points for that album cover at least–which most definitely depicts a metal thing to do (whatever it is that they are doing there).

5.) Raise the fist of the metal child.

As it happens, I have photographic evidence of my brother actually doing this, thus I can assure you it was a very metal thing to do.

I have no idea what the fuck Dio is singing about in this song, but I think we can all agree that riding a goddamn tiger is a pretty metal thing to do.

I could have easily made an entire list of “metal things to do” by pulling quotes from any single Manowar song from any of their albums.  But I decided to challenge myself and only use one lyric per band for this list.  Also, the one time I saw Manowar, they were so disappointed with the low turnout that they refused to put their leather on and played in jeans instead (but, thankfully, no cracker jack clothes).

1.) Bang your head against the stage like you never did before; make it ring, make it bleed, make it really sore.

Lyrics to Whiplash, from Metallica’s 1983 album Kill ’em All

I don’t know that this is the funniest or most ridiculous lyric on this list, but, based on the fact that almost every other band on this list has a song about banging their heads on the stage, it is apparently the most metal thing to do ever.

I’m not sure what everyone else uses, but this is what I always use, I call it “the turtle’s head”: 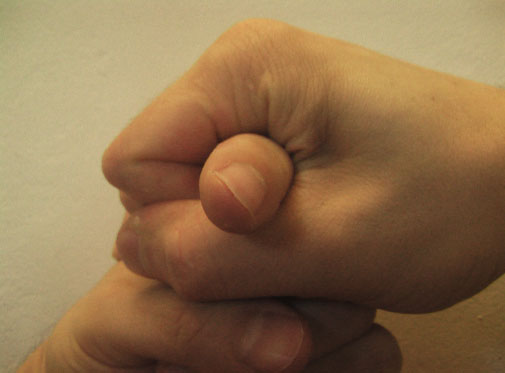 Make sure the finger goes from the inside out.  Outside in is a very different hand gesture.

Those Exodus lyrics reminded me of “Fist-Banging Mania” by S.O.D.:

As far as those DIO lyrics, he’s probably singing about his dick. I’m surprised that line wasn’t used in a KISS song.

Hah, I’ll buy that. Oh Ronny James “Holy Diver” Dio… And damn, I should have checked S.O.D., I bet they have a lot of “classic” lyrics.

I just want you to know that I should be editing an ethics column and instead I’m listening to clips of black metal. You win.

For those keeping track at home, I’ve had a few gchat responses to the mini black metal quiz. So far only 50% have provided the correct answer…which I think proves my point.

I am duly impressed!

Somewhere in Bergen, Hoest weeps. I share his profound sadness.

I think he brought that on himself with that one. Also, I don’t think that is a mouth harp…that is a boingy boing cartoon spring.

I think black metal as a whole suffers from the underuse of the boingy boing cartoon spring.