Ok, first I should probably rethink my choices for Minor Key Monday (which I realize is currently 30% Jesus music) if my website is actually getting hits for “Jesus music”.  But, baroque music and sad cowboys aside, I assume you are asking about real “Jesus music”, that is, less-than-holy genre music that has been underwhelmingly co-opted for The Lord.  This may shock a lot of my long time readers, but I have a dark secret about that specific kind of “real” Jesus music.  See, once, long ago…wow, this is hard…I bought a Christian black metal CD.

I suppose I better explain myself.  See, I was perusing the rock section for underground metal gems at a used cd store back in that quaint time when people still had to buy CDs to listen to music.  And I came across the following album: 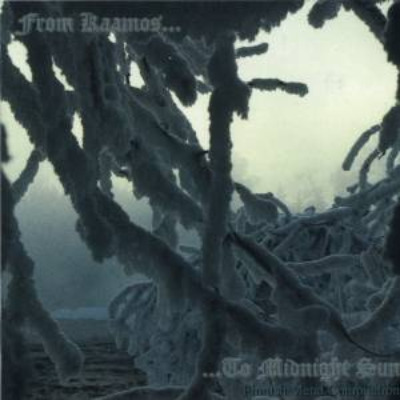 It’s a little hard to read, but it says “From Kaamos…to Midnight Sun: Finnish Metal Compilation”.  Now, I knew that Finland wasn’t really known for their black metal but they had a pretty sweet death metal scene.  Besides, the cover was all frost and Old English Font MT, so I might have stumbled across something pretty sweet!  I checked out the track listing to see what I was getting into.  I hadn’t heard of any of the bands before, but the band names sounded promising:

Anyway, I bought the album despite a small part of my lizard brain flashing a giant warning sign.  I got home and popped it into the CD player and was disappointed with an ironically soulless performance from Immortal Souls.  My disappointment only grew as the tracks all ended up being the lamest, most manufactured black metal I’d heard in a long time.  I stared at the cover in confusion trying to figure out how my instincts could have been so wrong.  Then it hit me…midnight sun…light where it is normally dark!  At that point I remembered where I had seen that “Deuter” word before.

Mclintock lipstick on collar why?

Mclintock is a John Wayne film (that is far more enjoyable than it probably should be) where John Wayne gets kicked out of his house for having lipstick on his collar by his wife, and after years of estrangement he finally gets pissed that she is thinking about kissing the governor and chases her around town in her underwear until he catches her and publicly spanks her with a coal shovel.  Then they go off and do it while he shouts “oh happy day”.  The lipstick on the collar is never explained in the film, but I hope you don’t think anything untoward happened to cause it to get there, I can think of a few other reasons it might have appeared there:

It could have been any of those really, I mean, it just doesn’t seem plausible that he cheated and then held his wife to a double standard about it with no attempt to apologize for his misdeed.

How to make 15 pancakes from scratch/How to make burritos for 15 people?

At first I found it odd that I got these two quite specific searches within days of eachother.  Was it for a pancake and burrito dinner party for someone and 14 of their closest friends?  But then I realized that the number 15 was just throwing me off, it was most likely not the same person.  After all, 15 pancakes is pancakes for 2 people, while you would need 75 burritos to feed 15 people.

As for an answer to the questions, just make a single pancake or burrito and then do that 15 and 75 times (respectively).

Also, if it really is a burrito dinner/slumber party followed by a pancake breakfast party…well…you might want to rethink that order…which brings me to my next letter:

I hate to break this to you, but the “smell” of any fart is merely the suspended poop particles that have been released in airborn form.  When a fart goes away it is just those once airborne poop particles slowly covering your room in a fine film of shit.  Of course it is an almost undetectable amount, so no worries.

Things don’t look so good for your chair however.  Depending on how long you have had it, years of farting at close range in almost exactly the same spot has most likely brought the concentration of poop particles to unacceptable levels.  Thus, you have essentially shat your chair: it doesn’t smell like fart, it smells like poop.

I’m not sure how you got this insider information, but yes, at one point Ozzy Osborne was signed to do the voice work for King Triton in The Little Mermaid.  However, upon seeing his purposed concept artwork, Disney rethought their decision: 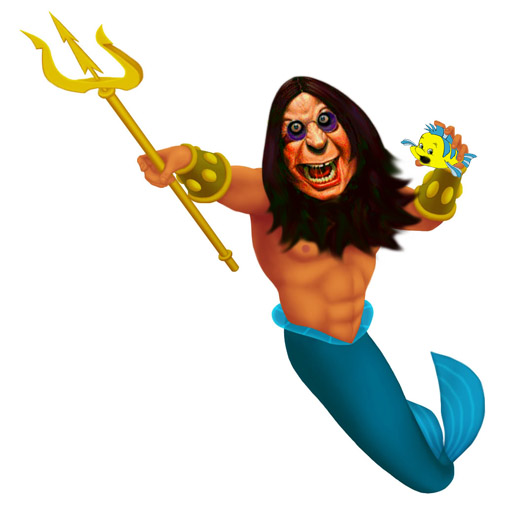 We’ve seen what he can do to a dove…I’d be worried too if I was Flounder.

“Virile” is a hard word to spell…

Actually, the joke is on you because I meant “viral” based on his legion of conquests…which I guess I still would have spelled wrong. Of course no one will ever know due to the magic of editing!

Seriously – who the hell eats only five burritos? Probably the same pussies who listen to Christian black metal.

I was listening to Lordi this morning. How is that classified, exactly? Also, I’m about to eat one burrito! Just one! HAHAHAHA!

I’ll have to double check, but I’m pretty sure Lordi are classified as a band that wishes they were GWAR.

Regarding your one burrito, I quote the luminary “Weird Al” Yankovic when I say “there’s not a taco big enough for a man like me – that’s why I order two or three.”

Ian claims to like “savory pancakes,” so he puts stuff like cheese and pepper and sour cream on them and rolls them up into tubes and stuff, which, right?, is weird. But also is a pancake burrito and therefore HAS BROKEN THE SPACE-TIME CONTINUUM because how many of those are you supposed to eat if you are 15 people RIDDLE ME THAT, ISLEY??????????????