I’m glad you asked this before you went on your D.C. Trip.  When I visited the capital I was totally unprepared for the classic Washington monument boner picture, so I have taken the liberty to use my picture as an example of what NOT to do when you take your own version of this hilarious picture.  First, here is the picture I took, with highlighted (and numbered) problem areas: 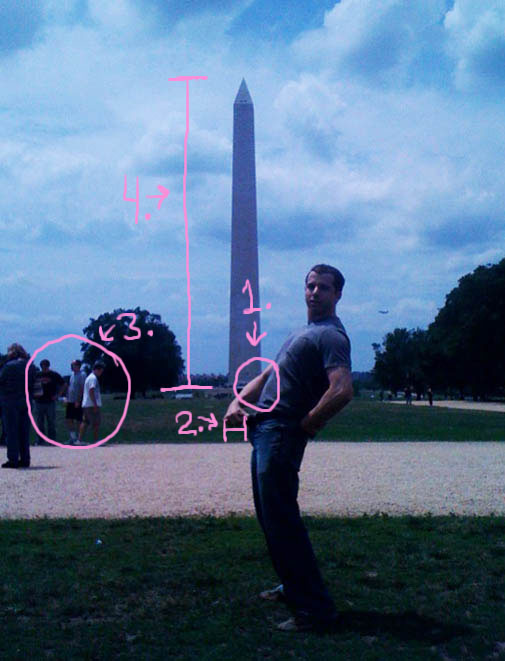 So, let’s take a look at what I did wrong:

wwii has always fascinated me.

You know, I was all ready to make fun of you for being such a horrible fucking tool that you actually say stuff like this on the internet.  Then I googled it myself.  And realized that you were just quoting something that I have already said on the internet.

Snatch that’s what she said?

Which, for those keeping track at home, is what she said.

You know, I get a lot of horrible searches that lead to my blog (most of them from Jock Blog).  For instance, just a quick glance through the Mailbag Monday archives brings up the following examples:

Yeah, some sick, twisted shit (no pun intended) in there.  So perhaps I need to get my priorities straight and figure out what is going on with me that I’m more worried about the fact that googling “Princess Blog” brings people to my site than I am about how many searches I get for jocks, boners and shitting.

I’m glad you asked this, because I’m pretty particular with how I lay down my lands while playing Magic the Gathering.  See, when I first started playing magic, I realized that the rule that you can only play one land per turn was really going to cramp my style.  BUT, not to worry, thanks to my discovery of a little card called fastbond, I was finally able to lay down my lands the same way I lay down everything else in life.  Rather than explain my unique technique in writing, I went ahead and made a video which illustrates it a bit better than I would be able to describe with words:

Oh goodness. That was more excellent than I had expected.

God damn it, I’m supposed to be looking at crosswords, not choking on my pumpkin spice latte! Now I have to watch this eight more times.

That, it what she said.

I always pour out a memory jar for my dead homies.

Does you watching this video 8 times in a row count as it “going viral”?

Holy shit. That made my November and it’s only the 1st of tha month. (I’m sure the rap throwback reference is appropriate here.

I can’t promise I’ll keep up the momentum for Internet Meme Monday…but I’ll try…cause it’s just Metal Masterpieces and Hobbits and shit after that.

I think it does. Think of all the time you’ve saved now that you can just repost this next week for Internet Meme Monday.

I love it so much. So so much.

I….I…I don’t even know what to say. I mean…so much…I yeah. You got me pretty speechless. I can assume each tear drop are for each of your magic homies lost in the battle huh?

That good huh? So we gonna hit the clubs sometime?

Every time I watch this I laugh out loud. Well played, sir.