What can I make with just milk sugar flour syrup bread and peanut butter?

I’m glad you asked, I had just this combination of items myself recently and was able to make something pretty cool with them.  See, people are always asking me how to make a potassium nitrate smoke bomb, and with the ingredients you have listed you can learn not just how to make a smoke bomb, but, even better, how to make a “dirty bomb” (though I should clarify here so I don’t get put back on that terrorist watch list…I’m talking about “dirty” in a “Jock Blog” sense).  I know you might be thinking “but I don’t have any Potassium Nitrate (Saltpeter)…isn’t that the most important part of a smoke bomb?”  Well think again–did you know that you own bodily waste is capable of producing this amazing little compound?

Here’s what you’ll need to do:

Find a large (300 gallon or so) airtight cement tank and fill it completely full of your own urine, feces and enough water to mix everything together.  After making sure it is covered tightly, let it sit for about 10 months.  Using a good filter, drain off all the liquid, and then filter the drained liquid through ashes into wooden plastic lined trays and allow it to evaporate.  When evaporation is complete you will find potassium nitrate crystals have formed on the bottom of the trays!

Ok, so now we can add Potassium Nitrate to our ingredient list.

So, back to the original ingredients.  While your shitwater is fermenting those ten months, take about 50 jugs of milk, add a cup of flour to each jug, recap them and then let them sit out in the sun for the ten months as well until they turn into a nice thick sludge (without the flour you will just have curds and watery milk juice…trust me).

Then, mix your potassium nitrate with the sugar and syrup in the following ratio:

Mix them all together and then cook slowly for about an hour until you have a play dough like substance.  Mold it into a ball and stick a waterproof fuse into to make a military grade smoke bomb.

The Potassium Nitrate and sugar smoke bomb will provide its own fuel and oxidant, so the pressure built up from the released smoke in the airtight container will eventually cause the barrel to explode.  If you time your knock on the front door right…well…let’s just say your foe will learn the true meaning of “Dirty Bomb” (especially if you mix some of the shitwater solids into your barrel too).

Then, go home and make yourself a peanut butter sandwich.  You earned it!

I’d say this sounds like a really good idea.  In my experiments with the phrase it has proven to be one of those rare comic gems that really just never gets old!  I look forward to hearing stories of how your exploits with “twss” have delighted and amused your friends for hours on end!

Wolverine’s Healing factor prevent him from becoming a zombie?

I must confess that I have only seen a handful of zombie movies, and Marvel Zombies to the contrary, I can’t say for sure whether or not Wolverine’s healing factor will prevent him from becoming a zombie.  So I figured I’d go ahead and ask the experts in all matters zombie related over at www.ablogisatreat.com for a little advice on this question.  Here’s what they had to say:

The primary issue in the discussion of zombie infection in the presence of a healing factor (whether Wolverine level or not) is that a prerequisite for zombification is death.  Zombies are, by definition, the reanimated dead.  This means that Wolverine’s regenerative powers are not mutually exclusive with zombification since the healing factor is only operational while he is alive (for if not, it would work over time to return him to life, and Wolverine is not immortal, just in possession of a hell of an immune system [in my understanding, anyway]), and zombificaction really only kicks in post-death.  So, for instance, in a classic Romero scenario where zombification is due to mysterious “space radiation,” if Wolverine were recently deceased via natural superhero causes, he would be perfectly eligible for reanimation, and he could use his berzerker claw advantage to be the first out from underneath the six feet of dirt and lusting after the cerebral content of the farmhouse survivors.  In the zombie infection scenarios involving some sort of zombie pathogen, there are two main variants, each of which plays out differently vis a vis Wolverine’s powers.  In the first scenario (Max Brooks, the “Dawn of the Dead” remake, etc) some sort of zombie pathogen hangs about in the body and then takes over when the infected host finally dies.  Usually the infection itself leads to the death of the subject, but frequently the zombie pathogen kicks in anyway after the victim dies via some other mishap.  Wolverine’s healing factor would presumably work against the pathogen-induced death, but unless it were able to completely eradicate all instances of the pathogen in the body, he would still zombie up on death.  The latter scenario seems more likely since, for instance, Wolverine must coexist with foreign substances in his body at all times in order to perform natural human (x-human?) functions such as digestion.  Then again, maybe Wolverine has to replenish his reserves of intestinal bacteria daily with massive cups of X-men-brand-yogurt.  In the second scenario (e.g. “28 Days Later”) the pathogen (in this case the rage virus) takes over the body while the victim is still living, and so by definition those infected with the virus are not actually zombies.  Wolverine is clearly immune to this scenario.

So there you have it, the experts have spoken.  If you can manage to kill Wolverine (without vaporizing his body)…he could become a zombie.  Otherwise…no dice!

If you aren’t talking about either, I think the word you are looking for is “eggshell”.  Or white.

How to make extreme editz?

Boy I get this question a lot.  The problem is, I don’t exactly know what medium everyone is wanting to make these extreme editz too.  But even without that information I thought I’d give answering this common query a shot.

So, in the case of literature, let’s say you are reading along and read something kind of cool, but you just wish it was a a little more extreme.  This is actually a pretty easy situation to extremify, but the method of adding extremity is really pretty situational.  So let’s just look at a quick example by pulling a random book off of my shelf and opening to a random page and seeing if we can make some extreme editz to a random sentence.

So, our original sentence will be:

“In a hole in the ground there lived a hobbit.”

“In a hole in the ground there lived a motherfucking hobbit!”

But I realize that perhaps you were referring to the visual arts instead so I included one more example of how to make extreme editz here.  See a lot of the time you will have a pretty sweet picture, but, if you are like me, you will say to yourself “this is pretty badass and/or sweet, but couldn’t it be more EXTREME??”  Well once again, it only takes a few editz to achieve this goal!

So let’s take a look at a sample picture: 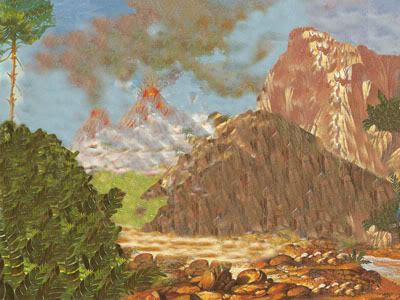 I mean, that is kind of sweet with the volcanos I guess, but we can do better than that, so let’s add some fucking dinosaurs shooting fucking lasers: 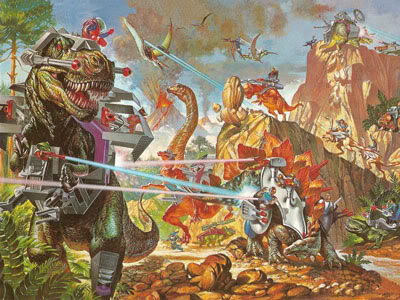 Now I know what you’re thinking…have we finally achieved our goal of extreme editz? Not just yet–we’ll need to add a few more things before we have achieved true EXTREME editz: 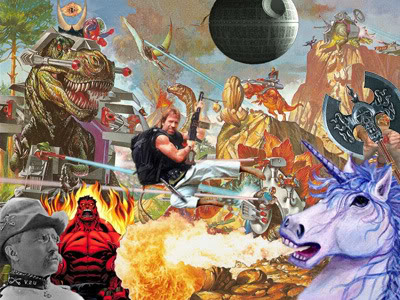 Now I don’t think anyone can argue with the fact that we have finally achieved EXTREME editz…hope that helped!

That’s it for Mailbag Monday this month!  Tune in the first Monday of next month for: Mailbag Monday: That’s What She Said Edition!

But a query: what happens if Zombie Wolverine gets bitten by a wolf during a full moon? And that wolf is made of adamantium??

I also have a Wolverine-related query!

Is Wolverine capable of forgetting? Do his mutant regenerative powers extend to the neural networks in his brain, which would prevent him from ever being able to forget? If so, given how long he has been alive and will presumably continue living, does he run the risk of reaching the physical limit for information storage in his noggin?

In answer to your questions:

I would assume he is immune to lycanthropy since it would also function like a virus. One thing that annoys me about the comics is that they act like adamantium bullets and blades can fuck wolverine up…but I’m pretty sure if I had a steel sword that would not mean I could easily cut through other steel things.

Ian, that’s an interesting question. My thoughts are that his regenerative powers would just work so far as to keep his brain in perfect physical shape, but the neural connections that are his memories and stuff are not covered in his healing factor plan. This is somewhat canon since Wolverine being brainwashed is a big part of his character…they fucked with his brain and he couldn’t regrow the connections to re-remember things since his brain just regrows to its base state.

But that has always been a point of confusion for me…because he gets his brain fucked with a lot dudes shoot him in the nose and the bullet rattles around in his brain, etc. Why doesn’t he end up needing months to learn how to walk again and stuff?

Anyway, it was the subject of much eye rolling in the wolverine movie when the bad guy shot him in the head with an ADAMANTIUM BULLET (eye roll!) and it made him forget his past, he still remembered how to talk walk and everything else. Laaaame.

Heh…side story: While trying think of BADASS things to put in this picture I imed (my friend) Chris and was like “What’s the most BADASS thing you can think of aside from Red Hulk?”