How to hear a diminished fifth? 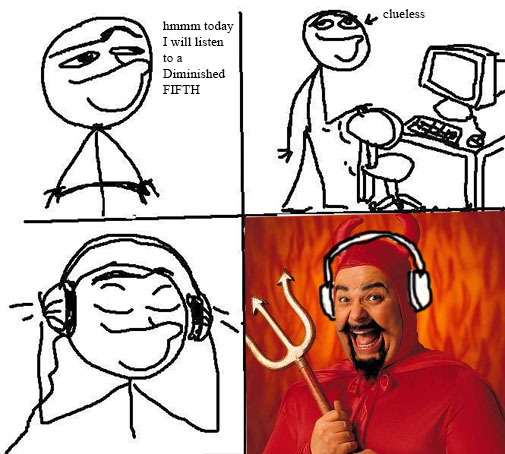 Speaking of the devil…

Now, of course, there are far more than just six names for Lucifer.  I mean, hell, one of his many names is “the one with many names after all!  Thus, I was initially stumped as to how was I going to narrow it down to just six for you.  Then it struck me, no one knows Satan like underground metal bands, so here, culled from the www.metal-archives.com database in order of popularity, are the 6 most popular names for the Devil/Satan as seen in underground metal band names:

You know, now that I think of it, black metal bands really do love to use S-words in their lyrics!  Off the top of my head, here is a quick rundown of the most common:

What’s that? I just ripped off the SNL Celebrity Jeopardy skit joke for this question? Oh fine, here’s a quick black metal sword for you from the kvlt Brazilian black metal band Evil (at least I think this is a sword): 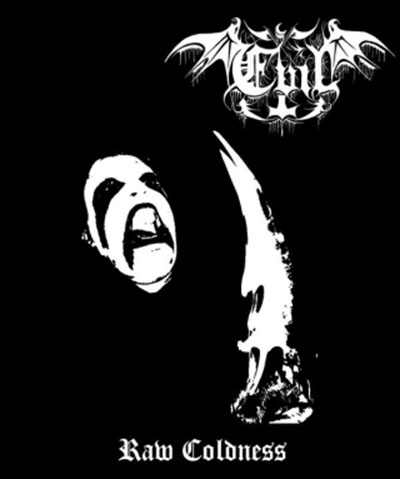 To think I almost missed a chance to post a ridiculous black metal album cover!

Istari! Radagast was an Istari, not a hobbit!  I would have also accepted “wizard” or, hell, even “old hippy hermit dude,” but hobbit??? Come on! I could understand not knowing Alatar or Pallando (MAYBE), but considering Radagast was even sort of in the books, you’ve really got no excuse!

Wizards of the coast decanter of endless water?

Ah the Decanter of Endless Water, my all time favorite Dungeons & Dragons magic item!  Why would I pick this over a Wand of Magic Missiles any day?  Let’s start with the description from the Dungeon Master’s Guide:

Decanter of Endless Water: If the stopper is removed from this ordinary-looking flask and a command word spoken, an amount of fresh or salt water pours out. Separate command words determine the type as well as the volume and velocity. * “Stream” pours out 1 gallon per round. * “Fountain” produces a 5-foot-long stream at 5 gallons per round. * “Geyser” produces a 20-foot-long, 1-foot-wide stream at 30 gallons per round. The geyser effect causes considerable back pressure, requiring the holder to make a DC 12 Strength check to avoid being knocked down. The force of the geyser deals 1d4 points of damage but can only affect one target per round. The command word must be spoken to stop it.

What’s so great about that?  Well, depending on how much of a pushover your Dungeon Master is (and assuming there are no experts on hydraulics at the table) you can pretty much do anything with a decanter.

I mean, granted, after some quick calculations it turned out our old tactic of flooding entire dungeons and then collecting the treasure via water-breathing spells doesn’t actually work in any kind of reasonable time scale, even at geyser speed.

However, with the addition of a Create Stone spell to form a nozzle around the decanter you can do all kinds of stupidly awesome things.  By altering the size and shape of the nozzle to focus the geyser stream of water you can make everything from a jetpack to a “water laser.”  Of course, if I actually understood how choke points and cavitation worked, that probably wouldn’t work either.  Which is too bad, because you could even “upper decker” the decanter by taking a shit in the surrounding nozzle to make a “decanter of endless shitwater” of sorts.

Typo. Allatar should be Alatar.

Fixed…so you are saying the Radagast search wasn’t you?