What is middle earth Monday?

Oh man, so, Middle Earth Monday is honestly just about the BEST thing ever!  I mean, you have to be like really into Tolkien and stuff first, obv, but if you are, man are you in for a treat!  See, every 4th Monday of every month for the past 31 (!!) months, www.isleyunruh.com has posted an in-depth discussion of a different place in Tolkien’s Middle Earth in a post called “Middle Earth Monday.”

It is so great!  Like, Isley rarely restricts himself to just discussing places discussed in The Lord of the Rings and The Hobbit, instead he prefers to go “off-trail” and look at the countless places that were only detailed in Tolkien’s copious notes and ancillary writings.  Isley’s covered everything from the salinity content of the Sea of Nurnen to the much debated location of Rhosgobel, the home of Radagast the Brown.  Even better, he really works hard to adopt that super serious and epic old-fashioned writing style we all love Tolkien for!  Sitting down with a Middle Earth Monday post is like being instantly transported to an ancient land of mystery and lure!  I especially love how Isley adopts a tone that continues to support his theory that Middle Earth was in actuality a pre-Pangea supercontinent, thus tying his well researched fictional cartography into REAL LIFE!

In all, I can not recommend Middle Earth Monday highly enough.  But don’t take my word for it, just listen to what www.isleyunruh.com reader “Shena” had to say on the most recent post:

ANOTHER THRILLING INSTALLMENT OF WHAT IS SURE TO BE EVERYONE’S FUTURE FAVORITE! NEVER EVER STOP WRITING THESE!

Oh man, so, What is Best in Life is honestly just about the WORST thing ever!  It is the name for a weekly blog written by the eponymous egomaniac of www.isleyunruh.com, but the title is about as deceptive as the idea that Isley actually posts his “Monday” posts any time before 1:00 AM Tuesday morning.  In theory, it is a blog full of diverse topics, a little something for everyone. In reality, unless you are someone who likes poorly proofread articles on Middle Earth minutia, “essays” about movies people only pretend to like, or, the subject of the other 90% of his blog, BLACK METAL, steer far away from Isley’s little armpit of the web.

Even his much vaunted “Mailbag Monday” is just a self serving vanity project where he mistakes smarm for charm.  It can’t even sustain its own swollen head since all it does is generate the same search terms every week.  And that’s right, in case you didn’t get enough of them, those search terms are all Middle Earth or black metal related.

Oh, also, if you are, like 80% of the population of the United States, religious?  Forget about it.  He’s really mean to them and employs such juvenile tactics as purposely not capitalizing “Christian” or “Jesus.”

And, yes, in case you were wondering, this was a Jock Blog search.

Let’s see here, of the metal I like, thrash metal really loves to focus on that low E string while death metal prefers to play even lower.  Thus, I guess we’re left with black metal if you want a REALLY high pitched song.  And while most all black metal has a nice high pitched static hiss to the recording, there is one album in particular that really sticks out as far as high pitched black metal goes.  I’m speaking, of course, of Temnozor’s first album “Ведовством Крепка Чёрная Слава Руси” (Sorcery is Strengthening the Black Glory of Rus).  And here, for your listening pleasure, is the best song, “Бъ Одън Народ Словънск” (Be Like Oden Slavic People):

I wonder how many budding black metal aficionados have blown out their tweeters listening to that album?  Temnozor must have watched a poorly translated Russian version of Spinal Tap where they misinterpreted the “these go to 11” scene as referring to their treble levels only.  Though, it makes for a nice complement for the vocals and poorly played flute parts I guess?

Of course, if you were referring to high pitched vocals, I should probably throw Brian a bone and admit that this song is probably the best as far as that kind of thing goes:

This is an interesting idea, taking pictures from my past and photoshopping them into various biblical backdrops, I like it!  Though, as I started to go through pictures from my past I realized that in every one of them I was making some sort of Satanic hand symbol.  Luckily, the bible and evil shit goes together like Russian black metal and flutes, so I was able to come up with a few biblical themed pictures anyway.

Just mouseover each of the following pictures to see a brand new biblical themed version!

First off we have a picture of me in 1998 at Milwaukee Metalfest.  My dad was nice enough to drive me up there on a family vacation in Illinois.  He was also nice enough to actually attend the concert with me while decked out in my best dragon shirt.  Just look how much fun he had!  He did agree that Suffocation and King Diamond (Brian gets two bones this week!) were the highlights at least. 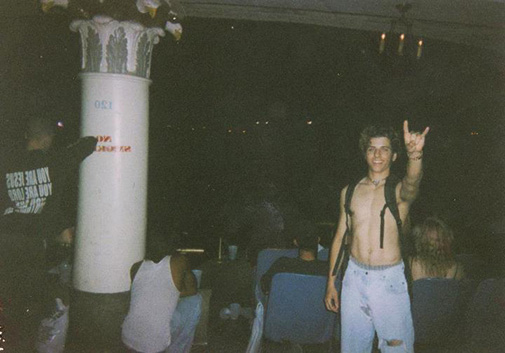 Next up we have an underexposed picture of yet another Metalfest trip!  This time it was Katie and I’s ill-conceived plan to take her Achieva to Milwaukee Metalfest in 2001. We had just enough money for one chinese buffet a day, got kicked out of a hotel parking lot for sleeping in her trunk, committed every vehicular moving violation known to man, and saw a shooting.  And yet, somehow, the trip was a rousing success anyway. 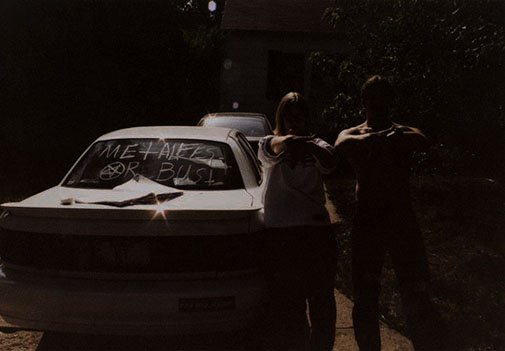 The most metal of all bible stories, the beheading of Saint John the Baptist!  If I learned anything from watching Nicholas Ray’s King of Kings, it was that John was kind of a dick and Salome was super hot, so I don’t know, I don’t think you can really assign blame to either side on this one.  Besides, he started it with that “daughter of adultery” stuff.  Either way, Katie and I both agree that biblical necrophilia in front of naked servants deserves not one, but TWO hand pentagrams.

Next up we have my brother and I waiting to see Megadeth.  The newly christian Dave Mustaine only played the usual 4 pre-Countdown songs, and kept throwing up the horns thumbs out, but he actually put on a decent show, even better than I remembered from the first time I saw them 15 years ago. 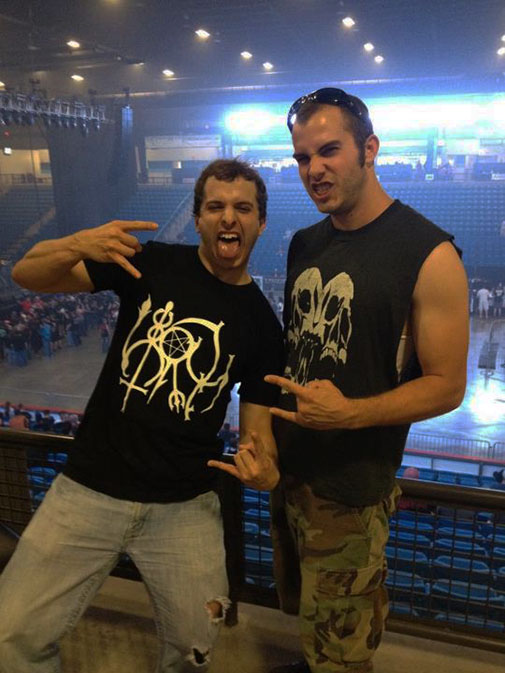 The most blasphemous thing you could ever imagine, as bad as saying “god damn it” or killing someone, that’s right, A GRAVEN IMAGE.  Unfortunately, this picture was taken only moments before a skunk haired Moses showed up and shut down a totally bitchin’ party.

Finally we have Sho and I at board game night.  We’d maybe had a few by this point due to the fact that it seems Sho was having problems with his hand pentagrams (though this was taken before the night turned homoerotic).  Still we were sober enough to play some Galaxy Trucker, so things were good. 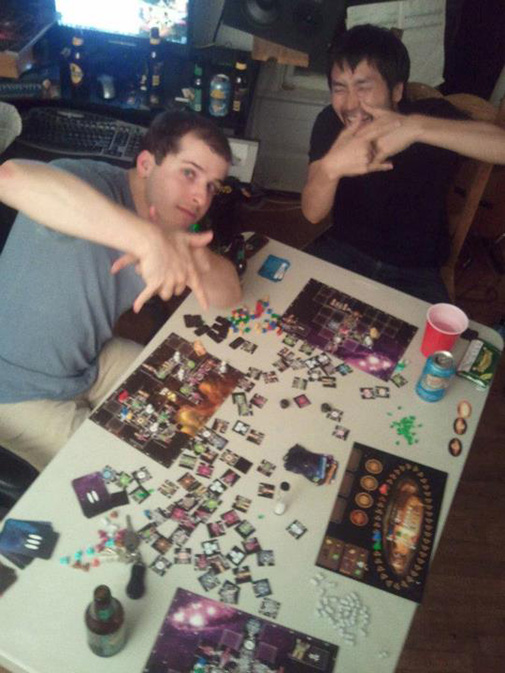 Us playing the Metal as fuck board game CHAMPIONS OF FAITH!!!  From www.boardgamegeek.com:

“This game allows you to assume the character of one of six great heroes of the Bible. You’ll play the game as Moses, David, Abraham, Noah, Joseph or Joshua “against a backdrop of Biblical Authenticity.” You’ll face trials and tribulations and experience through game play what the real human characters might have faced thousands of years ago in their true lives.

Run the Good race, fight the Good fight, be the first to enter the Hall of Faith and win the game.”

The real question is which character would be the most metal to play as.  While David has history’s first “critical hit,” that’s more nerdy than metal.  Moses does have a Metallica song written for him, but I suppose I’d have to go with Joshua, considering he brought down the Walls of Jericho by playing his music too loud.

I stand by my statement about Middle Earth Monday.

I basically exclusively read MEM, as well as MBM (but this is only because there may be a cursory mention of MEM as was with today’s). What Is Best In Life features far too much Metal, although the love of Metal does not seem to have seeped into MEM. Of course, a nightmare scenario for me would be if Isley wrote a MEM focusing on the accuracy of inclusions of Tolkien’s geography in Metal. I’m not sure I could cope with that.

Boy, you know, no troll, that’s a pretty good idea for MEM…