The metal world was rocked recently with news of the death of Slayer guitar player Jeff Hanneman.  For those who have been living under a non-metallic (or metaloid) rock, Slayer is the best thrash band of all time, which makes Jeff Hanneman the greatest songwriter of all time.  Hell, Brian’s brother “Banjo” (not his christian name) once informed me that Hanneman was born under the sign of musical inspiration.  I even once got Hanneman’s guitar pick at a Slayer concert!

Anyway, the dude is awesome, and it’s a shame he’s dead, even if Slayer hasn’t made a decent record since 1986. Yeah, see what I did there metalheads? That’s because I’m KVLT.  Because liking the most famous thrash album of all time is KVLT I guess…

All that being said, I thought I might take a little time to poke some fun at the newly departed.  Hanneman’s a cool dude, I’m sure he wouldn’t have minded.  Thus, I give you my variation on the “metalhead problems” meme, Newly Deceased Jeff Hanneman Metalhead Problems:

First up, we have a reference to the Westboro Baptist Church and their supposed decision to picket Haneman’s funeral.  I suspect that they never said they were going to do that, they never seemed to give a shit about picketing the funerals of actual enemies of god after all: 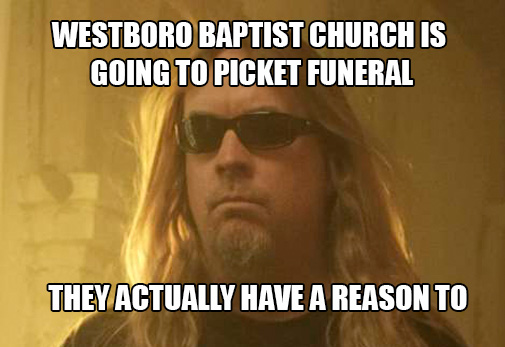 Hanneman was one of those guys who had a large collection of Nazi memorabilia. He even wrote a song all about Josef Mengele and NEVER pointed out that Mengele was a bad dude.  Honestly, I’m sure a lot of his best friends were communists, but it’s easy to poke fun anyway: 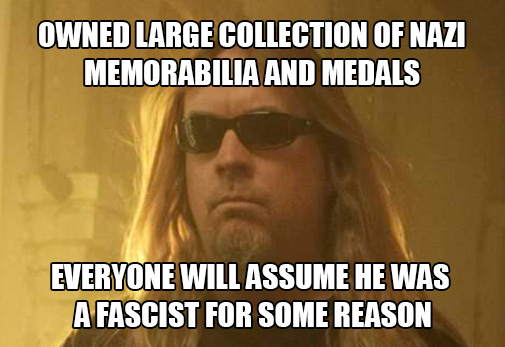 Ok, I know this one is kind of mean, and alcoholism is no laughing matter, but, if we have to be honest, drinking yourself to death is really one of the most metal ways there is to go: 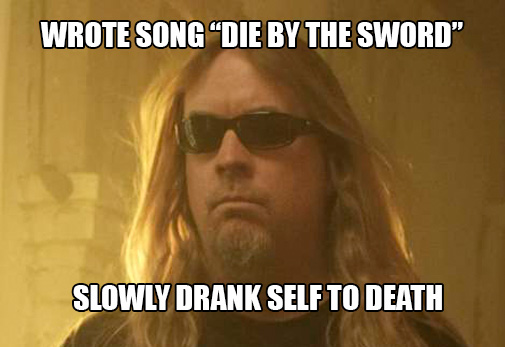 If you don’t get this one, you need to reacquaint yourself with the third best song on Reign in Blood: 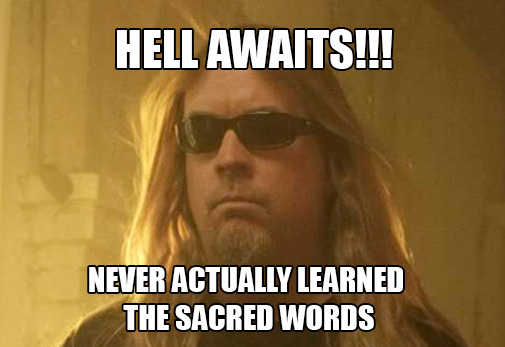 Finally, we’ve got the original metalhead problems dude reminding all you out there shouting “TOO SOON!” how totally non-KVLT you are acting: 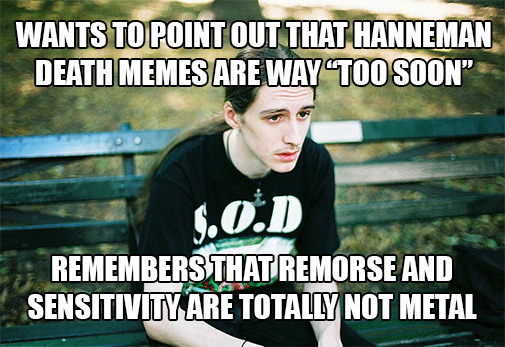 Willie von Unruh was a scientist during the 1920s who invented an energy machine he called the “Stromerzeuger”  that used fucking magnets to motherfucking SPLIT ATOMS to create near limitless energy.  His designs were stolen by nazi scientist Hans Coler at the end of the 20s when von Unruh died of mysterious circumstances.  Unfortunately (or, fortunately for the allies), Coler was never able to reproduce von Unruh’s “S-machine” and thus the secret of its miraculous energy potential was lost for all time, potentially winning the war for the allies.

Meme “could have been worse” hobbit?

People seemed as quick to shit on The Hobbit as they were to heap praise upon The Lord of the Rings when it came out.  And yes, I’ve called them both some form of “middling Hollywood megaplex fare” on this blog plenty of times, but, you are correct, it definitely could have been worse:

Would fig newtons make you gassy?

I think on one of my “farting” Mailbag Monday posts from way back I made some reference to “fig newton farts.” Ever since, I’ve gotten this question over and over again.  I suppose it is finally time to lay this rumor to rest.  As someone who has regularly eaten “the whole goddamn pack” of fig newtons, I can answer this question definitively.

No more than normal anyway.

Though I’ve lived in the Kansas City area for quite a while now, I only went to Worlds of Fun for the first time 5 years ago or so.  And it didn’t take me long to figure out where the cameras on The Mamba were, which led to many attempts to troll the automated pictures with increasingly more horrible and inappropriate pictures.  Good times! 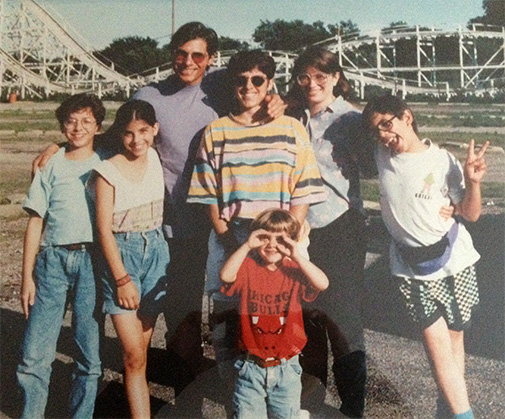 My mom, dad, sister, brother, aunt, cousin and…ME!  Each one of us seems dead set on proving that the early nineties were the absolute worst when it came to fashion.

So disappointed that the Star Trek uniform didn’t make another appearance here.

My family and I would appreciate it if you could refrain from repeating anything Brandon’s ever said to you.

Googling “metalhead problems” in order to figure out wtf you’re talking about now points to isleyunruh.com on the third link!

(Okay, that’s not true, but wouldn’t that be neat? Also, there is a “metalhead problems” meme, I learned today!) (Also, why are like 94% of them weirdly, unnecessarily sexist?) (Um, also, my condolences.) (Also your sister is always hot.)

Have I taught you so little about metal that its rampant misogyny and homophobia is surprising?

So where does my sister rank on a hotness scale of 1 to “My dad”?

Hehe, and I believe you said he is still going by “Banjo”?

It was under my clothes…that’s why I had to pull my pants up so high, to cover up my belt tricorder.

Well, of course! On the bright side, it’s much better than the nickname he had in high school, “Cockroach.”

Magnets? How do they work?