For every delightfully mischievous Pippin or Merry, there are plenty of hobbits that are just plain irritating.  I’ve taken the liberty of drawing up my list of the 10 absolutely worst hobbits when it comes to being annoying:

It’s a wide ranging list, featuring everything from hobbits that don’t return books you lend them to hobbits that try to enslave all the other hobbits while not recycling.  Of course none of that is as bad as the hobbits that are too helpful and too whiny respectively.

What is special about black metal?

I’ve discussed the illicit pleasures found in black metal before, but sure, I’d be happy to go into even greater depth as to why I think the black metal aesthetic is one of the most brilliant…

Why is black metal retarded?

Ohhhh…you meant, what is “special” about black metal.  Well, first of all, us black metal fans don’t like to use the word “retarded,” we prefer, “musically challenged.” And honestly, if you would take the time to look past the surface, you would see the beautiful music that is hidden within a body of work that is, in all actuality, quite special in its own way.

So, seriously, let’s cut out all the retarded black metal jokes.

Damnit! What did I just say???

Although, I guess I have posted 100% FREE PUSSY PICS, no credit card required! before…so maybe you weren’t too far off after all.

I”m no stranger to role playing games, and I’ve experienced plenty of epic ones in my time.  However, just last weekend, my semi bi-monthly The One Ring Middle-earth Role Playing Game ended up getting pretty goddamn epic.  But don’t take my word for it, just look at our post-session map of encounters (click for a larger picture): 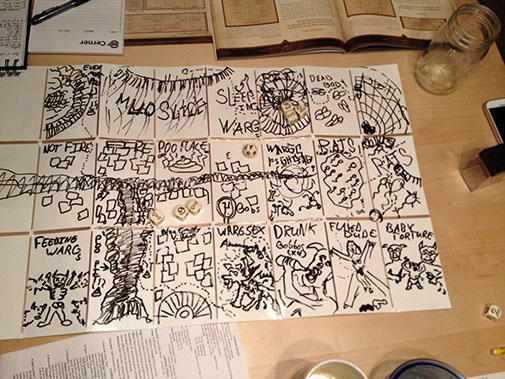 If you follow the Family Circus style dotted line trail, you can see that we made our way down a mud slide, tip toed around a sleeping (or possiblyhowling based on the picture) warg, swung over a pit that totally didn’t contain a Sarlacc, desecrated the newly dead, swung over a second pit that also totally didn’t contain a Sarlacc at the bottom and blundered straight into a next of rats (or sperm based on the picture).

I then played a merry tune on my hurdy gurdy to draw the sperm rats into the next area while we snuck away to the south where we found a totally dead flayed dude.  Well…he wasn’t dead yet, in fact, he may have been getting better.  Still, death comes to us all, so after we bluffed our way past some drunk Bobbos (the DM claimed he was trying to write Gobbos upside down), we were forced to throw the flayed dude who probably wasn’t dead at all into the path of two rutting wargs while we looted some Goblin tents.

Then we sailed down a river of poop and around a big tent fire to safety.

I would say the most shocking thing about a night full of shocking things was the fact that we only ended up drawing 5 dicks on the map.  And by “we drew 5 dicks” I mean, I drew 4 (and one set of warg teats), Carol drew 1, and Shena drew 0.  Come on Shena, try to keep up next time.

You know I’m no artist! I don’t draw!

Everyone can draw a penis Shena. EVERYONE. Just follow the guidelines found in Mailbag Monday 28!

That’s not really an excuse, Shena. I was “drawing”.

I think the “I should count to potato” pic should have the black metal guy holding the “six-sided pentagram!”