Though Unholy Black Metal and Gangsta Rap are actually quite similar, there is not a lot of actual black metal gangster rap out there.  However, the one notable example of just such a fusion came from one of last year’s best albums, Peste Noire’s self titled 2013 release, with the song “Niquez Vos Villes.”

I don’t know what else you would call this section but rap:

And while this section from later in the song is probably more just chanting than rap, it is an excellent example about how ridiculously brilliant Peste Noire’s newest album really is:

Not sure what the dude is rapping about in those clips, but I’m sure it’s a message of tolerance and acceptance for all cultures and styles of music.

Most unbreakable alloy for a 3 foot sword?

I’ll tell you what I told my ridiculously pedantic role playing group last week during a session of my homebrew role playing game based on the hit USA TV series Burn Notice.

After being asked what the basement was encased in, I replied: “Pretendium.”

Look it up, it sounds like exactly what you are looking for!

Sounds pretty badass!  But do you mean regular lasers? Or water lasers?

Because, after a particularly heated argument with my ridiculously pedantic role playing group during a recent session of my homebrew role playing game based on the hit USA TV series Burn Notice, I would like to point out that using water to achieve the precision and cutting power of a laser is TOTALLY a thing:

Let’s fucking argue about it?

Though this phrase it meant to sarcastically shame the addressee into NOT arguing about it, I would say, that, in my experience, if you use this phrase with anyone, you are almost guaranteed to have an argument.

This phrase is also best avoided during sessions of my homebrew role playing game based on the hit USA TV series Burn Notice while playing with my ridiculously pedantic role playing group.

I assume you are talking about the incident during the men’s figure skating finals in Sochi this year when the figure skater Paul Ledney executed a perfect double lutz to win gold only to test positive for illegal satanic power just hours before the medal ceremony.  Still, you have to admit, it was a beautifully performed maneuver: 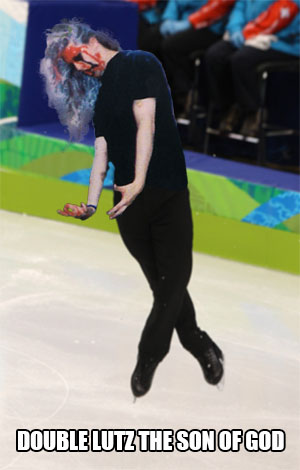 Water with the cutting power of a laser is not the same as a “water laser.” Do you even know what a laser is, Isley? THOSE LETTERS STAND FOR THINGS.

As I said during game night, yes, they stand for Liquid, Abrasive, um… SER.