No, you can’t.  And I really think you should take some time to learn how a search engine works…even if you could heal like Wolverine, google doesn’t care.

As many of you may know, I have been doing origami for a while.  And while I am pretty new to designing my own models, I actually have created my own Wolverine model.  So, because you asked, I went ahead and drew up the easy folding diagrams* to post in response to your letter…enjoy! 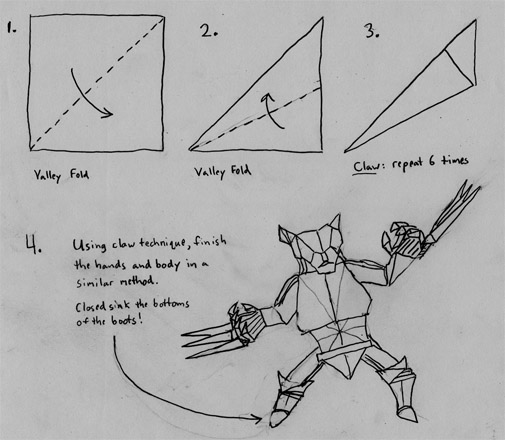 *I’ve taken a few shortcuts in the diagrams, but anyone familiar with folding origami should be able to fold the full model no problem.

Once upon a (specifically medieval) time there was a princess who, despite the best efforts of her evil step-family (who met horrid deaths that were massively toned down to stern scoldings for this version of the fairy tale), lived happily ever after (once she found a manly prince to give her life real meaning).  Also, the animals in this story can talk.

I normally have no idea who writes the letters for Mailbag Mondays, but I think I know who wrote this one, and if this is who I think it is, I think I know what they are referring to.  So, for the last time, I’m sorry for throwing up on your sheets.  And then again on your mattress after you had removed the sheets and went to sleep on the couch.  And I’m sorry for flipping the mattress over to try to hide where I threw up and managing to cover your box spring in throw up.  And I’m sorry for then throwing up on the other side of the mattress too.  Now will you let it go?  Sheesh!

That’s it for Mailbag Monday this month!  Tune in the first Monday of next month when I discuss “A day the fart wars happened”!

Thanks to your simple-to-follow instructions, I was able to complete my very own origami Wolverine!

Thanks for sharing your model!

Awesome! I was worried there would be confusion with the alternating valley folds in steps 1 and 2!

And for anyone interested, there is a pretty good actual origami wolverine here, but I don’t know how to get diagrams.

You forgot Chicken in a Biscuit farts…NOTHING beats those.