Good question, the giant photograph of my face on the side of the old Round Corner drug store at 8th and Mass has definitely raised a lot of questions.  It’s pretty simple really–my friend Rachel has been doing this project where she photographs people from my city and has gotten a grant to get a bunch of her pictures blown up in order to hang around the downtown.  You can check out her website HERE…I hear there is even a book deal!

Unfortunately, some of my more juvenile friends have not shown themselves capable of treating my picture with the respect, dignity, and reverence it deserves.  It hadn’t been up for more than a day before I was texted this picture: 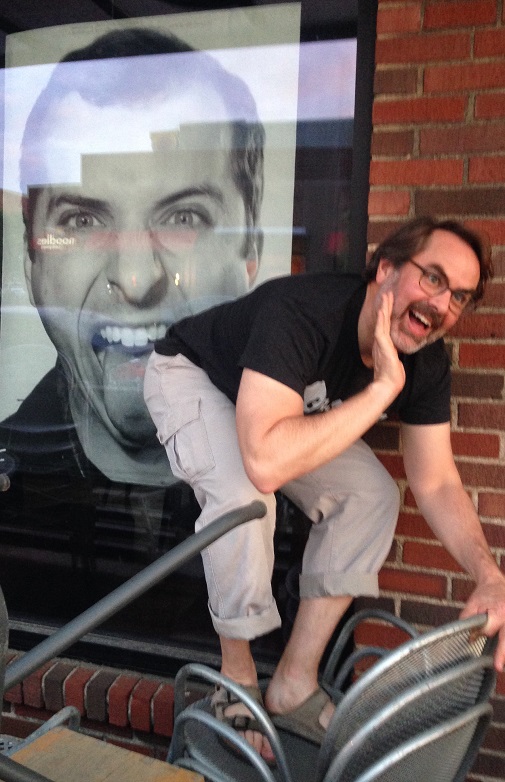 Then, after taking to Facebook to politely remind people to please show a little class when they are admiring my picture, I got this picture sent to me: 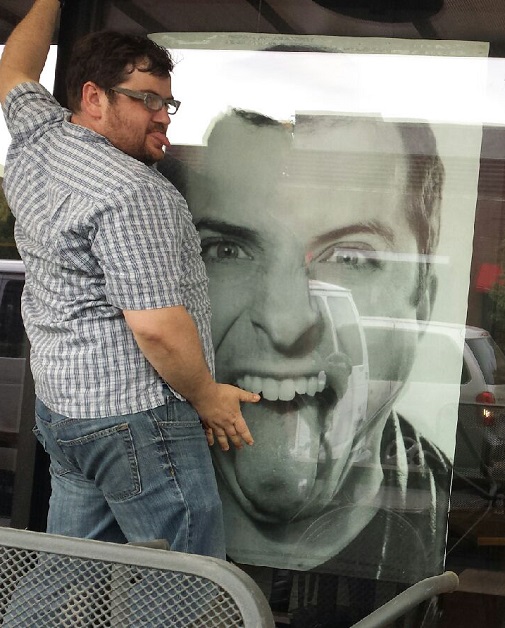 At this point I’m going to just have to go over there and deface it myself before someone beats me to drawing a cock on my forehead.

“Jesus man, I had no idea how many records you have.  [pauses for a beat]  Do you have any good ones?”

HAR HAR.  First, sick ice-burn Brian.  Second, I will have you know, my record collection is ONLY good albums, and consists of a wide variety of LPs from a huge selection of musical genres!  For instance, I have plenty of classic Norwegian second-wave black metal albums like Ildjarn’s 70 minute self-titled debut:

Not that I’d ever over-privilege the Norwegian scene.  My collection is full of lost gems like the classic first-wave Peruvian black metal band Hastur’s Secta Hereje too:

I mean, sure, I still haven’t figured out if that album is supposed to be played on 45 or 33, but, it sounds pretty sweet both ways, so no big deal!

Hell, my collection is so diverse, I’ve even got a few choice albums from the French Les Legiones Noires Black Metal scene like Vlad Tepes’ 14th (and final) album Morte Lune— an album that really shows how far they progressed in their endless quest to achieve the perfect production value:

Do I have any good ones in such a diverse and discriminating collection? I think the answer is pretty clear–so let’s try to ease up on the lip shall we?

Oh, and, also, I’ve got a copy of Simon and Garfunkle’s greatest hits.  It’s actually pretty ok too I guess.

Ok, fine, I looked it up, apparently it is: “bīō-pik,” NOT “bī-äpik.”  I guess we can file that one away in the SOLVED file along with Penelope and Mise-en-scene.

Jean-Michael Anger Thor is the driving force behind one of the greatest rock bands of all time, Thor.  In addition to being a singer, songwriter, filmmaker, writer, Mr. Canada, and a gentle yet thorough lover, he is also soon to be the star of his very own documentary:

Hopefully this will do what that Anvil documentary did for them and actually bring Thor down to my neck of the woods to sign my vinyl copy of Only the Strong (a very GOOD ALBUM, Brian).

Ah, yeah, this is one of my favorite writing sites.  It has nothing but the best examples of expository writing on the internet, collected in one convenient place!

Yeah, yeah, that was a shit joke, but, you know, it’s late and I’m calling it, this Mailbag Monday is officially done!

So all that advice on how to properly care for records and you want to have some jabroni deface the cover. You learned nothing from me. Sealed or better for life.

Who said anything about signing the cover? I want him to sign the VINYL.

I agree with Willie that the Thor vinyl should definitely remain sealed.

What did I say about that lip??

hell brother, the hastur lp is meant to be played at 33, I released it on my label so I should know haha,, glad you like some 80s inspired hellhammerish/ Celtic frostish, inspired metal…satan speak !!!

Hah, I was (partly) joking, I finally figured it out about halfway into the album…I did listen to the first half at 45 though…just imagine how insane it sounded at 45!

haha I was jocking to haha..I usually don’t think people are that prosaic!! but I am glad as I said you like it. I just released another Peruvian 80s black death demo by a band called Satanas “blasfemia” from 1989, for people into sarcofago, beherit, old morbid angel. it is a 7” and this time it is supposed to be played at 45 rpm. By the way awesome blog. I like reading these types of blogs while eating some tiramisu my wife makes !! cheers brother