Mailbag Monday 82 – What is wrong with you? 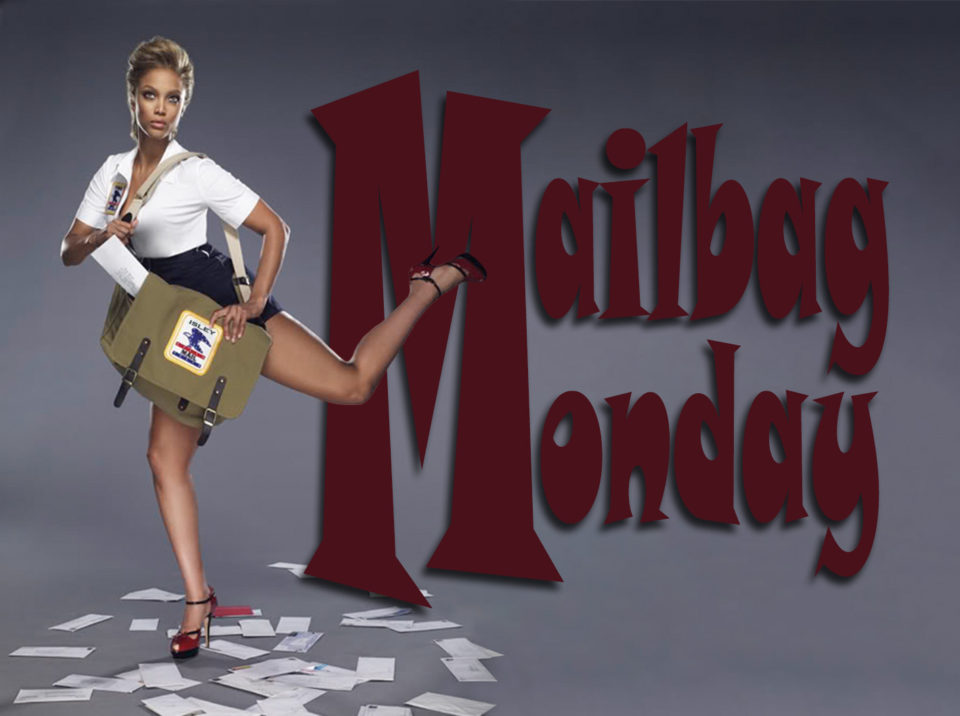 To put any fears to the contrary to rest right off the bat, Mailbag Monday will NOT be discontinued in this new, less weekly, era of isleyunruh.com!  While it might not come on the first Monday of every month, I will nonetheless continue with the feature going forward.  It is, after all, an excellent vehicle for talking about myself, one of my favorite pastimes.  So, today, we have Nadine, asking me the question that has been on everyone’s mind since I started sharing my thoughts on the internet for to read.

“What is wrong with you?”

Alight, first of all, there is not a goddamn thing wrong with me, I’m the best!

BUT, my slight inability to slight my wonderful self aside, Nadine was not asking the question in the broader sense, specifically, she was referring to my newly collected and alphabetized Mini Movie Review section when she sent me today’s question in gchat along with the following screenshot: 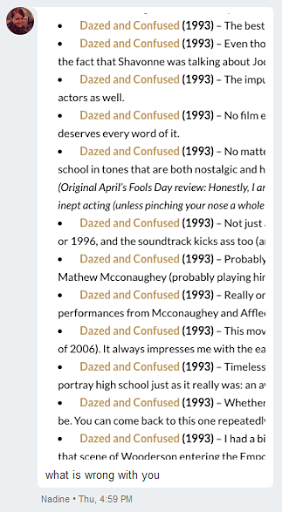 You see, from January 2009 to December 2015, I wrote a small review of every single film I watched–no matter how many times I rewatched it, I kept writing new reviews.  So, when I collected all these reviews for the new website in one GIANT (it turns out I wrote 1600 movie reviews in those 6 years) list, it had the (unfortunate?) side-effect of showing my readers just exactly how many times I had rewatched certain movies during that time period.

While there are plenty of “this explains so much” moments to be found in my movie watching habits over the last half decade, apparently, for Nadine, what both stuck out to her, and offended her to her very core, was the amount of times I watched Dazed and Confused over that time period.

First of all, 12 times in 6 years is HARDLY a lot.  That is, if my math is correct, barely twice a year!  And sure, this data doesn’t take into account the great Dazed and Confused rediscovery heyday of 2006, or the viewings over the last year when my website was down, but, does it really matter?  We are, after all, talking about the single greatest film of the last 50 years, if anything, 12 viewings is HARDLY enough.  How many times have YOU watched it in the last few years?  Can you even tell me how many hours of drums one could not handle on strong acid?  Or what is the most bitchin’ time one could have in their life?  Or the true significance of the Abraham Lincoln dream?

I am starting to think that maybe you’ve just never gotten past the sniffin’ butt stage when it comes down to truly appreciating the pinnacle of modern film-making.

And, you know, the more I think about it, this is the same bullshit you are always trying to pull. If it ain’t telling me I can’t watch 27 Dresses that many times, there’s some other movie you’re gonna try and shame me for rewatching. I gotta do what Isley Demetrius Unruh wants to do man. Let me tell you this, the older I do get the more rules you’re gonna try to get me to follow. I just gotta keep livin’ man, L-I-V-I-N.

So wipe that face off your head…dominant female monkey motherfucker!

I regret nothing, not even inadvertently fellating those popsicles at Nadine’s that one time either.

I’m glad this finally made it into Mailbag Monday after years of asking. I know I’m not the only reader with this question.