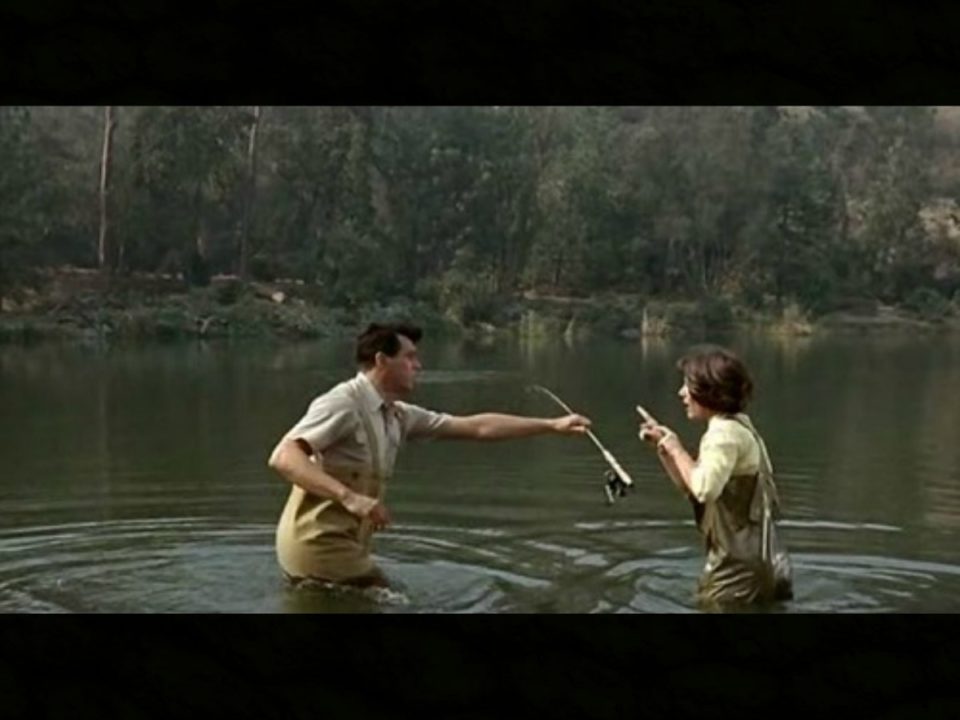 Howard Hawks is known as one of the all time great Hollywood directors.  And while his films from the 30s and 40s seem to get most of the attention, the man was still cranking out superlative work well into the twilight of his career.  Today’s film is an excellent example of one of his brilliant late-period masterpieces.  The critical consensus seems to be that Man’s Favorite Sport? is a forgettable remake of Bringing Up Baby, released at a time when it would have already been considered old-fashioned had it been released a decade earlier.  It is a movie where, at one point, a wild bear ends up accidentally riding a motorcycle after a crash.  And yet, if you ask me, this film easily ranks up near the top of Hawks’ amazing body of work, and, if you ask me, it is also pretty much an all around improvement on the classic Bringing Up Baby.

The potential pitfall of both this movie and Bringing Up Baby, is the problem of the “manic pixie dream-girl.”  The term, described by film critic Nathan Rabin as: “that bubbly, shallow cinematic creature that exists solely in the fevered imaginations of sensitive writer directors to teach broodingly soulful young men to embrace life and its infinite mysteries and adventures,” has only been around for the last decade.  However, the character has been around a lot longer than that, and perhaps the earliest and most grating example is Katherine Hepburn’s character in Bringing Up Baby.  Her character is so willfully ignorant, tunnel-visioned, and just plain insane that I find it almost impossible to root for her to end up with anyone, even someone as gormless as Cary Grant’s simpleton paleontologist.  So, I can fully understand why Hawks returned to this movie 25 years later, perhaps in an attempt to right some of the wrongs done on the institution of love by Bringing Up Baby.

Not that Man’s Favorite Sport? is a straight remake.  The broad strokes are there, as well as many of the details (the car mixups and dinner dress mishaps remain), but the feeling is more one of fleeting deja-vu than any kind of redundant plot retread.  The cast is the first improvement.  I love Cary Grant as much as anyone, he’s one of the three greatest screen presences our country has ever produced.  But, let’s be honest, the dude occasionally found himself mugging, and Bringing up Baby is one of the most egregious examples of this.  Rock Hudson, despite seeming like a bit of an oaf to the casual observer, was actually a fine actor with impeccable comic timing, and does a much better job as the hapless lead. And, while Katherine Hepburn was undoubtedly a fine actress–I’ve never loved the idea of her as a love interest.  Maybe this is skinny shaming, but she just looks a bit too much like the Red Skull in a wig for my tastes.  Paula Prentiss might not be a better actress (though she does a fine job), but she had a better script to work with here, and (along with her German friend “Easy”) is a whole hell of a lot sexier as the love interest.

Sure, there are some silly bits (again, that motocycle riding bear, some cartoon style water running), and some of the jokes are laid back enough that one could, almost, call them lazy, but really, the fixing of Katherine Hepburn’s character from Bringing Up Baby can’t be praised enough.  Prentiss in this film, is less insane idiot, and more of a goofy troll.  She’s still a bit of a Manic Pixie Dream Girl, but only on the surface.  She’s far to Hawksian of a woman to ever lose sight of herself as character with agency and intelligence.  All of her more frustrating behaviors against Hudson stem more from her social awkwardness than they do from her being written as some kind of MPDG alien robot.  Even at their silliest, both her and Rock are much more like actual human beings in this film than Grant and Hepburn ever were in Bringing Up Baby.

Also, Bringing Up Baby is, honestly, a pretty great movie, so the fact that it was improved upon so much with this film is really quite impressive.  I don’t know how many times I’ve seen Man’s Favorite Sport, but it is definitely more than Bringing Up Baby, and every time I revisit it, it’s one of the most cinematically delightful 2 hours I’ve ever had.  And I don’t see that changing at all in the years to come.