The Many Nuanced Themes of Garth Ennis 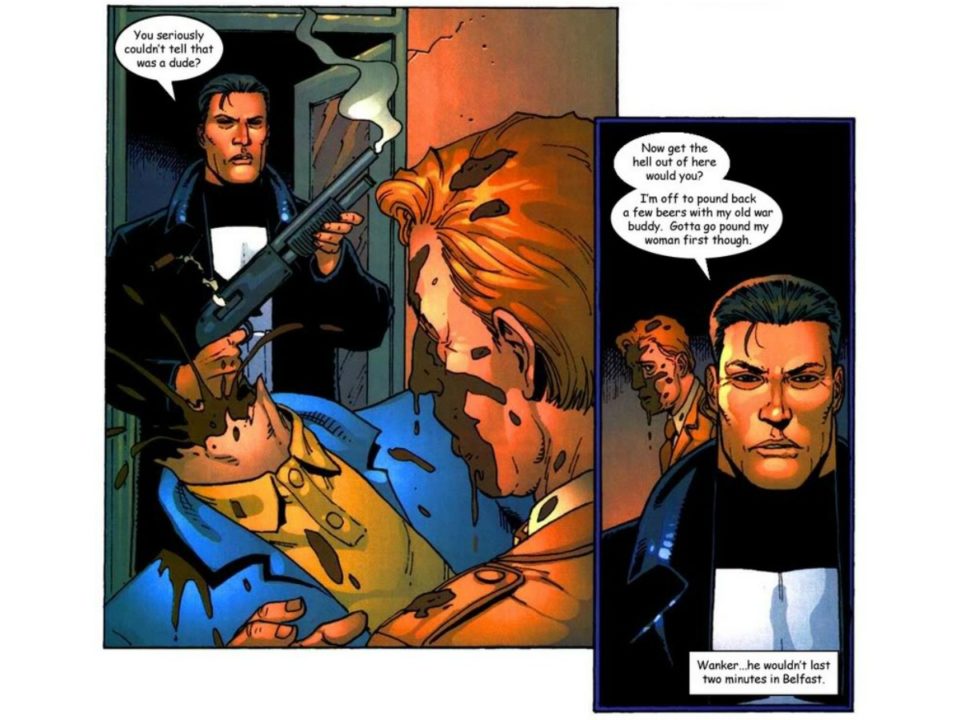 Garth Ennis is one of my favorite comic book writers. But after reading his entire runs of Hitman, Preacher, Hellblazer, Punisher, Punisher Max, Punisher Max Presents Barracuda (max?), War Stories, Adventures in the Rifle Brigade, Fury and The Boys (all of which are more or less recommended except for the last one) I’m starting to see some familiar themes cropping up over and over again. Now I’m not saying this is such a bad thing (I’m a Howard Hawks fan after all), but the following list of his most common themes might be helpful to see just how your favorite Garth Ennis comic ranks on the “yep this is an Ennis book alright” scale.

For every dismally written female character in his books, there are always a couple of totally sweet bits of male bonding. Usually it is just along the lines of “pound back a couple pitchers of beer and then kick the ass of every other dude in the bar”, but Ennis actually does have the ability to be a bit more subtle than that. But no matter how it is done, you aren’t going to find an Ennis book without a couple of dudes slapping each other on the ass.

Speaking of ass-slapping, there is no better place for dudes to do it than while shooting the shit out of [Vietnamese, Arabs, South Americans, etc]. If Ennis’ books aren’t directly set in a war, you can bet your (slapped) ass that an old war buddy is going to show up at any moment.

They say write what you know, and Ennis sure knows Ireland. Mostly he knows that things are all fucked up over there what with the IRA, oppressive English and the new watered down bottled Guinness draft. He’ll also make sure to do a “special Irish issue” in all his series just in case you missed the last 10 times he did that issue.

As mentioned above, for as much care and attention is devoted towards fully fleshed out male companionship, Ennis seems to have a hard time writing women as anything other than moist holes with tits. Of course, as manly men begin to question some of their more confusing feelings towards their buddies, the soft embrace of a woman who just can’t get enough is exactly what they need to get their head back in the game. Hell, even the Punisher gets some when Ennis is writing.

Ennis must issue GHW quotas to his artists, because there doesn’t seem to be many other ways to die in his comics. Actually that is not true, Ennis has no problem coming up with horrific ways to kill someone (everything from “having your intestines stretched out to fill all the branches on a tree” to “being smothered by a big fat dude”), but the GHW is the gold standard of spectacular deaths. According to the internet, the series Preacher has a grand total of 172 GHWs in the entire run (an average of 2.6 GHWs per issue).

For every manly man with his sexually voracious woman and bosom buddy at his side, there is always at least one totally pathetic dude. The guy who can’t seem to walk down the street without a Girl Scout pushing him down, pantsing him and then making fun of his small penis as she stomps his balls into the pavement. The reader after all can’t forget how much totally more awesome the hero is than that sad fuck.

This one often goes hand in hand with the Pathetic Dude (not always though). According to Ennis, there is nothing more hilarious than a guy who goes home with the chick that everyone but him knows is a man and gets a good buggerin’ for his trouble. Just wait for the 6’5″ hairy bodybuilder type with an adams apple to walk into a bar in a mini skirt in an Ennis Comic and say to yourself “oh man, here we go again, someone is TOTALLY gonna get it up the ass!” (and NOT in a manly slappin’ way!)

So to see what we have learned, let’s take a look at the most recent Ennis comic (came out yesterday) and see how it ranks:

Punisher Max presents – Barracuda (MAX!) issue 3: In this issue, Barracuda picks up his old army buddy “Fifty” at the airport to help him with his plan to shoot the shit out of most likely pretty much everyone else in the book. Fifty is a very unconvincing cross dresser as well, and after they catch up on old war stories, Fifty proceeds to get the head boss to think he is a woman and sleep with him (much to everyone else’s amusement). Meanwhile, Barracuda is off telling Wanda Lube (star of Buttseekers 2, 4 and 7 and current record holder for the most double anal in a 24 hour period…who Barracuda totally banged last issue) and “Digby” (a pathetic little man who used to be Barracuda’s prison bitch…who Barracuda totally banged last issue) exactly how they are going to hold up their ends of some crazy plan he has to make himself lots of money. Suddenly their compound gets attacked! Fifty and Barracuda grab some giant machine guns and inflict at least 6 spectacular GHWs as they kill a bunch of dudes. The End.

Final Score: 6/7 I was really expecting some totally hardcore Irish dude who doesn’t say much but kicks a lot of ass to show up…maybe next issue.

Disclaimer: While there is only a small amount of exaggeration in this post, despite his flaws, Ennis can still be a pretty good time. Go read Preacher…you’ll see!

Well, I know what I won’t be reading this week.