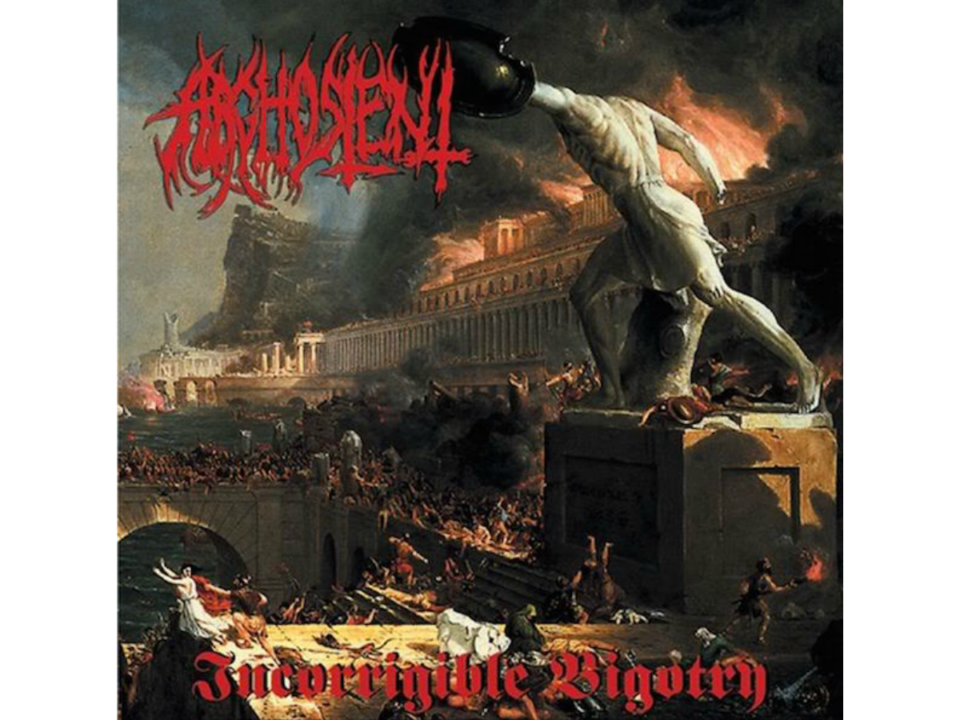 One nice thing about the slowly growing infestation of really racist bands in the extreme music underground is that, by and large, they all pretty much objectively suck.  I mean, even that Peste Noire album I covered last month, when it comes right down to it, really kind of blows.  Thus, Arghoslent is the bane of all metalheads who nobly attempt to only listen to music made by artists with whom they share the same ideological beliefs.  This is because, unfortunately, Arghoslent is kind of really pretty goddamn good–they even know how to play their instruments!

The album opener, “Flogging the Cargo” (I know, I know, I warned you!) sets up what Arghoslent is trying to do on this album very well:

The funny thing is, even though I’m not into melodeath, and really not into tech death, and, hell, I’m not even all that into death metal in the first place, despite all that, I really love Arghoslent’s style (of which this album is probably the most focused version).  It’s just a nonstop series of really great, and often quite epic riffs.

The style is a mixture of many different elements.  The furious riffing on songs like “Archaic Invincibility” bounces from black metal to heavy metal and hits just about everywhere in between:

There are even breaks for simple, almost psychedelic, solos over almost proggy riffs like in this clip from “Quelling the Simian Surge” (you get the sense that someone got ahold of a thesaurus while writing the song titles on this album):

The riffs often have an almost bouncy feel to them.  Of course, I prefer to describe riffs like this one from “Heirs to Perdition” as “galloping” rather than “bouncy”:

As you can tell with all these clips, most of this album bounces/gallops/blasts along like this clip from “Hereditary Taint”:

Though there are still plenty of slower and mid-pace sections to vary things up like this clip from the instrumental title track:

And, the whole time, as in this clip from “In the Purging Fires of War,” they never once forget to be fucking epic as shit during all the effortless riffing:

If all this sounds like your thing, I highly recommend all of Arghoslent’s albums.  Of course, it will be up to you to figure out how to sleep at night.

The production is kind of sterile and depthless, and the vocals are pretty generic (which, admittedly, happens a lot in death metal). Musically, though, there are a lot of good ideas here. I like the variation, both rhythmically and tonally.

The bad news is that, thematically, this steps over my line in the sand. I mentioned to you recently how I was finding some Cannibal Corpse lyrics really disturbing in their misogyny. But as upsetting as some of the themes in this kind of music can be, at least with most bands it’s not every single song.

I do appreciate the clarity of the production, I think it really helps with this kind of riffing.

I thought about covering Arghoslent’s first album here (which is not obviously racist), but that seemed disingenuous since I like this one better and it’s not like their politics are a secret.

I still think Cannibal Corpse is possibly lyrically worse since everyone knows this racist shit is pretty reprehensible, but misogyny seems to be a lot more insidious and accepted, especially in death metal. Not that that would stop me listening to Cannibal Corpse. Their shitty music does a fine job of that already… 😉

Ah, yes, the crafty and subtle misogyny of songs like “Entrails Ripped from a Virgin’s Cunt” and “Stripped, Raped, and Strangled.” Stuff like that just tends to fly under the radar. 😉

I think that’s exactly it. Most metalheads hear a song titled “Flogging the Cargo” and (with good cause) refuse to listen to it. And yet, the same people hear one called “Stripped, Raped and Strangled” and laugh it off as “oh, those rakes in Cannibal Corpse, so silly with their over the top song titles!”

And yes, Arghoslent probably actually are big racists, while the Cannibal Corpse guys probably aren’t actual rapists. But I would argue that Cannibal Corpse has done far more damage to humanity with their lyrics than Arghoslent has done with theirs. Sure, Arghoslent breeds people like me who pretend it doesn’t matter if the music is awesome and thus increases their exposure that much more. But Cannibal Corpse has spread the idea that over the top lyrics about violence specifically towards women is not only “all in good fun,” but nothing to get all that worked up about.

As long as people are out there laughing about Cannibal Corpse song titles (and I’ve heard both men and women do just that), then I would argue that Cannibal Corpse and other similar bands are the ones people should take a stand against if they feel the need to draw an ideological line in the sand when it comes to the personal beliefs of the artists that make the music to which they listen.

It’s a tricky game. To what extent are we judging their beliefs as opposed to their espousals? At what point do we start to take seriously a gimmick band that sings about zombie mutilations, or whatever? Do Cannibal Corpse sing about rape because they’re misogynists, or because sexual violence in any form is repugnant, and they want to sing about the most repugnant things they can? Probably both. The problem with sexual violence as a theme is that it’s never going to simply be about violence against a person; it’s going to be about violence against a class of persons. If the sexual violence is against women, they’re misogynists; if it’s against men, they’re homophobic. Would this be a non-issue if Cannibal Corpse protagonists were equal-opportunity sexual murderers?

But yeah, the reason people laugh at these song titles is because views like the ones espoused in Cannibal Corpse songs (though not necessarily held by their members) are over the top to the point of being comical. Only serial killers and sexual murderers are proponents of the kinds of actions taken in those songs. So we dismiss it as morbid fantasy. Even though I find their lyrics uncomfortably disturbing as it is, I’d be more disturbed if they were toned down to the point where I actually thought they were trying to sell me on a viewpoint.

But since racism is so much more prevalent in the public sphere, we can’t put it in the “over the top” category. We’ve both probably known people that hold those kind of views about members of other ethnic groups. It hits a lot closer to home. Never in my life have I known anyone to talk with any seriousness about the kinds of things you’ll find in a typical Cannibal Corpse song. Bear in mind, I’m not defending them. Their lyrics really are awful.

I’m not really trying to make a coherent argument here, because I think it’s silly for either of us to try to defend either side of this issue. You’ve got chutzpah, though, trying to cast Arghoslent in a better light by pointing out that someone else might be worse.

Heh, as I told Shena: “Damnit, maybe this is why I shouldn’t write about racist bands…because I get tricked into defending their lyrics in the comment section.”

And while racism is quite prevalent in the public sphere (more than sexism? I actually don’t think so), and I’ve met plenty of racists, I still think a lot of this stuff easily fits in the “over the top” category too. These bands might be full of actual racists, but it’s an obvious marketing ploy too. Even talented bands like Arghoslent or Skrewdriver (debatable to some I suppose) would not be nearly as well known were they not the architects of their own notoriety. I think that’s part of the reason for the popularity of this kind of stuff in the metal underground, it’s the last thing that will equally enrage everyone. My point is that misogyny shouldn’t get a pass if this stuff doesn’t. Your average racist doesn’t want to bring back the holocaust, just like your average misogynist doesn’t want to fuck women with a knife. But both types of lyrics breed an environment where such things shift the acceptable line away from where it should be.

Cannibal Corpse’s lyrics aren’t worse, but they aren’t better either. The very fact that most people seem to think racism is somehow “worse” than sexism suggests that metalheads should reevaluate how they feel about “silly” lyrics about raping women when compared to lyrics about whipping slaves.

All of this is of course moot since what is really at play is the idea that one should not listen to music made by people who espouse horrible ideas and actions. It’s a tricky question, since one can’t really take a stand without seeming like a hypocrite.

Because, really, “Even though I find their lyrics uncomfortably disturbing as it is, I’d be more disturbed if they were toned down to the point where I actually thought they were trying to sell me on a viewpoint.” …I assume this means you might need to rethink listening to a lot of your favorite rap albums in the future?