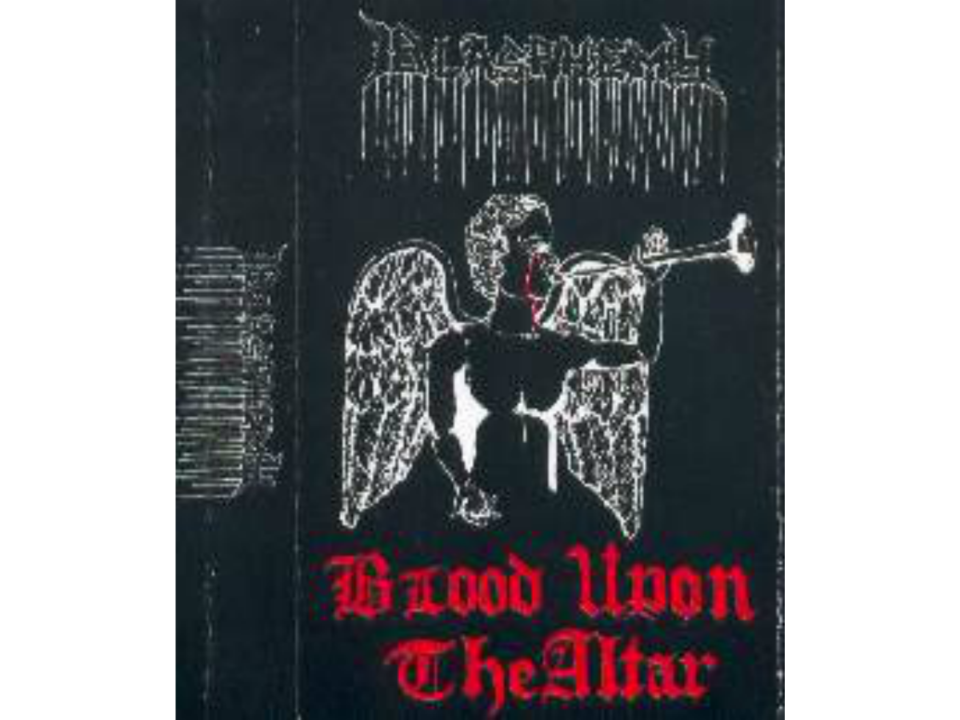 1989 was a pretty brutal year for extreme metal.  Grindcore and death metal had finally used the knowledge culled from a decade of metal malevolence to produce some of the filthiest recordings in the history of music. However, none were quite as filthy, quite as brutal, and quite jaw-droppingly evil as Blasphemy’s debut demo Blood upon the Altar.

Yes, Blasphemy’s follow-up, Fallen Angel of Doom is a metal classic, and to claim you don’t like that album is to be cast out from the halls of metal for all time.  However, as brilliant as that album is, I think I actually prefer Blood upon the Altar.  Partly because it just has a certain primal first album immediacy and charm (think W.A.S.P.’s debut), but mostly because the production is just so much better!  Just check out this immortal riff from the immortal “Demoniac”:

Now listen to the same exact riff from the same song on Fallen Angel of Doom:

You almost can barely even hear the best part of that song in the FAoD version!

Still, I’m not here to debate which album is better, ButA or FAoD, I’m here to bring teh evil, and that is exactly what Blasphemy does on songs like “Weltering in Blood”:

Now, I’ll admit, that that “slow epic simple melody” that Blasphemy loves to riff into the ground between sections of chaos and old school death metal might sound a little familiar over the course of even this short of an album. For example, this clip from “Ritual” might seem a little familiar:

However, anyone can hear that it uses the four notes from “Weltering in Blood” in a totally different order! And this clip from Nocturnal Slayer” uses the same four notes in an even different order (it shows impressive restraint that Blasphemy did not create a 24 song demo):

Ok, ok, obviously I kid, sure, some of the riffs and that classic Blasphemy formula might be a little similar, but while listening to one of the most visceral albums of all time, one hardly has time to nitpick whether or not certain riffs are too similar. And, honestly, there is a great deal of variety in the music on this album. I especially love when they really get the tremolo picking going like this clip from “Blasphemous Attack”:

They might have their roots in death and grind, but supremely evil stuff like that is why Blasphemy has always been a black metal band at heart.

In fact, the best stuff on the album is when they get all sinuous and evil (in a chaotic blasting way, of course) like this clip from “Blasphemy”:

That track even features that classic Blasphemy way of ending a song–by just fucking ending it! So, in that spirit…

I don’t have this one, so I can only really comment on what you’ve posted here. I’m amazed at how much better the production is here than on FAoD. Still, though, this seems like one of those albums that has most of the ingredients to be great, but lacks the songwriting to really put it all together.

Some of the riffs seem pretty good, in particular the one from Demoniac, but as you pointed out, they seem to go to that well a little too often. I guess what I’m trying to say is that this seems like an album where any given snippet could lead you to believe that it could be awesome, but taken as a whole it would be uninspiring and repetitive.

I’d say give it a shot, honestly, the few sections I pointed out were the worst offenders in the repetition front. And hell, the whole demo is only 20 minutes, a bit of repetition in themes is fine for that length of time, if it were like 60 minutes or something I’d be a lot more critical of it. Otherwise, the riffs and songwriting are pretty great…visceral and intense (and I suppose, a little amateurishly chaotic), definitely worth checking out in greater depth (along with Fallen Angel of Doom…despite the production)!