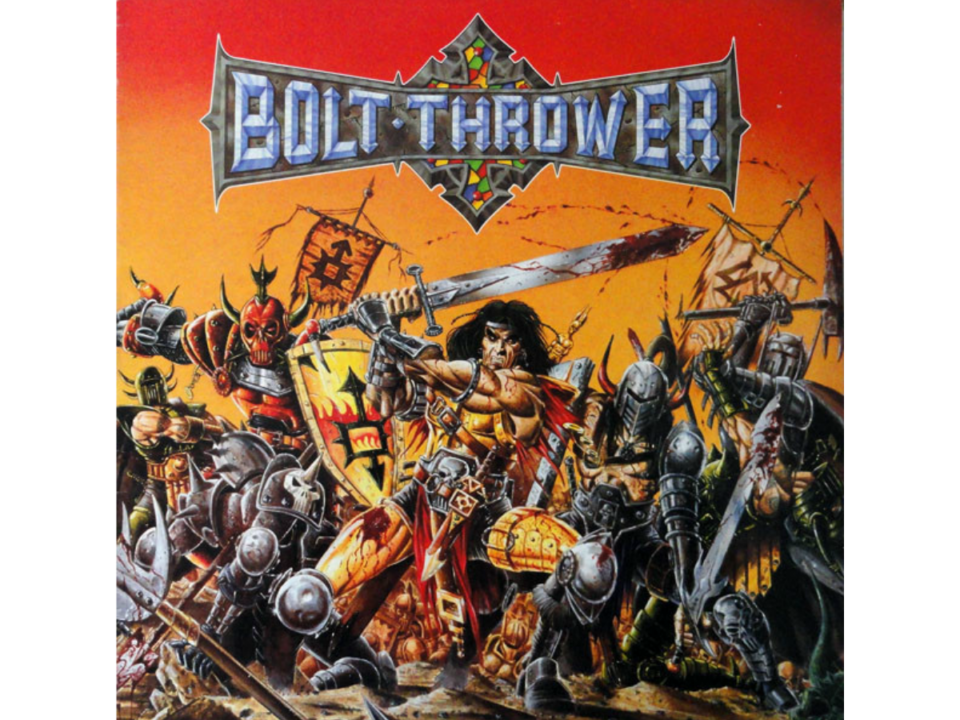 There’s an old joke that says something along the lines of “Vivaldi didn’t write 500 concertos, he wrote one concerto 500 times.”  Well, any death metal fan will immediately understand this joke’s relevance to Bolt Thrower, a totally badass band that has been writing the same song over and over again since 1986.  Luckily, like Vivaldi, that song TOTALLY kicks ass.

I was pretty torn about how to pick today’s album.  1989’s Realm of Chaos is probably Bolt Thrower’s most interesting album.  But it (like their debut, 1988’s In Battle There is no Law) is also partly grindcore, which has never really been my thing.  1992’s The IVth Crusade has a truly thunderous production, and the songs are all great.  Unfortunately, they really do all kind of sound the same (a problem that has always plagued their albums).  1994’s For Victory… and on are all just as good as The IVth Crusade, but in addition to the repitition problem, they also become increasingly creatively inert as Bolt Thrower tried to stretch a musical style that was good for an album at most into a career.

This leaves us with 1991’s Warmaster.  Not quite as varied as the hilariously detuned Realm of Chaos, and not produced as well as The IVth Crusade, it was Bolt Thrower’s first pure death metal album and one for which I’ve always had a soft spot in my blackened heart.

Bolt Thrower are the best there is at what they do…and what they do is play mid to up tempo death metal propelled by a thunderous freight train of a drumming attack.  Drummer Andy Whale was not one of the all time death metal greats, there are plenty of others with faster double bass or more technicality.  But just check out how instrumental he was to the relentless attack that is a typical Bolt Thrower riff from “What Dwells Within”:

As that clip illustrates, when the drums start in on a Bolt Thrower track, your ass is getting kicked.  The guitar parts on Warmaster are all very cool too, and served as nice interludes between the driving double bass sections like in this clip from “Destructive Infinity”:

Karl Willett’s vocals are also pretty great.  Like Morbid Angel’s David Vincent, they are clear enough as to make a game of “Guess the Underground Metal Song Lyrics” far to easy to even be bothered with, and yet they are still quite powerful and gutteral as this clip (backed by a cool artificial harmonic’s riff) from “Rebirth of Humanity” illustrates:

Of course, by now you should be detecting a pattern to these songs which starts with the first track on the album, “Unleashed (Upon Mankind)”:

Squirrely melodic guitar riff (based on whatever harmonic minor scale that they use to write every riff they’ve ever come up with ) followed by thunderous double bass attack.  It’s a good formula, but not exactly one that can sustain interest over multiple albums (or, in the case of their later material, multiple songs).

Still, I said that Warmaster was more varied than most of their output, and for the most part that is true.  The songs jump from slow to fast to midtempo quite effortlessly, and have plenty of cool riffs at all stages like this section from “Afterlife” illustrates:

Not to mention the album highlight of “Cenotaph”:

As for the solos, they are pretty typically atonal and death metalish.  Though there are some nice simpler sections that work well to diversify the relentless chugging onslaught that is a typical Bolt Thrower album like this clip from the final song, “Afterlife”:

And of course the album ends with that awesome Bolt Thrower chugging double bass.

Is it better than The IVth Crusade?  I am honestly not sure…The IVth Crusade has so many totally sweet songs.  But you have a much higher percentage chance of getting all the way through Warmaster without getting completely bored, so I’m giving it the edge today.

I’ve never been completely sold on Bolt Thrower. If you had never heard them before, you could listen to damn near any one of their songs and think, “Damn, this band probably kicks ass.” That’s what I thought when I first heard “Unleashed (Upon Mankind)” back in like ’91 or ’92.

But I don’t know – despite the fact that they can write some really great riffs, I would never consider them great songwriters. Even their songs with great riffs have fucking boring-ass parts. And yes, all their songs sound the same.

Heh, yeah, I remember when I finally heard For Victory… recently I was like “oh man, Bolt Thrower really is the best of all possible death metal bands!” Then, about half way through song two I was like “oh yeah, I forgot about that…”

Heh, heh, oh well, I guess you’ve got your Cannibal Corpse and I’ve got my Bolt Thrower and we’ll both have to live them down.

Have you heard Realm of Chaos though? It sounds kind of shitty in parts, but is actually a bit more varied than a lot of their stuff.

Hey, in my defense, I only really like two, maybe three Cannibal Corpse albums. I’ve yet to listen to their debut, actually, and it seems like something I’d like, so I’ll have to check it out one of these days.

No, I’ve never listened to Realm of Chaos. I’ve heard Warmaster, The IVth Crusade, …For Victory, and Those Once Loyal.

I don’t know if you’ve listened to Those Once Loyal, but it’s pretty good. I think I’ve mentioned this before, but the first track off that album, “At First Light,” is probably my favorite Bolt Thrower song. The opening riff is just super-epic.

Brian- I think you would really enjoy Eaten Back To Life. It has this thrashy edge that they kind of lost as they progressed as a band. “Edible Autopsy” is still one of my more favorite Cannibal Corpse songs to this day.

Isley- I can’t thank you enough for giving this record praise! hehehe.. I’m surprised the cassette I had of this record didn’t die on me long ago. It was in steady rotation along with the other major Earache bands from 90′ to 91′: Napalm Death- Harmony Corruption and Carcass- Necroticism: Discanting The Insalubrious. There is just something special about Warmaster. I don’t think they peaked with it as I do agree that Those Once Loyal found them pushing the envelope for their sound again. Warmaster is just purely epic in it’s pounding rhythm. I’ve always pictured an army of tanks rolling across a battlefield to this album.

Here’s a link for the video they made for “Cenotaph”: http://www.youtube.com/watch?v=oxMJDTJXleI

Heh, glad you enjoyed it, even though my praise was of the backpedaling kind 🙂 But yeah, something about this album always stuck with me. What do you think of this compared to Realm of Chaos Jeromy? You were always more into grind, and those were the elements of Realm that kind of turned me off…still a great album though.