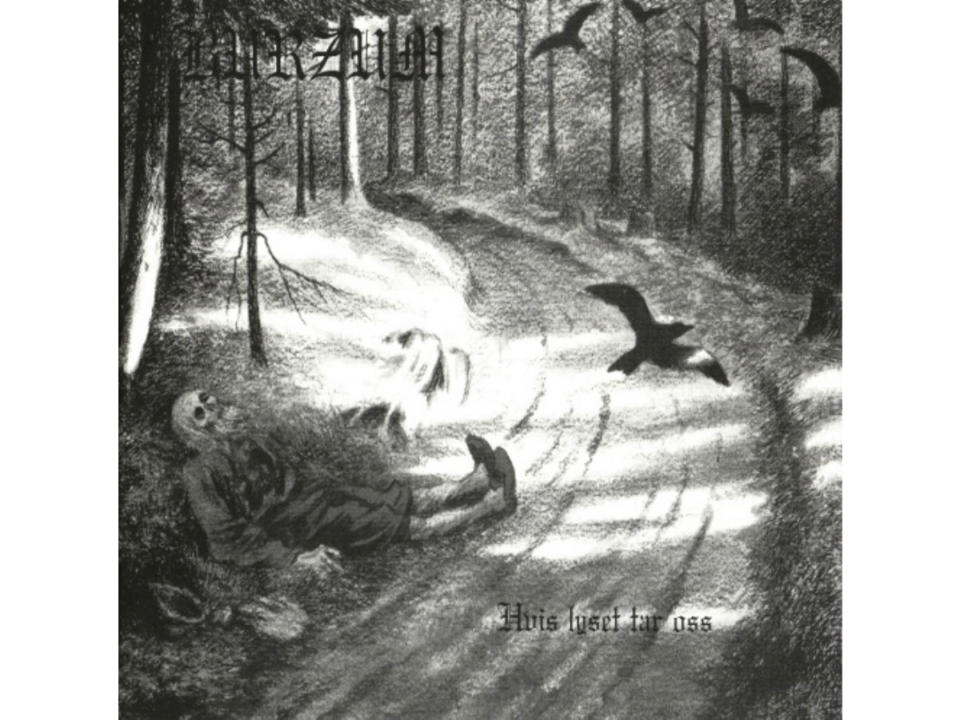 As the years have passed and my taste in black metal has narrowed further and further, one album has consistently remained atop my “all time greatest black metal albums of all time” list.  That album is Burzum’s 1994 masterpiece, Hvis Lyset Tar Oss (If the Light Takes Us).  No matter how brilliant new discoveries like Paysage D’Hiver might be, I still feel like Hvis Lyset Tar Oss represents some kind of pinnacle of creativity that really pushed the boundaries of just what black metal could be.

The album only has 4 songs and yet is almost 45 minutes long.  The 14 minute opening epic, “Det Som Engang Var” (That Which Once Was), is perhaps the quintessential Burzum song, and an excellent example of the brilliance of this album.

The song begins with a long ambient intro, and when the drums and guitars finally kick in it is really a quite breathtaking moment:

The rock and roll style riff soon transitions to something far more epic as the sorrowful keyboards and absolutely shredded vocals take over:

Sole member Varg Vikernes abandons traditional verse chorus structure on this album, instead he adopts a more free form method of songwriting, letting themes come, go and morph organically into each other.

Or, change all together like this clip from the dirge-like five minute outro:

The next song (the title track) at first seems an abrupt change of pace from the epic majesty of the opener as the listener is assaulted by a wall of chaotic noise with hidden discordant complexities buried in the mix:

And then the beauty of the song begins to peek through the mix, like a recording lost in the woods for decades, with only a hint of what it might have sounded like remaining:

The final “black metal” track of the album, “Inn I Slottet Fra Dommen” (To the Castle from a Dream) also starts quite brutally:

However, by the time of the completely epic finale it might just be the most awe inspiring song on an album full of such songs:

Finally, the listener is left with the 14 minute ambient keyboard piece “Tomhet” full of sections like this:

Sure, it might veer dangerously close to new age, but, honestly, I can’t say it doesn’t fit with the atmosphere of the album.  Hvis Lyset Tar Oss is an album full of images of desolate mountaintops, ruined castles and snowswept plains.  It evokes an overwhelming melancholy for that which once was, but is now gone, for all time.  What better way to finish this post, and sum up the brilliant atmosphere of the album than to simply leave you with the translated lyrics to the opening track, “Det Som Engang Var”:

That Which Once Was

Tell the truth. You just like it because the band name is in the Black Speech. 🙂

Haha, oh crap, maybe you are right! Also, at this point the sole member was going by the name “Count Grishnackh”…though I doubt Grishnackh in the book was an actual count.

Or could actually count. 😉

Since when is Burzum not intellectual? Check out the documentary Until the Light Takes Us. Count Grishnackh has all the pseudo-intellectualism of a cult leader.

People can say what they want about black metal – and most of the time they’ll be right – but this album evokes more feeling than 99% of the music I’ve ever heard.

Here’s one from that much-lauded 1%: http://www.youtube.com/watch?v=H25ORRgLxdA&ob=av2n

Stirs the very depths of my soul.

Hehe, goddamnit, I waited through the youtube ads for this??