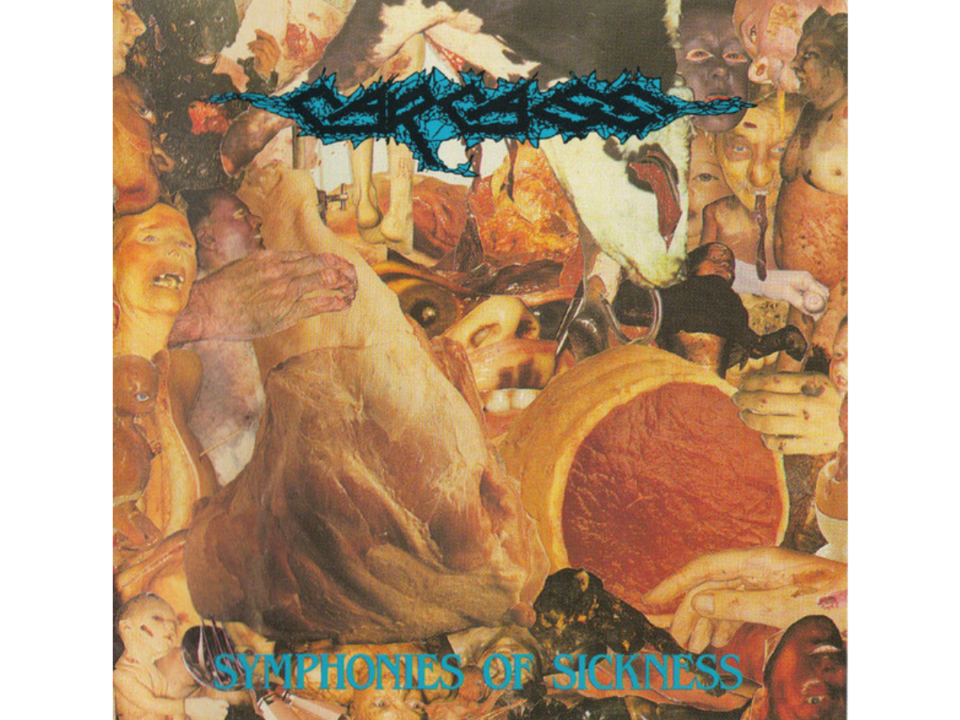 Coming out in 1989, Symphonies of Sickness was a pretty early death metal release, but like 1989’s other masterpiece (Morbid Angel’s Altars of Madness), it has lost none of its power.  The disgusting cover alone has yet to be matched in the collage underground, while the lyrics read like all the grossest parts of a medical school textbook (which supposedly is exactly what they were).  It says a lot that I was able to work most of the song titles from this album into my post about Good Ol’ Jack Dickson and the maggot infested pig carcass from his farm without them seeming out of place.

The sound quality was much improved from their murky first album with the massively heavy detuned guitars sounding great on the slower sections.  In fact, if I have any complaints about the album, it is the blast beat sections which are still not quite clear enough for full enjoyment.  You can hear the problem in this clip from the opening track, “Reek of Putrefaction”:

Not that the blast section kills the song, it is just the one area where the album shows its age since the production was not quite up to the task of capturing such a furious section while keeping the whole thing from degenerating into white noise.

Symphonies of Sickness was also the first Carcass album with actual double bass drums as you can hear from this clip of “Swarming Vulgar Mass of Infected Virulency”:

Double bass was just starting to catch on in 1989, and even though Ken Owen’s work on the album didn’t break any speed records it was still very effectively used.

The vocals ranged from guttural growls to mid ranged barking to high pitched screams.  Some of my favorites are the obviously processed (and severely detuned) sections like this classic example from the “Ruptured in Purulence” opening:

That’s pretty much the vocal equivelent of a crepatating bowel erosion right there.

The guitar work, while not as air tight as the most technical death metal bands of the day, was still pretty competent, and showed some real creativity, like this daring (for death metal) harmonized section from “Exhume to Consume” (which, really is a pretty clever song title) that leads into a solo:

There are actually a lot of nice guitar solos on the album, ranging from “Cadaveric Incubator of Endoparasites'” more standard:

That opening (almost Pantera-esque) syncopated riff is a good example of the kind of variation you can find on the album.  Slow and sludgy, fast and furious and everything in between, for an ex-grindcore band, Carcass really do vary things up as you can hear in this sample from “Empathological Necroticism”:

Those are two very different riffs, even though they are really just variations on the same musical theme from that song.  Impressively, for as much as Symphonies of Sickness manages to mix things up, it is never just a “riff salad”.  Each riff is thoughtfully incorporated into the framework of its song.

I’ll finish up with my personal favorite track from the album, “Embryonic Necropsy and Devourment”.  It starts off with a great melodic (gasp!) riff:

That riff returns throughout  the song (along with, unfortunately, a few “too noisy” sections) as it builds to this climax:

That finale is nothing short of “fucking epic” in my book!

Despite the failings of the production in the blast beat sections, I hope all this has convinced you to take another look at Symphonies of Sickness.  Sure, Necroticism: Descanting the Insalubrious opens with that badass “Corporal Jigsore Quandary” track, but I always tend to get a little bored if I try to listen to Necroticism all the way through.  I never get bored listening to Symphonies of Sickness!

Come on, Unruh, open your ears – that “Reek of Putrefaction” blast section is clear as a bell! In all seriousness, this is a very good album. But I guess it’s because of guys like me that you would consider it underrated, because I really don’t think it’s on the level of Necroticism.

Heh, as I was relistening to the album I kept thinking “actually those blast beat sections aren’t that bad…” but it only took a listen to Cryptopsy doing it right on None So Vile to remind me what it sounds like when you do it right.

I listened to Necroticism a few months ago…and enjoyed it, but I still got a little tired of it by the end…Symphonies is the one I always want to return to for some reason.