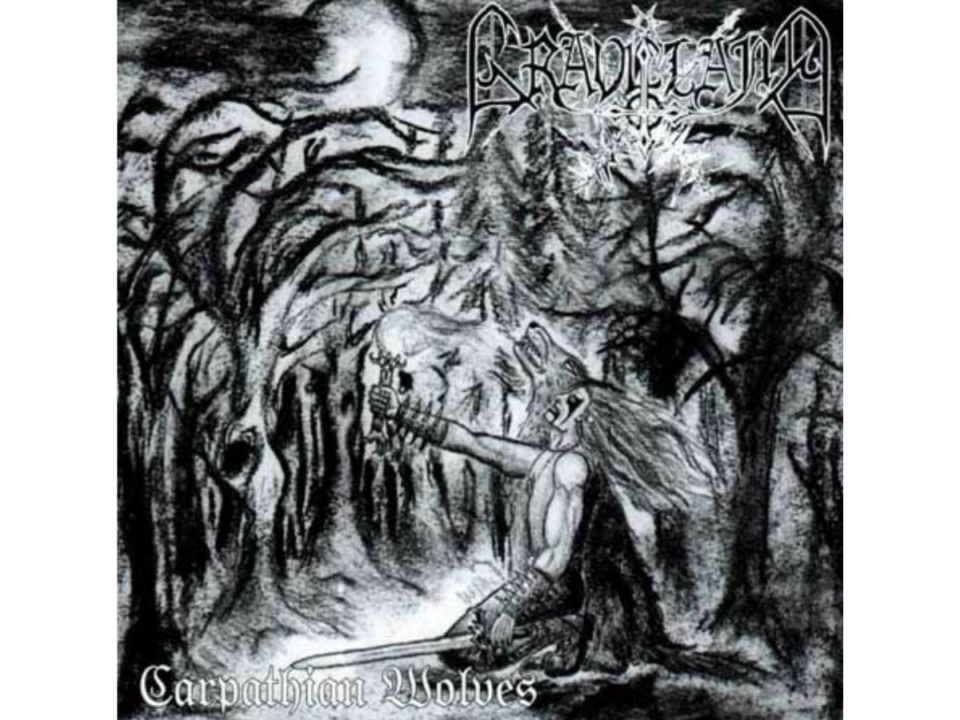 National Socialist Black Metal is a touchy subject, even (especially) among black metal fans.  And while I fall into the camp that an artist’s personal ideological beliefs should have no effect on your enjoyment of their art, I do understand if someone thinks listening to something like Buchenwald Oven’s demo is going a bit far.  Which brings us to today’s band, Graveland, one of the most famous of the Polish black metal scene’s uncommonly common racist bands.  In fact, Graveland’s notoriety grew so great that by the end of the 90s they were even mentioned on an episode of The West Wing!  Black metal fans have often debated the quality of Graveland’s music, many unfairly condemning their entire catalog due to their beliefs, but I’m here today to tell you that Graveland’s first full length, 1994’s Carpathian Wolves, is one of the all time great black metal albums, and, as it turns out, it was also released before any racist rants, lyrics or imagery had kept their way into the the band’s output.

Black metal is all about atmosphere, and Carpathian Wolves has plenty of that.  Graveland frontman Rob Darken crops up so much contributing his synth work to just about every other band in the Polish scene’s albums that I’ve grown tired of his “intros.”  But, Carpathian Wolves really features a lot of great work from him on the intro/outro front.  The opening intro is a great combination of dogs barking with a simple organ line over tribal drumming:

A proper black metal intro should simply nail the atmosphere of the album before the screaming starts, and that is exactly what this intro does.

This intro leads into the first track, “Barbarism Returns,” an excellent example of the Carpathian Wolves formula: guitars that sound like they were recorded in another room play a faster section that leads into one of Graveland’s famous slow and majestic keyboard passages while drummer Capricornus pounds out the most adorably sloppy triplets in black metal:

I mentioned the atmosphere, and Carpathian Wolves positively oozes with it, this really is magnificently evil stuff like this section from “In the Northern Carpathians” (following an equally evil intro full of babies crying) that makes excellent (and subtle) use of the keyboards:

Of course, for the most part, the used of keyboards on this album is anything but subtle as you can hear on this clip from “At the Pagan Samhain Night”:

And yet, as obvious as keyboard lines like that are, I have to admit they really work quite well on this album, black metal is a simple form of music, and simplicity is the only thing that keeps this from that dreaded specter, “symphonic black metal” (shudder…)

Though this is a keyboard heavy album, there are still many keyboardless sections that use the folky guitar melodies to excellent effect. The laid back song “Witches Holocaust” is a great example of this (with bonus clean singing!):

Again, this album isn’t breaking any new ground or wowing you with it’s variety.  It is simply trying and succeeding at creating a really magnificently evil, and, dare I say, “pagan” atmosphere by weaving it’s epic keyboards with some really excellent guitar riffs.  The final track, “Unpunished Herd,” is just one of many examples of this killer formula:

Again, though I am sure Rob Darken was still a racist when he made this album, there is still nothing racist in the packaging or lyrics.  It wasn’t until the follow-up Thousand Swords that he first made oblique references to neo-Nazism.  I will say that Thousand Swords is probably even a better album than Carpathian Wolves, but you’ll have to let your conscience decide whether or not you want to listen to music made by some racist asshole who gets off on taking pictures of himself fighting Yeti, no matter how good it might be.

I’m not exactly sure how to respond to this one. I guess I’ll start by saying that Thousand Swords is much, much better than this album. As for listening to music made by a racist – well, I’m not the thought police. Does my listening to such music lend implicit support to those views? I don’t think that it does. Could I be wrong? Maybe.