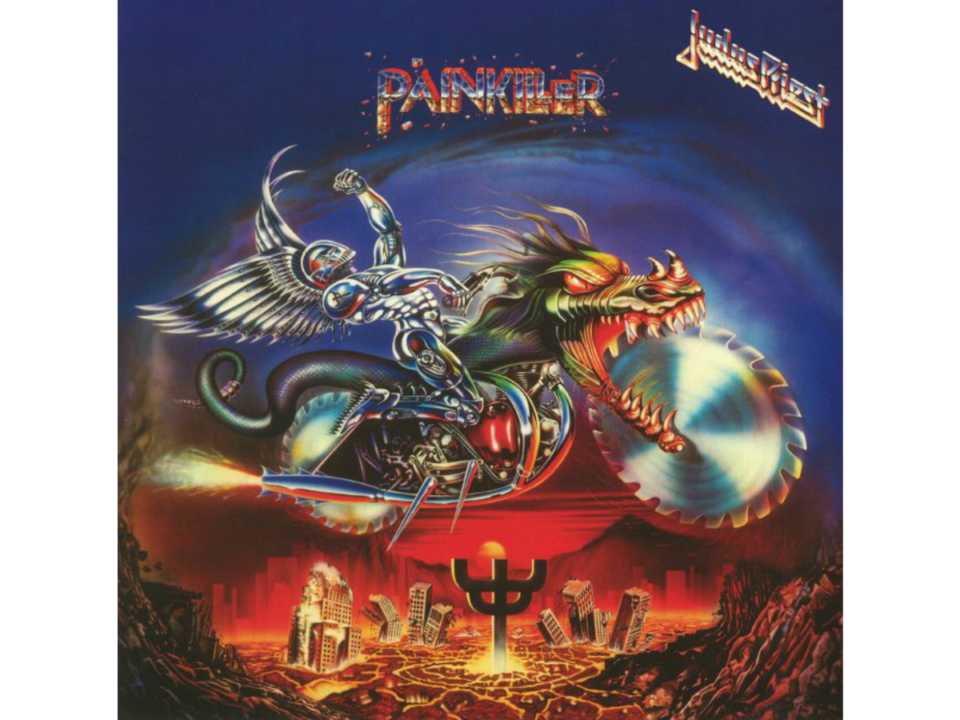 This month I’ll discuss what I’ve taken to calling (with only a small amount of hyperbole) the “most metal album of all time”!

Judas Priest, I’m sad to say, has been woefully under-appreciated by myself for most of my metal life.  I mean, I like Breaking the Law as much as the next guy, but, Priest was never “REAL” metal, especially since it seemed like every other song of theirs sounded like this:

Thus, you can imagine my shock when, only a year ago, long time MMMM commentator Brian was like, “hey check out this Priest song” and I heard the following from their title track, “Painkiller”:

I mean, holy crap, what kind of band puts out an album that face meltingly metal as their TWELFTH album? I really didn’t think Priest had something like that in em!  It’s like a bunch of old NWOBHM dudes were sitting around one day and were like “ok, let’s show all these young pups that have been calling themselves thrash bands in the last decade how it’s really done!

Sure, the lyrics are full of stupid shit about laser bullets and buzzsaw motorcycles (wouldn’t it just buzzsaw itself right into the road?) ridden by, and I quote wikipedia, “a metal messiah sent to the world to destroy evil and rescue mankind from destruction.”  But, honestly, what metal bands DON’T have silly lyrics?  Anyway, if you can accept the cover and its implied lyrical content: 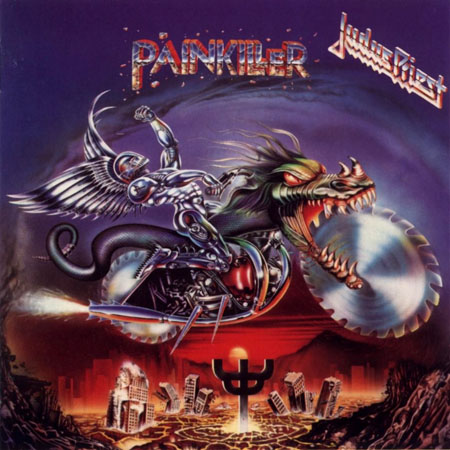 …then 1990’s Painkiller promises the most face smashingly metal 45 minutes of your life.

Part of the album’s charm is just how damn catchy it is.  Just about every song is a metal anthem that will have you singing along in your worst falsetto while banging your head like a metal messiah sent to the world to destroy evil and rescue mankind from destruction!  Just witness the glory of “Hell Patrol”:

Or the totally epic closer “One Shot at Glory”:

And those are just to name a few, again, the entire album is a total metal classic.

For a bunch of old dudes, Judas Priest prove that they are just as spry as the young guys.  The shredding is as ridiculously over the top as you hope it would be:

While new drummer Scott Travis shows from the very beginning that he is a force to be reckoned with behind the kit:

Of course, the real secret to the awesomeness of Judas Priest is, as always, Rob Halford’s vocals.  The man sings like a Dio/Banshee lovechild that isn’t afraid to prolapse his uvula.  His range was so impressive that even the album’s ballad, “Touch of Evil”, is just as successful as the insane screaming of the opener:

So there you have it, 1990’s Painkiller, the album that has ridden a buzzsaw motorcycle over every other of my metal discoveries of the last year.  And yes, that even includes Powerslave!

I’m just not sure how to feel about this post. On one hand, you open by giving me mad props. Yay me! But then you have to go and sign off by mercilessly provoking me with a bunch of crazy talk. I mean, really, just try riding that stupid buzzsaw motorcycle anywhere near a pyramid and you’ll end up drowning in sand, bitch.

Hehehe…I give and I taketh away.

And, please, know why the Sphinx has no nose? One word: Buzzsawcycle.

Though I’ll admit, Powerslave has Painkiller beat on the complexity, thoughtful songwriting creativity and variety fronts. Unfortunately, Painkiller wins on the metal anthem front. And, someone has to say it, on the vocal front as well.

Too bad they had to cater to 45+ yr old women at their concert! Although not Isley “brVtal,” breaking the law and another thing coming are badass!

Yeah, Halford has more range, is more stylistically diverse, and likely has the more powerful voice. But guess what? Bruce Dickinson is way fucking cooler. Also, he’s a fencer. Aaaaaaaand he’s a goddamn pilot. Those may not have anything to do with metal, but they sure as shit up his swag.

danny, all Judas Priest songs blow. Fuck all British metal and fuck you.

best priest record ever. at any speed. gonna go listen to it right now, actually.