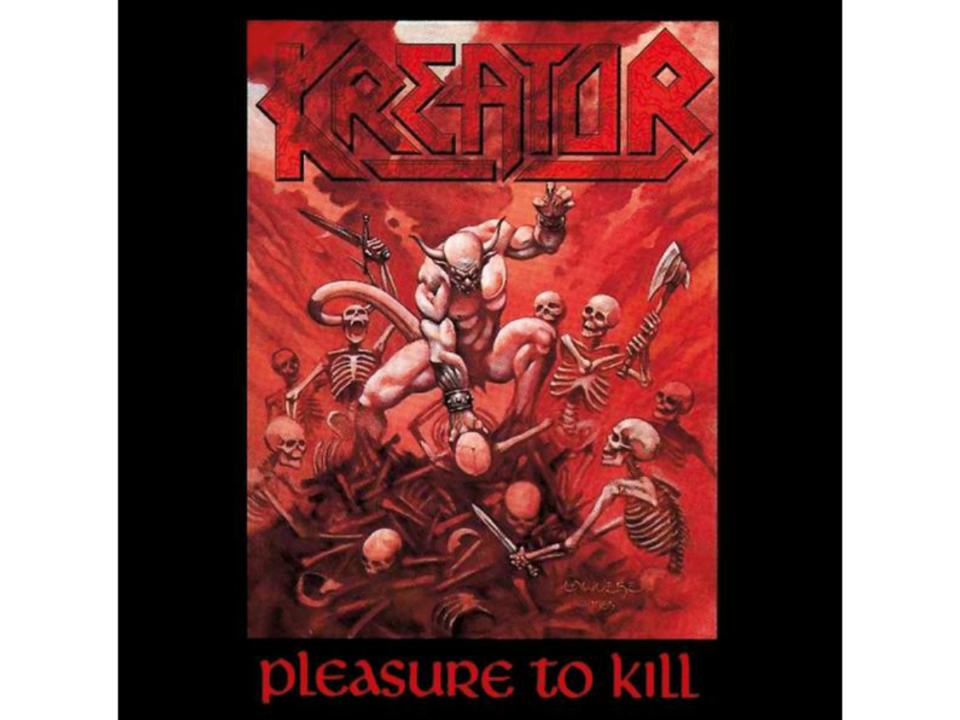 I try to split these MMMM posts evenly between black, death and thrash metal bands.  And, for those keeping track at home, today should obviously be a death metal day.  However, as Chet in Jock Blog and Barbara Stanwyck in Ball of Fire are so fond of saying, “on account of because” tomorrow I’m going to see legendary German thrash band Kreator in concert, and, on account of because I like to pretend I’m not all that into death metal, today we’re gonna do a thrash band.  But don’t worry, Kreator’s 1986 album Pleasure to Kill is so uncommonly brutal that it made the same year’s Reign in Blood sound like Master of Puppets.  Well, not quite, but it came damn close and was undeniably influential to the genre of death metal as a whole, so, in that sense, this totally counts as a death metal month.

Again, considering what thrash in the year 1986 sounded like (with a few notable exceptions), Pleasure to Kill had to have been one hell of a mark-leaving metal cockslap to the unsuspecting listener.  The brief intro gives no clue at all to the ferocity that was to follow with the opening track “Ripping Corpse”:

The guitars sped up to the point of tremolo picking, atonal soloing somewhere between Slayer and Morbid Angel, the furious drumming, the almost black metal vocals, songs like “Ripping Corpse” were what the thrash descriptor “face melting” was designed for.

Seriously, this album gives new meaning to the word fast, as this clip from “Carrion” proves:

Also, the drums on the album really do anticipate death metal, including the use of double bass in this Slayeresque clip from “The Pestilence”:

I also love the way they recorded the toms, that kind of flangey echo chamber sound that Sepultura used to use as seen in this clip from the intro of “The Pestilence”:

Not that they only used the toms for that one descending fill that everyone knows and loves from Morbid Angel’s “Rebel Lands” (and every other metal song ever), they did some cool stuff with them, I especially liked this section from the title track “Pleasure to Kill”:

How about those sick vocals amirite?  Not that vocals are the final say in what genre a band plays, but that was still some evil shit right there.

The song structures also tend to eschew your typical verse/chorus formulations for more nihilistic shouted one phrase (usually the name of the song) choruses that would dive straight back into the main riff before the entire song merged into something new.  Any of the songs make a good example of this, but I especially love the way they sing the name of the final track, “Under the Guillotine”:

There are, of course, glimpses of the more refined (and thrashy) Kreator to come in songs like “Riot of Violence”:

But you know what? Those riffs rule too!

Bottom line, Pleasure to Kill is about as brutal as metal comes no matter what the year.  In addition to being hugely influential to the new genre of death metal, it expanded the limits of what thrash could be and opened the doors (along with countrymen Sodom) to a whole new underground of German thrash that was almost as filthy as their South American counterparts.