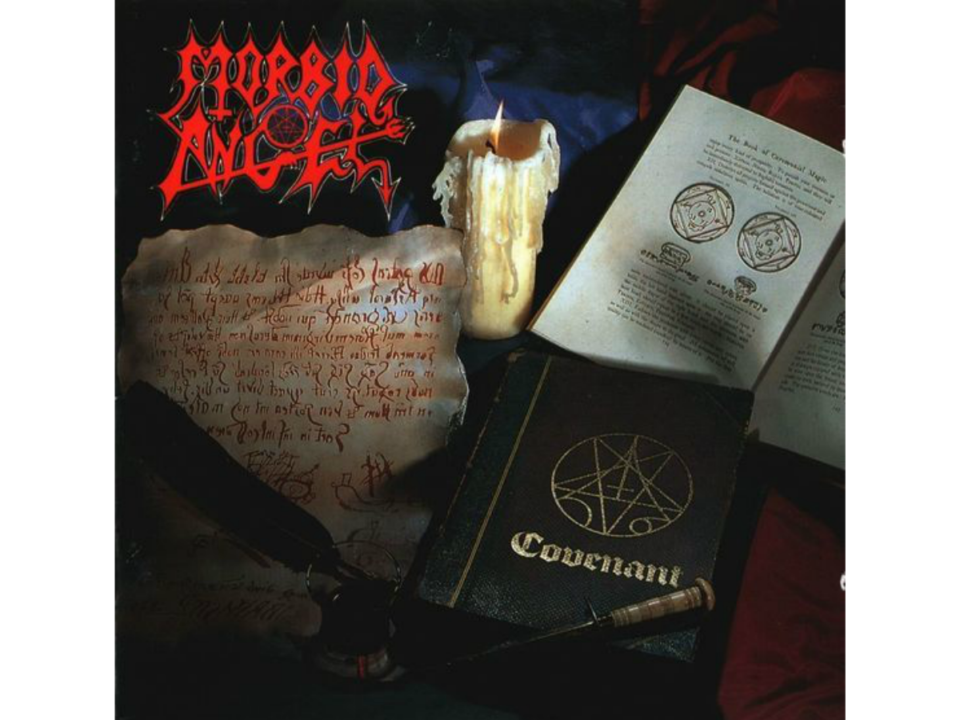 Here we are with yet another new www.isleyunruh.com feature!  This time I will be discussing a different classic Thrash, Death, Black or just plain “Heavy” metal album on the 15th of each month.  Of course, I’m an old school fellow, so don’t expect to see a lot of stuff post-1996 or so.  Each installment will be accompanied by several short sound clips illustrating important sections of the album.  Anyway, it was either this or a new Daily Metal Reviews section.  Consider yourselves lucky I chose the path of moderation.

This month we discuss one of the all time great Death Metal releases: Morbid Angel’s third album, Covenant, released in 1993.

Ask any Death Metal fan worth their salt what the greatest Death Metal band of all time (and “the best show you’ll ever see”) is and they will tell you Morbid Angel.  Trying to determine what Morbid Angel’s greatest album is is a tougher question.  For a long time I wavered between the raw hate of Altars of Madness and the laid back blasphemy of Blessed are the Sick, but I have finally decided to quit selling their third album short.  Covenant might not be their clear best, but it’s definitely one of their best.

The most immediately apparent example of Covenant’s excellence is the production.  Flemming Rasmussen of Master of Puppets fame came in and created a production that was neither muddy like Altars of Madness, nor thin like Blessed are the Sick.  As you can tell from this, the intro to the album, the production was nothing less than thunderous (the following clip should be listened to at high volume for maximum effect:

Only Bolt Thrower can approach the freight train intensity that Pete “Commando”/”The Man With 8 Arms” Sandoval’s drumming lends to this album  (as is evidenced by the scrotum smashing impact of the drums kicking in in the previous clip).  Every Death Metal drummer can do a mean double bass, but damn if it wasn’t utilized to its fullest potential in Covenant.  Just check out this section from The Lion’s Den (one of my personal favorites…a simple but awesome song):

Badass lyrics like “Whips crack” and “Christians standing breathless” break my general rule of “I could give a shit about lyrics.  On Covenant the blasphemy is perfectly pitched between intelligent radical atheism and over the top Satan worship.  There are no song titles like “Bleed for the Devil” on this album, but the mixture of Cthulu mythos, Satanic Imagery, Anti-Christian sentiment, and dark rituals manages to walk that thin line between clever and stupid much more adeptly than most Death Metal lyrics:

Ok, still kind of silly…but also BRUTAL! Death metal lyrics don’t have to be great poetry anyway since you can usually only make out every other word.

Of course, what would the lyrics be without David Vincent to deliver them.  I can understand people who roll their eyes at the Death Metal “monster voice”, because really: is it necessary for Cookie Monster to provide vocals for every Death Metal song ever?  Still, if there was some kind of awards ceremony for best Death Metal vocals, David Vincent (along with that guy from Immolation) would be a front runner.  Check out the guttural power as he spits out the lyrics to World of Shit (The Promised Land)

World of Shit is a great example of the variation that can be found on Covenant.  Altars of Madness can at times seem a bit one note (Blessed are the Sick definitely doesn’t have that problem), but Covenant follows furious songs like Pain Divine with churning (at times almost “Prog-ish”) mid tempo pieces like World of Shit.

I could talk on end about the incredibly intricate (but never masturbatory) riffing of any Morbid Angel album, but it is enough to say that guitarist Trey Azagthoth is one bad motherfucker.  Just check out a selection of his soloing from the old school Angel of Disease:

Or that badass tapped solo/riff from Sworn to the Black:

I saw him play that live and I swear he used all ten fingers to tap it.

And then there is the final track, God of Emptiness.  Dabbling in genres of Prog, Doom, Sludge, and plain old Death Metal it (along with the lead-in ambient keyboard piece Nar Matarru) is an impressive departure from the rest of the album.  I mean, who hasn’t sung along with these operatic vocals:

I’ll go ahead and stop there.  There are tons of great Death Metal albums out there, and I can’t think of a better starting place than Covenant if you want to check the genre out.  Why did I resist adding it to my list of favorite Morbid Angel albums for so long?  Because it’s so damn good that everyone likes it (according to wikipedia it is the best-selling death metal album in the United States of all time with sales over 127,000), and if you know me at all…I can’t have that!

One final note.  If you still aren’t convinced how frikin badass and/or sweet Covenant is, just check out this clip from a family vacation back in 2004 when we happened to be listening to it as we drove by a table of missionaries in Colorado.  Many a missionary knew what it was to be roasted in the depths of a Cthulu demon that day I tell you!:

Also, I suppose it is only fair to point out that my mom was mortified by the rest of the family’s behavior during this clip.

You could say Christians were truely standing breathless haha

I’m not sure if this feature will have the kids going as wild as Middle Earth Mondays, but I’ll sure be looking forward to it every month.

You bring up a lot of good points about this album. I, too, undervalued Covenant for a long time but, at the very least, it’s their heaviest work. I don’t know that it’s necessarily more aggressive than Altars of Madness, but the production sure makes it feel that way.

One thing I always liked about David Vincent was that, over the course of their first three albums, he showed a lot more variation in his style than any other death metal vocalist I can think of. And that opening line to “World of Shit”? Just bad ass.

All in all a more than worthy inaugural entry. This album is full of great tunes. I don’t even know if I can pick a favorite, but the mid-album trio of “Vengeance Is Mine,” “The Lion’s Den,” and “Blood on My Hands” is unimpeachable. Keep the brutality coming \m/

Yeah I don’t know why I always gravitate towards The Lion’s Den…Rapture is also great. I can still remember our conversation that led me to Morbid Angel…what was it, like Sophomore/Junior year of High School?

Me – So I hear you listen to this death metal stuff…who should I check out?
You – Morbid Angel.

I especially like how Vincent’s vocals are very deep and complex in their tone…like those monks that do the deep chanting or something. Yet he’s still clear enough to make out a “whips crack” in there every now and then too.

Hah, yeah, I’m sure they were terrified 😉

I saw Morbid Angel back in 1992 with Cannibal Corpse, Obituary (I think?) and Agnostic Front for $5. Talk about a mismatched bill! The skinheads were out in force that night and I expected a lot more violence than actually occurred, or more than I noticed anyways. I did see quite a bit of blood at this show, mostly mouth injuries, but most of this probably happened in the pit.
I can vaguely remember how Morbid Angel sounded, so it’ll be interesting to listen to these clips later tonight, although “Covenant” was released a year after I saw them. None of the bands were terrible that night, but most of the crowd seemed to get the most pumped up during Cannibal Corpse and Agnostic Front. I’m pretty sure that during most of Obituary and Morbid Angel’s sets I was outside toking up and skateboarding, so I guess I don’t have anything very interesting to say about them other than that I saw part of their set once. Looking back, I only went for one band but the whole show was a pretty fun night, and as I think about it I can almost smell the venue. The pit during Cannibal Corpse and especially Agnostic Front was the most brutal I’ve ever been in.
I’m definitely looking forward to your focus on Thrash, as that was the first music I “discovered” on my own after getting bored with my sisters’ KISS, ACDC, and Van Halen records.

Hah, wow, that is quite a bill I wonder what AF was doing there. I’ve seen Cannibal Corpse a few times and always thought they were boring as shit, but people seem to like them.

I won’t spoil the Thrash surprise, but it will be an album that I think needs more respect than it gets…

Oh, and Domination has also been growing on me a lot. Formulas is ok, but everything from there on just doesn’t sound as special to me.

Also I just saw this: http://www.roadrunnerrecords.com/blabbermouth.Net/news.aspx?mode=Article&newsitemID=130617

Agnostic Front was actually the headliner of that show/tour believe it or not. Of course at the time me and my friends thought they had totally “sold out” by playing with metal bands. I’ve always thought AF were pretty second-rate, but it was one of the first “big” shows I went to and looking back it was alot of fun.
I’ve never had more than a passing interest in death metal, so I can’t comment much on Cannibal Corpse, although I did go see them a few years later (with Brutal Truth who were ok, they had the guy from SOD) for $15. They had a different singer and people were saying how bad he sucked, although to me they sounded exactly the same as they did 3 years earlier.
Bring on the Thrash (except Megadeth)!

Dude…Megadeth’s Peace Sells is a classic!

I gave Domination another shot about 4 or 5 years ago, and I doubt I’ll ever listen to it again. It sounds like a pop record dressed up in death metal clothing. I know I liked both Domination and FFF when I was younger, but I think that was more rabid Morbid Angel fanboyism than anything else.

Dude…Megadeth’s Killing Is My Business, Peace Sells, and Rust in Peace are classics!

I was disappointed a few months ago when I first saw “Nevermore” posted on YouTube. David Vincent is still doing the Domination-era vocals which were my least favorite of his styles, and Trey still seems to be rehashing the same shit ideas he had in the latter half of the 90s (lots of single-note tremolo picking of boring melodies). It just does nothing for me. How do you feel about it?

Yeah, Nevermore is disappointing. I think they are just out of ideas and have been for a while. I tried to relisten to Gateways a while ago and it was a chore.

What I’ve come to appreciate about Domination is that it is at least more than random riffing like most of their stuff from Fomulas on. It was a big change of pace, and sure some of it is rather simplistic (at least in Morbid Angel terms)but there are at least ideas in that album even if it can’t stand up to the first three.

You’re absolutely right about that. I think it’s telling, though, that Erik Rutan either wrote or co-wrote three of the album’s best four songs. Not that Rutan is something special, but it really highlights how Trey had run out of ideas at this point. But like you said, even Trey’s stuff hadn’t devolved into random riffing yet.

Hehe, and one song from So Far So Good 😉