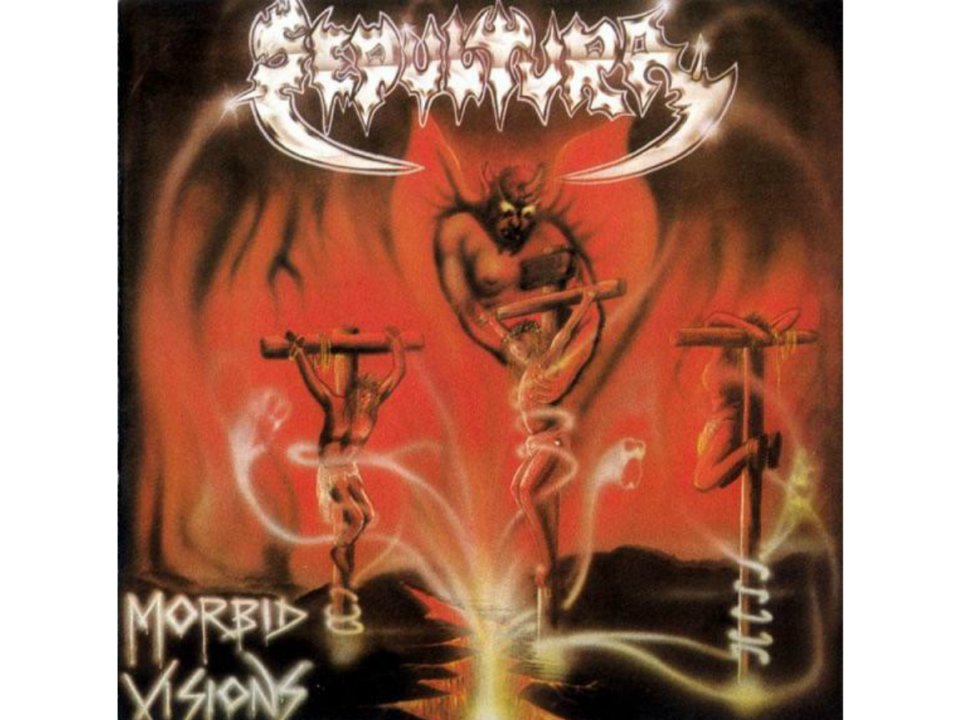 I’ve always been on the fence when it comes to Sepultura.  Sure, I own 4 of their albums (6 before I sold off Chaos A.D. and Roots), and they have plenty of great riffs, and scattered moments of excellent atmosphere, but at the end of the day it’s tough for me to get through an entire album without getting a little bored.  It’s tough to put my finger on it, the music isn’t so much repetitive as it is a bit soulless or something.  I once read an interview where they said they just had a big grab bag of like 50 riffs they had come up with and they just kind of pieced their songs together from those riffs–a songwriting process that seems to back up my suspicion that their music doesn’t have much heart.  However, all those complaints aside, they do have one album that stands out from the rest.  I’m speaking, of course, of their dirty as the devil’s ball sack 1986 debut, Morbid Visions.

Morbid Visions (and, their only slightly lesser 1985 ep Bestial Devastation) is an astonishingly wild and chaotic slab of early extreme metal. At its core I suppose I would at first say this is closest to death metal twinged thrash, but the decidedly evil and chaotic slant seen in this clip from “Empire of the Damned” make me realize this is, more than anything, first wave black metal:

Those are just thrash riffs at their heart, but the production and general atmosphere sure don’t make them sound like thrash riffs.

There is also plenty of straight up tremolo picking to be found on Morbid Visions, right off the back, the title track is chock full of it:

Sure, it’s only two notes before descending into the usual chaotic mess, but they really nail the blackened atmosphere in a way that makes them earn the bullet belts  they wear in the band photo (that quickly disappear by their next album).

When most people discuss this album, the song “Troops of Doom” is usually mentioned as “the only decent song.” And sure, it’s a classic, and, back when I was like “most people,” a song that I liked enough that it was one of the first songs I learned on my guitar:

But the album is more than “Troops of Doom.” While there are plenty of sections that have interesting melodic phrases, or even crude counter point like this clip from “Crucifixion”:

Where the album really stands out is in the unabashed way it embraces the pure evil chaos of a group of young metal musicians who just wanted to play something that was more evil than just about everything else that was out at the time.  Just check out this clip from “Funeral Rites” :