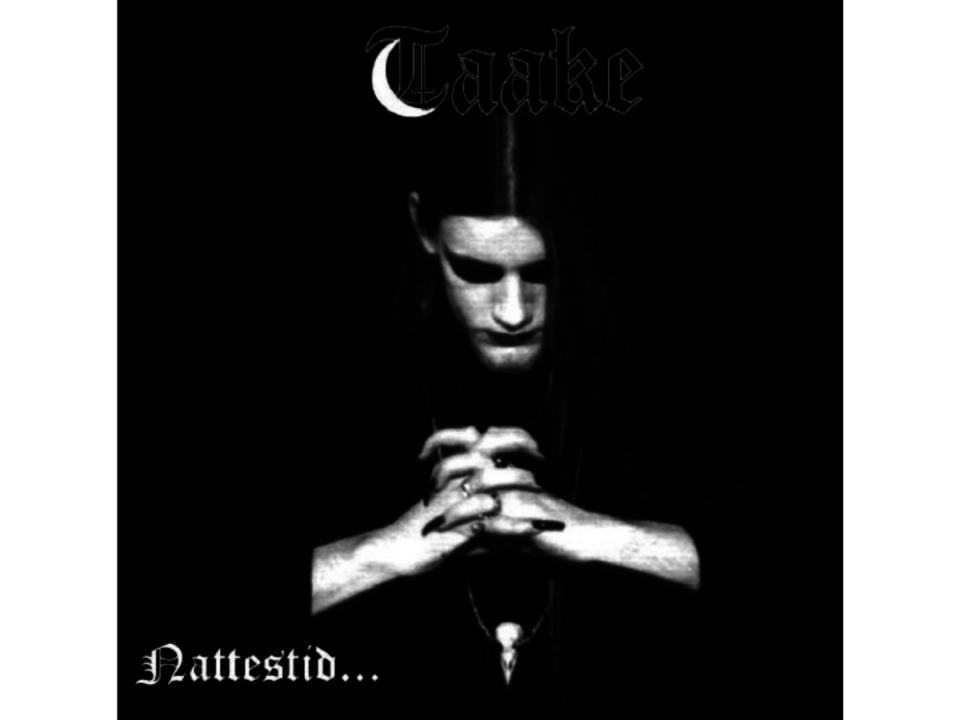 This month I’ll take a look at an example of classic black metal that was alive and well in 1999.

Though Taake did not release today’s album, Nattestid ser Porten Vid (their first full length), until December of 1999, they were active as far back as 1993 under the name of Thule.  Taake is, for all intents and purposes a one man band headed by the controversial Hoest (though, he did bring in the session bassist and drummer “Tundra” for today’s album).  Though Taake is probably best known for the infamous picture of Hoest rocking out with his cock out (NSFW…if you consider cocks NSFW) their debut album is actually some kind of minor black metal classic.

The title roughly translates as “night sees the wide gate,” the songs have no titles and are merely numbered I-VII and the liner notes are written entirely in runes!  The first song tells you everything you need to know about the album.  The amazing tremolo picked opening riff, the “norsecore” hiss of white noise anytime the guitar is playing and the high pitched shrieking vocals…this is black metal the way black metal is meant to be played:

Hoest even includes the requisite “clean vocals” in sections:

Along with some nice acoustic breakdowns that merge into more epic black metal sections:

I’m a little unsure about how well the more traditional “metal” sections fit within such an epic and sorrowful album:

But they always quickly merge into more thoughtful melodic sections:

All of this has of course been done many times over from 1992 on.  Taake however stands out with the strength of their songwriting.  The riffs never just fill space between the scattered good ideas (well, admittedly a few of the tracks might be a bit weaker than the others) they merge together into an actual song rather than a collection of Norway’s most generic black metal riffs.

Most importantly of all, Taake nails the atmosphere.  Sure the guitars are buried almost to obscurity behind the fuzz of the production, but this album is one of the few that actually captures the true Form of epic melancholic frostbitten sorrow­™ where so many other bands have only captured the flickering shadow of epic melancholic frostbitten sorrow™ upon a cave wall.

Nowhere is this more apparent than the brilliant closing track (that Amon Amarth ripped off with Hermod’s Ride to Hell far less effectively):

You might think that black metal shouldn’t sound as pretty as that.  But sometimes it does.  Us black metal fans just prefer to call it “epic.”

Yeah, this is a really great album; Høst is definitely among the genre’s best songwriters. Still, his stuff never seemed evil enough to really feel all that black metally. Epic, though? Hell yes.