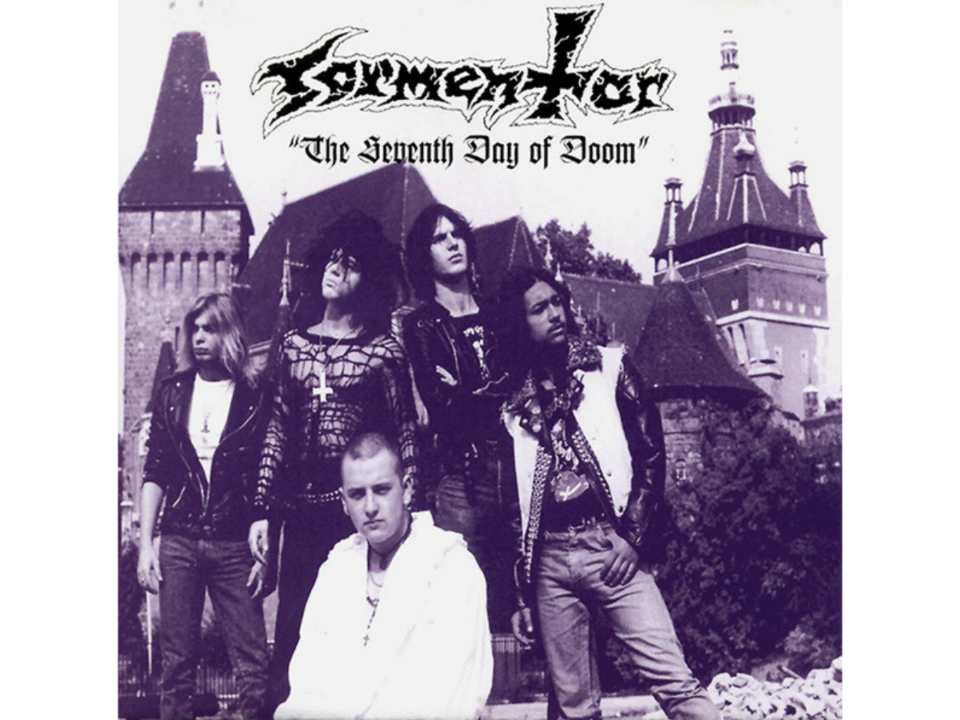 Hungarian band Tormentor is widely (and justly) recognized as a major influence on the second wave black metal bands. Partly due to their vocalist Attila Csihar’s brilliant performance on Mayhem’s classic De Mysteriis dom Sathanas, and partly because their second album/demo, 1988’s Anno Domini, was years ahead of its time in black metal terms. However, today I’d like to take some time to discuss their first demo, 1987’s Seventh Day of Doom.  The black metal elements are there (especially in the vocals), but at its heart, Seventh Day of Doom is really just an excellent slab of dirty as hell thrashy speed metal.

Don’t let Seventh Day of Doom’s demo status fool you, this is quite a fully fleshed out album.  Songs are full of brilliant speed metal riffing that, once heard, are never forgotten–like this clip from the opener “Tormentor”:

There are some serious thrash attacks to be found as well, from the blistering “Mephisto”:

Still, at its heart, Seventh Day of Doom is a speed metal album in the vein of Slayer’s Show no Mercy.  Lots of adorably sloppy tapped sections abound like this clip from “Tormentor”:

Or this particularly catchy section from “Damned Grave”:

Tormentor could also go slow and evil like this particularly foul section from “Live in Damnation” that oozes with just as much satanic energy as Celtic Frost at their sludgiest:

I’ve always been a fan of Attila, and his vocals don’t disappoint on this album.  He was never afraid to push the boundaries of silliness in the name of creativity, and his performance here really is a lot of fun.  I especially like the delivery of the chorus of “Branded with Satan”:

Also the hilariously over the top clean screams on “Infinite Darkness”:

Sure, some of the songs might go on a little long, but all things being equal, Seventh Day of Doom is a really brilliant album that deserves just as must respect as Tormentor’s sophomore effort.  It’s an album full of awesome catchy riffs, just check out this final clip from “Branded with Satan” for a few more:

I always thought Anno Domini was pretty good, but the muffled production always kept me from giving this one much of a listen. Hearing your clips, though, it seems I’ve made a mistake.

Full disclosure, this is the remastered version of Seventh Day of Doom which does an impressive job of cleaning up that muddy demo that had been floating around for a while.