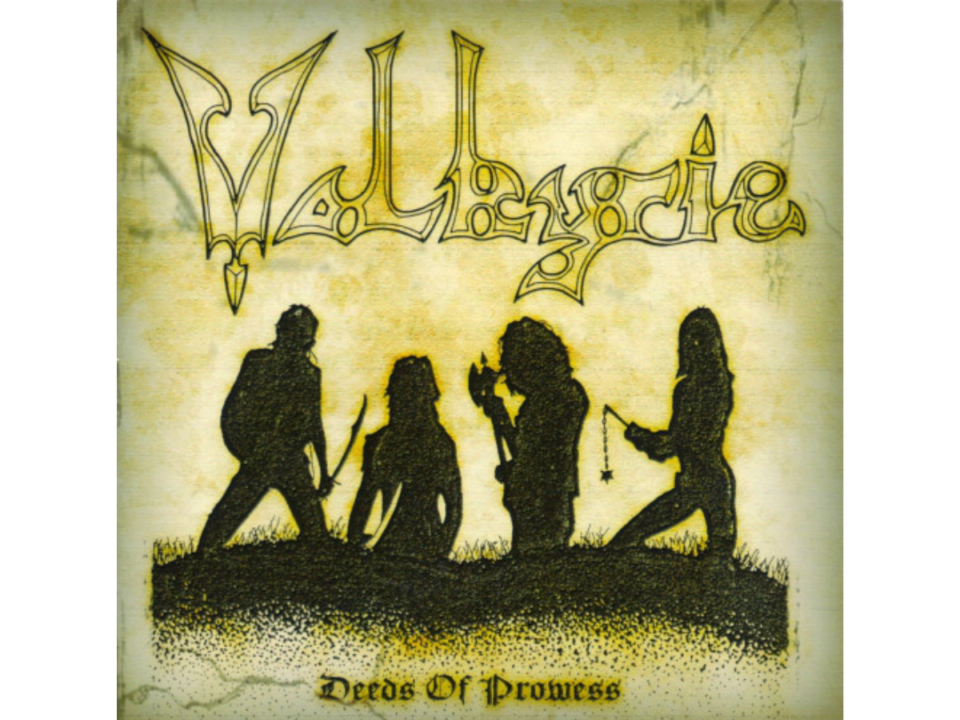 The older I get, the more my tastes in metal have relaxed.  Back in the day (late 90s) I would have scoffed at even a hint of clean singing in my metal.  An album like the Dutch band Valkyrie’s 1986 masterpiece Deeds of Prowess might not have made me run screaming from the room, but 17 year old Isley definitely would have thought it was at least somewhat “weak sauce.”  Cut to 15 years later and I can finally listen to traditional “heavy” metal and realize it for the genius it is. What makes today’s album even more special is the fact that Valkyrie was never signed and this album was their only demo.  Talk about hitting it out of the park on the first swing!

Valkyrie played a kind of extra epic version of traditional heavy metal.  Actually, what they play is a Manowar style of metal, which may or may not be a good thing depending on how you feel about Manowar.  It’s well known what a big Hail to England fan I am, so, in my book this is a good thing.  Not that Valkyrie can be written off as simple Manowar worship, their songs are quite original and creative.  Astonishingly, some no name band from the Netherlands managed to beat the mighty Manowar at their own game–and with a demo no less!  Of course as a black metal fan, I often prefer demos to more “mature” work from the same bands.  There is just a certain unreplicatable raw charm to a quality demo, especially a demo of such unparalleled excellence as Deeds of Prowess.

Check out the opener, “The Ride of the Valkyries”:

The muted, bass heavy production can’t hide the really interesting kind of laid back style songwriting that gallops (really, just listen to those drums) straight into a chorus that is the equal of anything Manowar ever did.

Also like Manowar, Valkyrie’s bass player Remco Helbers really liked to hear himself in the mix, especially on the second track, “The Master of Death”:

However, unlike Manowar, when Remco takes a bass solo it’s kind of awesome rather than kind of masturbatory and silly–as you can hear in this clip from the same song:

Sure, he’s no technical god, but I think that clip is a thousand times more charming and tasteful than “Black Arrows” (not that either of those words have ever been used to describe “Black Arrows”).

There’s a lot of tempo variation on Deeds of Prowess, including the slow and doomy epic “Ancient Steel” in the middle of the album:

Slow and doomy isn’t really my thing, but “Ancient Steel” is actually pretty badass when it comes right down to it.

The next track, The Battlefield of Pelennor is even more badass, with a totally sweet intro:

If you thought that basswork on “The Master of Death” was charming, it has nothing on the vocals/bass in that intro.  Or maybe I’m just biased because of the subject matter…after all, “Ride horsemen ride” was my favorite part of that battle in the book:

This brings us to the final track, the excellent “The Gods are Angered”:

Catchy riffs, epic vocals, it’s the whole Valkyrie package.  Tons of bands have tried to be Manowar over the years, but few have so successfully taken their sound and made it their own.  Yes, Valkyrie never made it past the footnote stage in metal history, but today’s album is proof that metal footnotes can be just as important, brilliant and all around enjoyable as the chapters themselves.