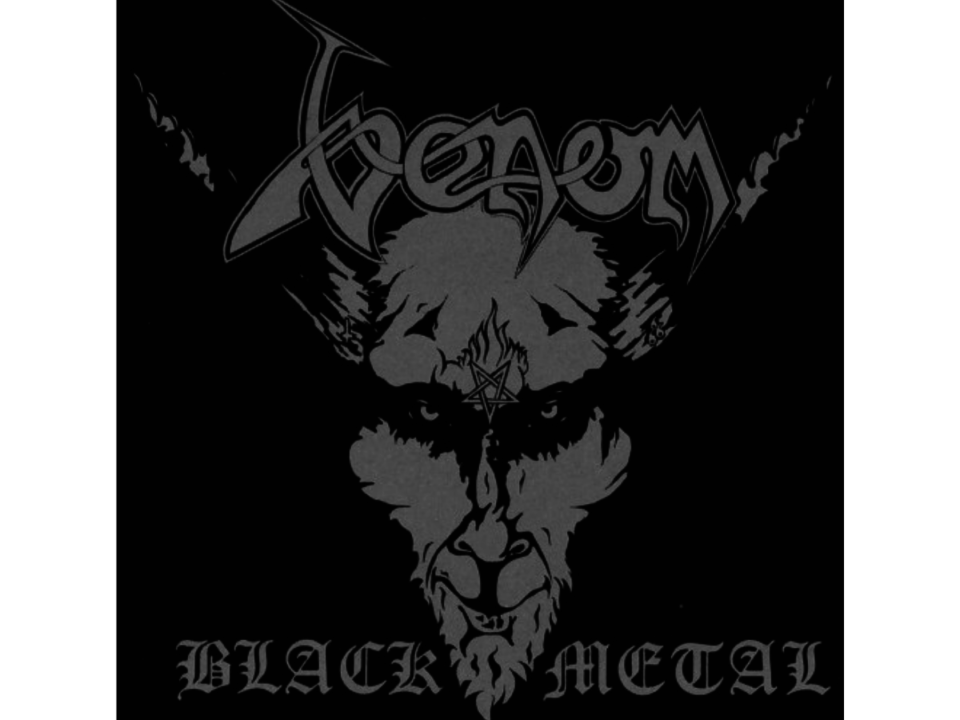 Now I’m sure a lot of people would object to me saying Venom isn’t black metal.  After all, the album we’re looking at today named the genre and they are always referred to in hushed tones (along with Mercyful Fate and Bathory) as the “ancient ones” of the “first wave” of black metal.  And while I still don’t think that they are really black metal, I will admit that writing this post may have changed my mind a bit on the issue.

But we’ll get to that in a bit, for now let’s go to the clips.  For 1982, this, the opening title track, was about as extreme as things got:

The shite production, simplistic songwriting, drummer that can barely keep up and the ridiculous lyrics like “lay down your soul to the gods rock n roll” don’t change the fact that 30 years later “Black Metal” is still pretty frickin sweet.  While everyone jokes about Venom’s limited musical abilities they had the ability to take a few chords and turn them in a headbanging good time that was surprisingly catchy.

Of course, if all they were was “catchy” I wouldn’t be covering them here.  One of the things that really made Venom stick out from their contemporaries was how evil they sounded.  Just listen to this opening riff from “To Hell and Back”:

That is one insidiously squirrelly guitar riff, something that was pretty rare, even in the other more extreme sounding metal bands of the early 80s.

There is a fair amount of variation on the album, at least for Venom.  For instance, the two part epic of “Buried Alive”/”Raise the Dead” starts in a Soundgarden sounding ballad mode:

before exploding into the fast and furious (though a titch too upbeat) second half:

Adorable lyrics like “Ashes to ashes, dust to dust, if God can’t help me, then the Devil must!” really are a big part of Venom’s appeal.  It seems like every month I say something about how meaningless lyrics are and then turn around to talk about all my favorite lyrics.  Venom, by infusing their music with a previously unheard of level of Satanic and occult worship really stumbled on something important.  Metal is an angry, dark sounding music, and even ridiculously over the top lyrics seem to fit it quite well.

I’ve always gone by the rule that Venom’s best sounding songs were the ones that had the most Satanic and evil sounding song titles, which of course meant that “Teacher’s Pet” was my least favorite song on Black Metal.  But, aside from that unfortunate intro and a straight blues middle segment, it’s actually a fairly dark sounding song:

Thus I am led to the unfortunate conclusion that had the lyrics been “Satan’s net…Satan’s threat!” instead of “Teacher’s pet…teacher ‘s wet!” I might have liked the song a lot better!  It’s at least something to think about as it is a darker song than the previous Raise the Dead…which I have always liked.

Regardless of the lyrical impact, the catchy songs keep on coming, including the Nirvana-sounding anthem “Countess Bathory”:

Any song that makes you simultaneously want to sing along and bang your head is alright in my book.

“Don’t Burn the Witch”, the final track (not counting the preview of the next album’s “At War With Satan”…which was much more compelling than the 20+ minute mess that the actually song turned out to be) is (along with the opener) one of my favorites.  A cool intro:

leads into the main song with its incredibly catchy chorus:

If you want to see just how “influential” Venom was to extreme metal, check out the main riff to Bathory’s “Born for Burning” three years later:

I know calculus was invented independently, so these things happen, but I find it hard to believe that Bathory’s Quorthon had never heard the Venom song before he wrote his own witch-burning hymn.

Revisiting Black Metal I was reminded of a few things:

So, the music was very dark sounding, and lyrically it was very similar to the “second wave” of Norwegian Black Metal in the early 90s…maybe that is all it takes for an album to be “black metal”?  Nah, it still doesn’t have tremelo picked guitars and Donald Duck vocals…but from now on I’ll be willing to admit that for a “Heavy Metal” band they were at least pretty close!

I’m just not that much of a fan of NWOBHM which, despite their image and lyrical themes, is what Venom is. “Don’t Burn the Witch” is pretty sweet though, I have to admit. I’ve been listening to a ton of so-called first wave black metal since we commented on Sodom over at your sister’s place – I’ll send you my findings in the next day or two.

This is the first MMMM article where I actually read and heard in its entirety. I always wondered what it was about the fussy guitars, frenetic drumming and almost comical lyrics about Satan and dying that corresponded to “evil”? I like to imagine Lindir’s singing as being Metal. Why? Because Middle Earth just becomes a lot more awesome.

Wait, someone other than Brian and my brother listens to those clips…?

And I think the key here is what I mean by “evil”. I’m basically using a 13 year old boy’s definition of “badass”, so I’m talking about tanks and swords and pee filled balloons and shit…pretty much anything awesome, including dudes that live in a lake of fire and have forehead horns.

The funny thing is, those “evil” lyrics can get pretty silly and yet still kind of seem awesome, while if you sing about kittens and shit it kind of kills your song. I guess it’s because we’re all “in on it”.

Also, there is a black metal band (actually a lot of black metal bands) that only sings about Tolkien…here is one of their songs that the cd cover proudly proclaimed was the “first every song sung entirely in the black language of the orcs”:

All these transitional bands would kind of go back and forth for me. Even Judas Priest had some pretty sweet stuff, and then some of their songs would just be too cheesy.

But yeah, let me know about the old school stuff!

not what I had always thought:

I think my version makes more sense…theirs leaves too much doubt as to the antecedent of “his”… Is the universe God’s slave? God who was just established to be Satan’s slave…I didn’t think slaves could have slaves…

I think it’s maybe a bit to easy in this seemingly post-everything world to scoff at the lyrical content and imagery of metal music. For one thing, there are plenty of ideologies couched in the Puritan tradition that, even still, view Satan as the root of all evil and a very real threat to the soul. Even if one doesn’t subscribe to such ideologies, there was nevertheless a widespread fear in the 70s and 80s (when a lot of this music was released) of satanic cults and ritualistic serial murders. You didn’t have to buy into the lyrics and imagery yourself in order to fear their potential societal consequences.

These concerns have pretty much completely vanished from the public consciousness, but you can see that analogous fears were perpetuated in the late 80s and early 90s with the advent and rise of gangsta rap. Even if you didn’t fall for the hardcore posturing, you couldn’t deny the very real effect it had on even suburban culture.