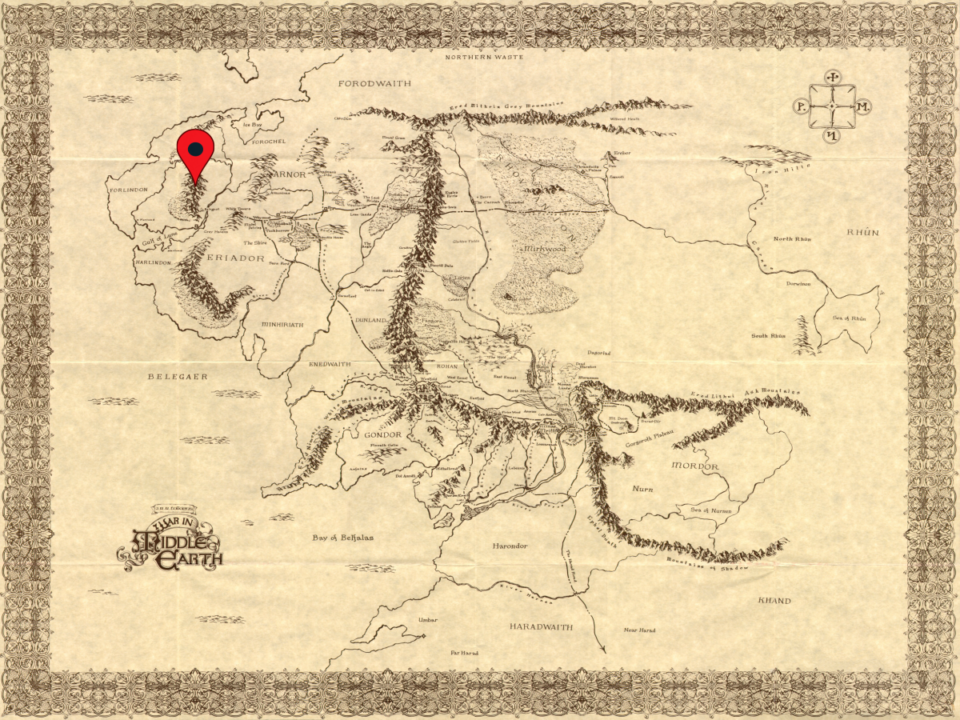 So Thráin and Thorin with what remained of their following (among whom were Balin and Glóin) returned to Dunland, and soon afterwards they removed and wandered in Eriador, until at last they made a home in exile in the east of the Ered Luin beyond the Lune. Of iron were most of the things that they forged in those days, but they prospered after a fashion, and their numbers slowly increased. But, as Thrór had said, the Ring needed gold to breed gold, and of that or any other precious metal they had little or none.

Though not quite as high as the Misty Mountains, the Blue Mountains (Ered Luin) once stretched as far south as their mighty neighboring range to the east. Many great peoples passed through their peaks on the way into Beleriand during the First Age. Along with Mount Gundabad (and two other unnamed peaks far to the east), the Blue Mountains were also one of the four birthplaces of the dwarves of Arda.

The dwarves thrived in the Blue Mountains throughout the First Age, and two of their greatest cities (Nogrod and Belegost) were built around the great Mount Dolmed (the Wet-head) in the northern section of the range. However, during the destruction wrought upon Beleriand in the aftermath of The War of Wrath, the Blue Mountians were broken in half, split by the Gulf of Lune. Mount Dolmed was sundered and sank beneath the waters of the gulf, while the great cities of Nogrod and Belegost were also ruined in the destruction.

Because the range was much diminished, and the presence of the deep tunnels that led to the most precious of metals were gone with the great cities of the dwarves, the dwarven presence in the Blue Mountains was much diminished in the Second Age. Most of the population relocated east to Moria, while a smaller number of dwarves stayed in the eastern slopes of the Blue Mountians to continue to mine iron and other metals of low worth but great utility.

The majority of the dwarven mines in the Blue Mountains from the Second Age on were in the portion south of the Gulf of Lune, though the northern section also held many mines and dwarven settlements (including the halls in which Thorin and company dwelt in exile during after the destruction of Erebor).

The Blue Mountains are of special significance to aspiring cartographers of Arda, because their location, along with the island of Himling, is the reference point for combining maps of Beleriand and Middle-earth.  Though their range was broken and much diminished, many of the northern peaks have existed since the First Age.  Indeed, who knows what ancient secrets lie undiscovered beneath the ancient stone of the Blue Mountains.  It is not inconceivable that even some remnants of Belegost and Nogrod might still lie beneath the ages of rock and dust to the north and south of the sundering Gulf of Lune.