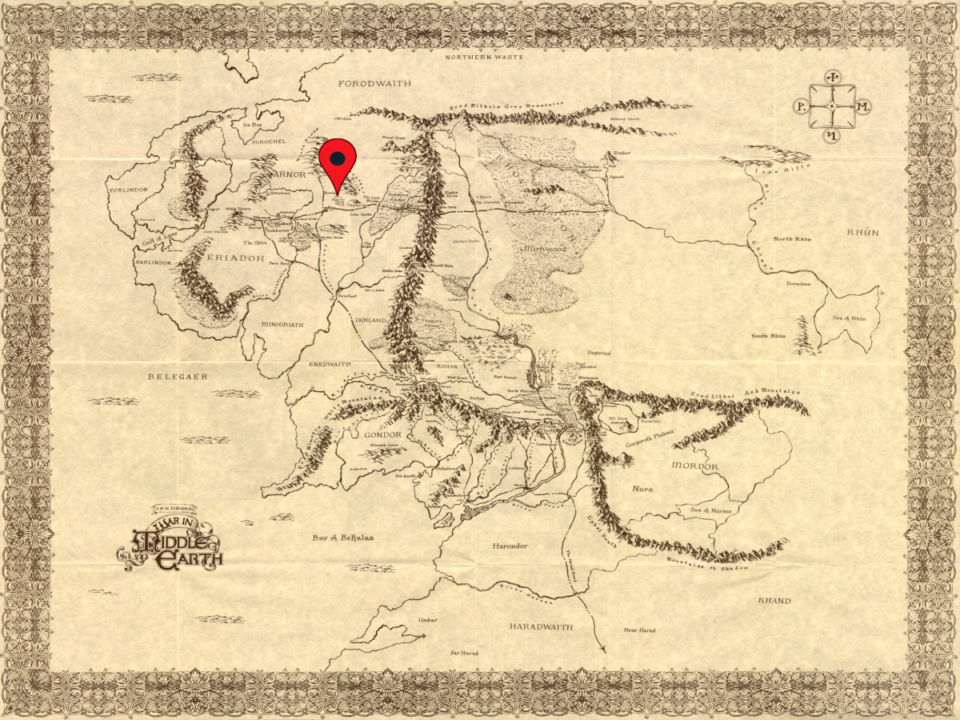 This month I’ll be discussing a small pocket of civilization on the edge of the Wilderland.

At last they left the village behind. The escort of children and stragglers that had followed them got tired and turned back at the South-gate. Passing through, they kept on along the Road for some miles. It bent to the left, curving back into its eastward line as it rounded the feet of Bree-hill, and then it began to run swiftly downwards into wooded country. To their left they could see some of the houses and hobbit-holes of Staddle on the gentler south-eastern slopes of the hill; down in a deep hollow away north of the Road there were wisps of rising smoke that showed where Combe lay; Archet was hidden in the trees beyond.

After the Road had run down some way, and had left Bree-hill standing tall and brown behind, they came on a narrow track that led off towards the North. ‘This is where we leave the open and take to cover,’ said Strider.

By the time of the War of the Ring, heading east from the Shire quickly led one to a largely uninhabited land of untamed wilderness and wild creatures. Aside from the hidden valley of Rivendell, Bree-land marked the eastern boundary of the inhabited lands West of the Misty Mountains.

The men of Bree claimed ancestry from that ancient group of men, the Gwathuirim, who later came to be known as Dunlendings.  Their ancient origins can be seen in the strange names of Bree-land, with the word Bree itself meaning “hill” in that ancient language, while “chet” (as in Archet or The Chetwood) meaning “forest”). As the Gwathuirim spread north out of Dunland, and into Tyrn Gorthad (that fell place that men named the Barrow Downs), the hill about which the settlements of Breeland arose became their most northern settlement.  And after the War of Sauron and the Elves, Bree-land became absorbed into the North Kingdom  of Arnor.  One by one the settlements to the south were abandoned (or devastated by the plagues that ravaged Cardolan during the 1600s) until only the four settlements of Bree, Staddle, Combe, and Archet remained.

Bree was the largest of the settlements, located on the Western side of  Bree hill, while Staddle was a on the opposite, more gently sloping western slopes.  Combe was further to the north, in a deep valley while Archet was within the borders of the forest known as the Chetwood.

All four settlements were an unusual mixture of men and hobbits, though Staddle contained the highest concentration of little folk.  Indeed, the hobbits of Bree-land had lived in the area for almost 2000 years by the time of The War of the Ring, having moved into the region around 1300 T.A., and could thus boast to be the oldest settlement of Hobbits in Middle Earth (having been in residence at Bree some 300 years before the founding of the Shire in 1601).

As the largest settlement of Bree-land, Bree was the most fortified as well.  Consisting of some 100 stone buildings (along with a lesser number of hobbit holes on the upper slopes), the town was protected by a thick hedge and dike on three sides.  Situated as it was, directly upon the intersection of The Great East Road and The Old North Road (The Greenway), a large inn called The Prancing Pony was the town’s most significant building.  And though The Greenway was little used by the time of The War of the Ring, and only dwarves, rangers, and the occasional wanderer still used The Great East Road, The Prancing Pony continued to thrive on the patronage of the folk from the four towns in Bree-land.

Rohvanian was a wild land, with little in the way of human habitation within it’s untamed contours.  But for those brave travelers who wished to explore its confines during the end of the third age, Bree-land, as ever, would have been an excellent starting point.  With the exception, of course, of The Forsaken Inn, a day’s ride east of Bree, but that was a place of reputation almost as dire as the surrounding countryside, and best avoided if it could be helped.