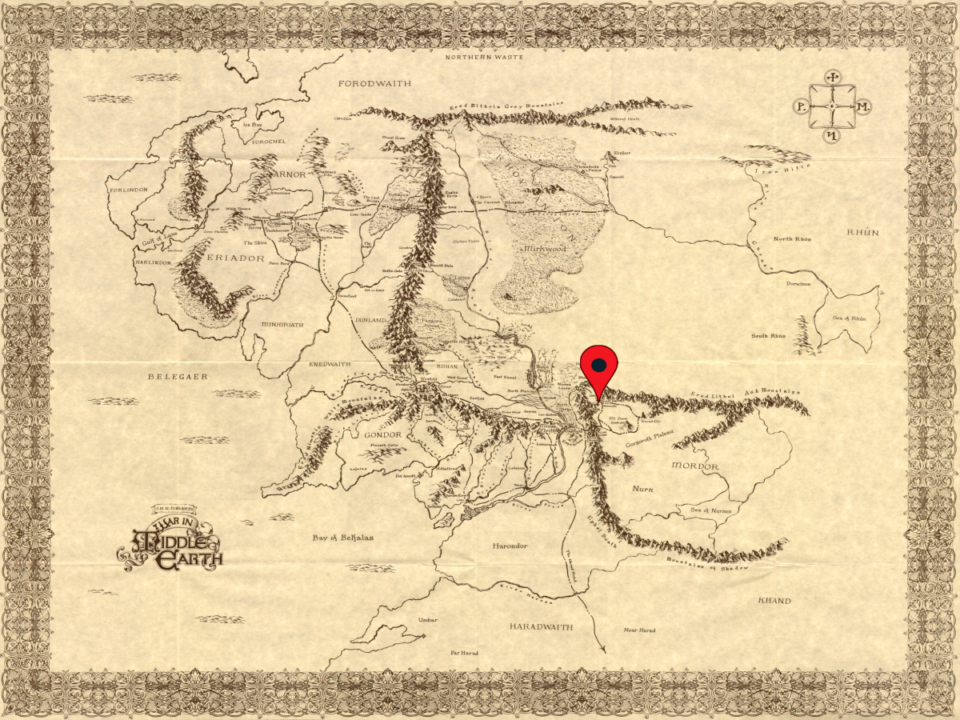 This month I discuss the second reason (aside from the Black Gate) why one does not simply walk into Mordor.

Ahead the water-course came to an end in broken steps of rock; for out from the main range there sprang a high barren spur, thrusting eastward like a wall. To meet it there stretched out from the grey and misty northern range of Ered Lithui a long jutting arm; and between the ends there was a narrow gap: Carach Angren, the Isenmouthe, beyond which lay the deep dale of Udûn. In that dale behind the Morannon were the tunnels and deep armouries that the servants of Mordor had made for the defence of the Black Gate of their land; and there now their Lord was gathering in haste great forces to meet the onslaught of the Captains of the West. Upon the out-thrust spurs forts and towers were built, and watch-fires burned; and all across the gap an earth-wall had been raised, and a deep trench delved that could be crossed only by a single bridge.

Just beyond Mordor’s impregnable Black Gate lay the deep valley of Udûn, a depression  some thirty miles in diameter that was catacombed with deep tunnels and hidden stores of weapons, supplies, and other battle sundries of far more nefarious purposes. Udûn was perhaps a caldera from some massive volcano during one of Middle-earth’s many periods of upheaval, and as such, was bounded by the mountains of shadow and ash on the west and north, while two spurs jutted out from the mountains proper in such a way that they almost touched on the south end of the bowl.

This point at the southern end of Udûn was known as the Carach Angren (or Isenmouth), meaning “Iron Mouth.” Though the pass was over five miles wide, a great earthen wall crowned by a long fence of iron spikes (perhaps the source of the name of the pass) had been erected as a last defense against an invading army before they could enter Mordor proper.  Below the wall a deep trench was dug, with only a single bridge as means of crossing.  Thus, the entire set of fortifications was quite formidable.

Of course, by the time of the War of the Ring, so great were the forces of Mordor, that such defensive preparations were almost completely unnecessary. The free peoples of Middle-earth had barely the forces necessary to bring the battle to the Black Gate, let alone breach such a well defended fortification.  Rather, it was two hobbits, entering Mordor through a high secret pass that brought down the power of Mordor, and their way was one that bypassed all of the fortifications of the Isenmouthe.