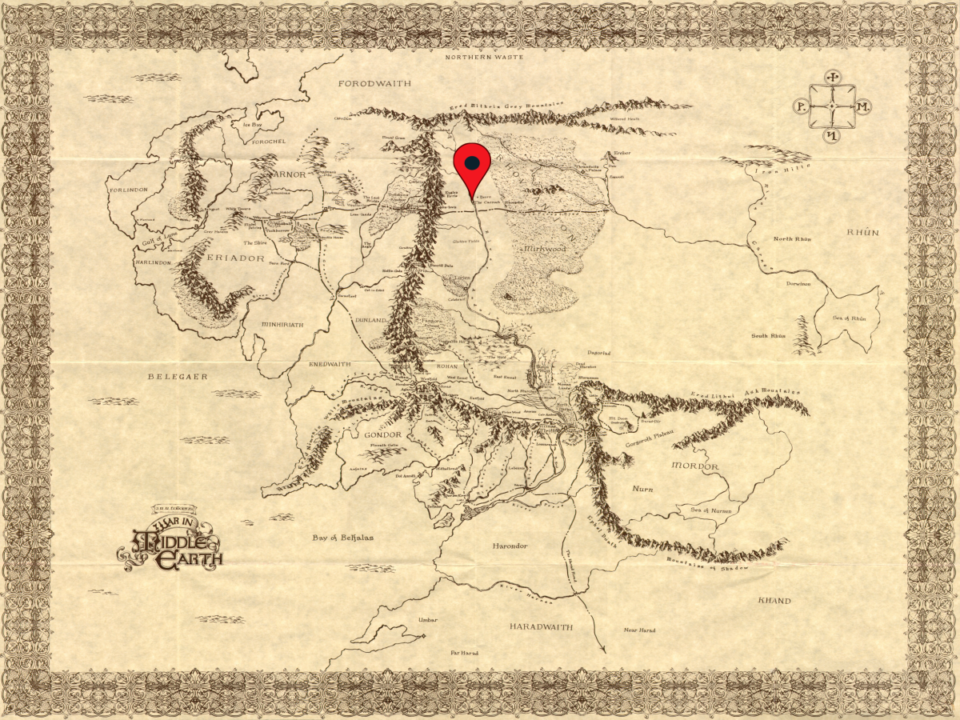 This month I’ll be discuss a large hill of rock right in the middle of the Anduin.

After a good while the eagles must have seen the point they were making for even from their great height, for they began to go down circling round in great spirals. They did this for a long while, and at last the hobbit opened his eyes again. The earth was much nearer, and below them were trees that looked like oaks and elms, and wide grass lands, and a river running through it all. But cropping out of the ground, right in the path of the stream which looped itself about it, was a great rock, almost a hill of stone, like a last outpost of the distant mountains, or a huge piece cast miles into the plain by some giant among giants.

The mighty River Anduin ran for hundreds of miles as it made its way to the Bay of Belfalas from its origins in the far north. Along the way it passed through many shallows, rapids, islands and even a great waterfall.  But the first major feature of the river that a traveler following its course from the north would have come across was the Carrock.  The Carrock was the skinchanger Beorn’s name for the great hill of rock that rose up from the center of the Anduin river not far from the High Pass of the Misty Mountains.  It was a word of uncertain etymology, or, as Gandalf put it: “[Beorn] called it the Carrock, because carrock is his word for it. He calls things like that carrocks, and this one is the Carrock because it is the only one near his home and he knows it well.”  There were some who even called it the “little Carrock,” as opposed to the “great Carrock” of Tol Brandir at the mouth of the Falls of Rauros to the south.

The eastern channel of the Carrock was quite shallow and was beset with large flat rocks that formed an easy ford to the Carrock proper during the drier months.  At the base of the Carrock on the eastern side was a small pebbled cave where Beorn would often sleep as bears were wont to do (for such were his urges when transformed to his bearish form).  Beorn had also carved great steps into the rock of the Carrock that led to its flat top.  From there he could see for many miles on all sides, and mountain orcs knew well to stay far away from the forbidding rock that was so often topped with his keen eyes.

The western side of the Carrock was a steep rock cliff that plunged straight into the deep swirling western channel of the Anduin.  Only Beorn in his bear form had the strength to brave such a perilous crossing. It has been the subject of some debate as to the exact location of the “Ford of Carrock” referred to by Glóin at the council of Elrond.  However, the steep western side of the Carrock and deep waters of the western channel of the Anduin would have made a very poor site for a ford.  More likely, Glóin was referring to the Old Ford where once a great stone bridge was built at the point in which the Old Forest Road met the Anduin some forty miles to the south.  The Beornings (whose toll so vexed Glóin) must have named this ford after the only recognizeable feature for miles around the Anduin.

It was a strange bit of geology, for the grassy oak and elm covered land on either side of the Anduin banks around the Carrock was devoid of any similarly large rock formations.  Some suggested it had been thrown into the river by a giant, but it dwarfed even the largest of giants which would have made such a thing quite improbable.  More likely it was the debris of some ancient cataclysm, perhapse it was once the top of a mighty mountain peak, rent in one of the many upheavals that shaped Middle Earth as it came to be known.  However it got there, it did not move again.  Not even thousands of years of the endless battering of the mightiest river in Middle Earth was able to again budge the Carrock.