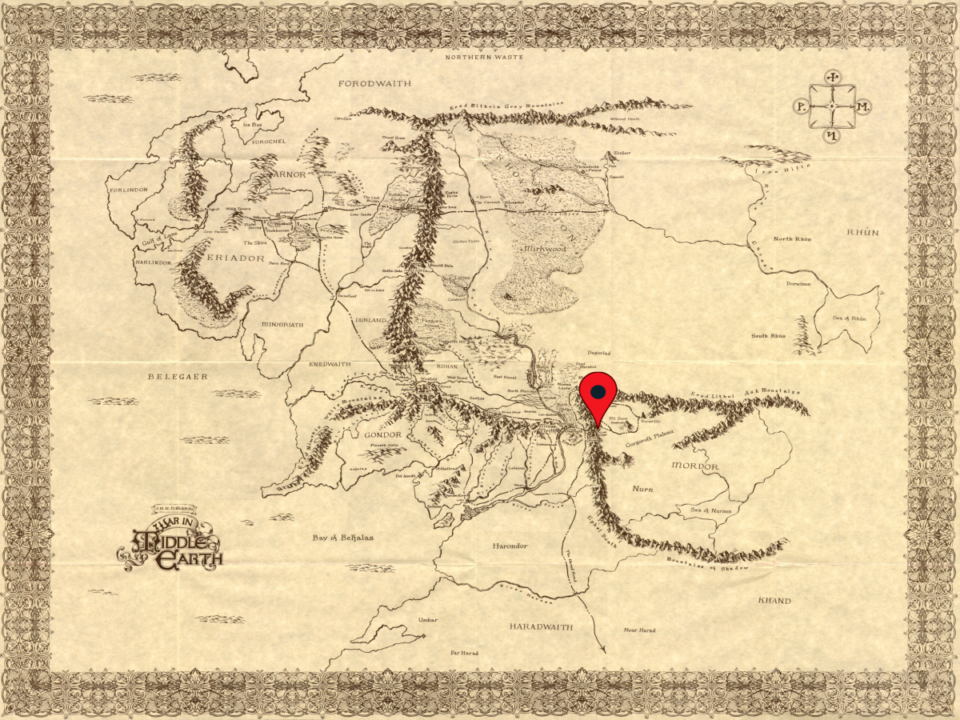 This month I discuss an entrance into Mordor that was really more of a cavernous spider-lair than pass proper:

It seemed light in that dark land to his eyes that had passed through the den of night. The great smokes had risen and grown thinner, and the last hours of a sombre day were passing; the red glare of Mordor had died away in sullen gloom. Yet it seemed to Frodo that he looked upon a morning of sudden hope. Almost he had reached the summit of the wall. Only a little higher now.

The Cleft, Cirith Ungol, was before him, a dim notch in the black ridge, and the horns of rock darkling in the sky on either side. A short race, a sprinter’s course and he would be through!

`The pass, Sam! ‘ he cried, not heeding the shrillness of his voice, that released from the choking airs of the tunnel rang out now high and wild. ‘The pass! Run, run, and we’ll be through, through before any one can stop us! ‘

Sam came up behind as fast as he could urge his legs; but glad as he was to be free, he was uneasy, and as he ran, he kept on glancing back at the dark arch of the tunnel, fearing to see eyes, or some shape beyond his imagining, spring out in pursuit. Too little did he or his master know of the craft of Shelob. She had many exits from her lair.

There were only two true passes into Mordor through the Ephel Duath: the Nargil Pass far to the south, and the Morgul Pass to the west.  However, in the high slopes above the Morgul Pass, as it cut its way through the Mountains of Shadow alongside the darkly flowing river Morgulduin, there was a third pass–of sorts.

Perhaps a pass in name only, Cirith Ungol (the Spider’s Pass) was only reachable after climbing two treacherous stairs.  The first, a long straight stair that climbed up from a tributary valley to the river Morgulduin until it reached a dizzying height, eventually led to a second winding stair that cut back and forth across a reclining cliff.  After this second stair, the pass led on to the mouth of a fetid black cave, rank with the smell of offal and worse things.  This cave was known as Torech Ungol (Spider’s Lair), and was the home to Shelob, the last spawn of Ungoliant.

A monstrous spider, Shelob had fled the destruction of Beleriand and lurked in the dark caverns of Cirith Ungol since before even the first stones of Barad Dûr had been laid.  There she had grown fat on the blood of all unfortunate creatures who happened through her pass. And there, within her honeycomb of tunnels, she waited with the patience born of eons of malice.

Those who passed the twelve miles of darkness that was Shelob’s lair, either by luck or by elven luminescence,  found themselves in a long cleft, the end of which terminated in a path that led to the Tower of Cirith Ungol.  A great, three tiered watchtower built by Gondor in the aftermath of the War of the Last Alliance, its purpose not to keep enemies out of Mordor, but rather to keep the enemies of Gondor within Mordor.  Sauron had made many additions over the years, most notably the pair of stone three-headed watchers that flanked its front gate.  Such was the power of the fell magicks with which the dark lord had imbued the watchers, that none but the stoutest hearted intruder might have passed their tireless stone eyes and entered the tower.

It was in this tower that the spider-poisoned Frodo was held prisoner, and it was beneath the two watcher’s gaze that brave Samwise Gamgee passed to rescue his master. And though the might of Mordor fell with the destruction of the One Ring, Shelob lived on.  Gravely wounded by the hobbits’ elven blade, she withdrew into the shadows of Cirith Ungol, vomiting her malice forth from the darkest depths of her caverns for ages to come.

Great post. I have a couple of minor nitpicks. You say “Cirith Ungold” once. And I’m not sure what you mean when you say the cleft “led to the top of the Tower of Cirith Ungol.” Neither the gate with the Watchers nor the undergate is at the top of the tower.

Yeah, I ended up staying up way too late before I got around to writing this, so I was pretty damn tired while I wrote this and didn’t feel much like proofreading (as usual).

Also I spent a lot of time trying to figure out just what Cirith Ungol referred to. The books (as well as myself) seem to incorrectly use it interchangeably with the Morgul Pass, tough to pin down if it meant the upper pass, Shelob’s Cave, or just the small cleft after the Cave, or the Tower itself. Based on context I’d say it was the name of the entire “upper” section of the Morgul Pass…even though, aside from people trying to sneak into Mordor, it doesn’t seem to be much use as a pass when there is a perfectly good one right underneath its endless stairs and caves.