Middle-earth Monday 7: The Crossings of Poros 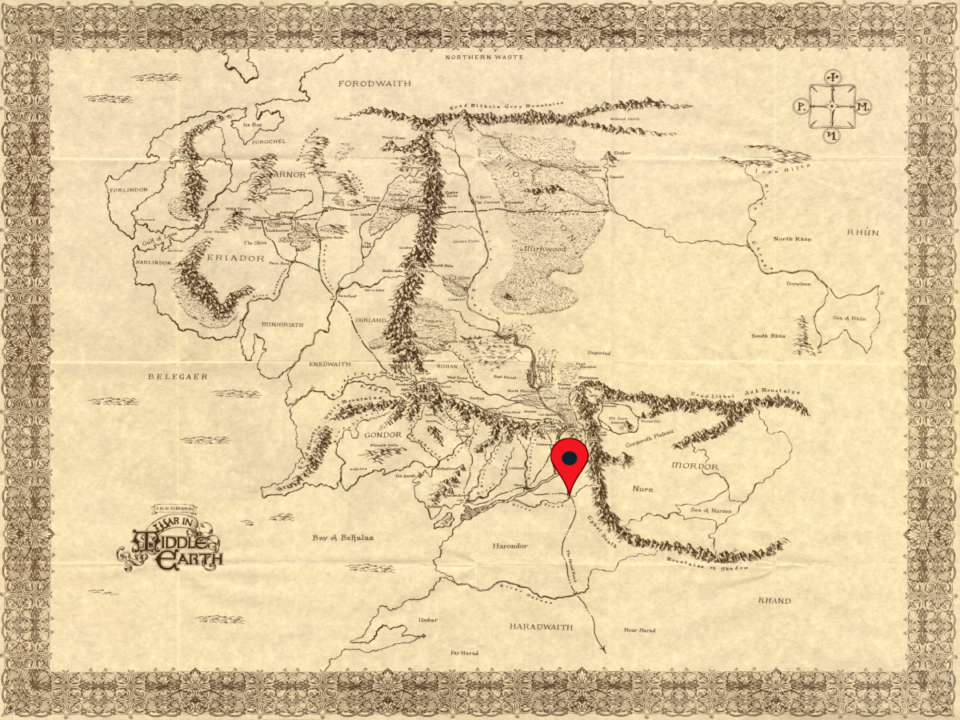 This month I’ll be discuss the famous fords of the river Poros, the gateway to the realm of Gondor from the South.

It was Túrin that built secret refuges for his soldiers in Ithilien, of which Henneth Annûn was the longest guarded and manned. He also fortified again the isle of Cair Andros to defend Anorien. But his chief peril lay in the south, where the Haradrim had occupied South Gondor, and there was much fighting along the Poros.

Gondor, at its peak, once extended as far to the south as the river Harnen in near Harad.  However, after the Kin-strife and the use of Umbar as a base for Gondor’s enemies by the grandsons of Castamir the Usurper in 1448 the land of South Gondor (also known as Harondor) between the rivers Harnen and Poros became a territory of debatable ownership.

The river Poros, a tributary of the mighty Anduin, became the new Southern boundary of Gondor.  It had but a single fordable area where the Harad Road crossed it on its way North.  The lands immediately East of the Crossings of Poros were close enough to the rocky slopes of the Ephel Dúath to be all but impassible to a large army.  And to the West the river was too wide and swift to make and easy crossing feasible.  Thus the Crossings of Poros were of dire strategic importance to Gondor, for all armies invading through the desert land of Harondor needed to pass through the fords to enter the realm.

The first invasion across the fords came in 1944 when the Wainriders allied with the men of Khand and Harad in order to attack Gondor from the North (through the southern corridor beneath the Sea of Rhun) and South simultaneously.

It is told that Eärnil, the captain of the Southern Army, did not defend the fords, but instead fell back into the rugged land of Ithilien some 40 miles to the north of the Crossings of Poros.  Accounts are hazy as to why he chose to ignore the natural barrier of the fords, but I can assume it was because the rugged land of South Ithillien would have been a poor battleground to say the least for the chariots of the Wainriders.

Regardless, Eärnil won a great victory against the invading Southern army and was able to reach the beleaguered Northern army in time to route the remaining enemy forces from Gondor.

It was not until 2885 that the fords of Poros were again crossed in malice against Gondor.  Instigated by Sauron, the Haradrim rose up to attack Gondor with their full might.  It would have been a grim time for Gondor had Rohan forgotten the Oath of Eorl and the debt to Beregond.***

Thankfully these debts were not forgotten as King Folcwine of Rohan sent his twin sons Folcred and Fastred with a great host of Rohirrim to Gondor’s aid.  This time the fords themselves were defended.  The battle was cruel and fierce, and though the Hardrim were driven back, both of King Folcwine’s sons were killed in the fighting.

As was the manner of their people the Rohirrim buried the brothers in one (since they were twins) great burial mound directly upon the banks of the river Poros next to the fords. Haudh in Gwanûr it was called, and few were the enemies of Gondor who did not quail to pass it.

Yet it was passed one final time during the War of the Ring.  Gondor had grown so weak by that time that they were unable to stop the crossing.  However, the enemy did not pass through the lands of Gondor unscathed.  Faramir and his rangers, perhaps remembering the tactics of Eärnil a thousand years before, caused a fair hurt to the long columns of Haradrim as they made their way North through the craggy forested lands of Ithilien!

***300 years earlier Eorl the Young had saved Cirion from the Balchoth and was given the lands of Rohan in exchange for his Oath that the Rohirrim would always defend Gondor in times of need.  And during the long winter of 2758 Beregond, son of Beren came to Rohan’s aid when all seemed lost as the Dunlendings invaded the crippled Rohan.