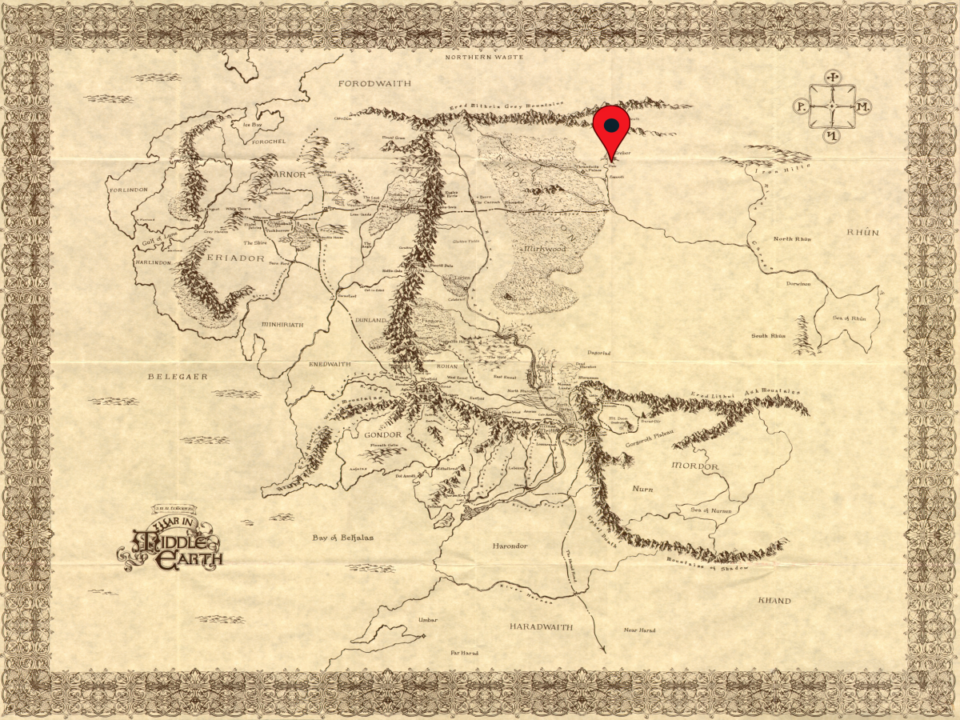 This month I discuss a town doomed twice to be reduced to rubble:

They marched under the grey and silent cliffs to the feet of Ravenhill. There the river, after winding a wide loop over the valley of Dale, turned from the Mountain on its road to the Lake, flowing swift and noisily. Its bank was bare and rocky, tall and steep above the stream; and gazing out from it over the narrow water, foaming and splashing among many boulders, they could see in the wide valley shadowed by the Mountain’s arms the grey ruins of ancient houses, towers, and walls.

“There lies all that is left of Dale,” said Balin. “The mountain’s sides were green with woods and all the sheltered valley rich and pleasant in the days when the bells rang in that town.” He looked both sad and grim as he said this: he had been one of Thorin’s companions on the day the Dragon came..

Dale was once one of the most beautiful cities of the North. Founded in the time of Thorin’s grandfather (sometime after the founding of Erebor in 2590), Dale was a merry city, full of sparkling fountains, ringing bells, and a toy market that was the wonder of the North.  In those days, the men of Dale prospered by trading food (which the dwarves did not bother grow themselves) for marvelous dwarven smithwork and near magical toys of uncommon craftsmanship.  Indeed, the toy market of Dale was one of the great wonders of the North during that time.

However, in 2770, when Smaug the Golden descended on Erebor, Dale was destroyed along with the great dwarven city.  And there it sat in ruins until it was finally refounded 2944 after the Battle of Five Armies–with Bard the Bowman as its leader.  Bard ruled until 2977, followed by his son Bain until 3007, and in those 60 some years Dale grew to be a great kingdom whose borders stretched past Esgaroth, and reached all the way to the banks of the Carnen.

This long prosperity turned out to be short lived when a great host of Easterlings, acting in tandem with Sauron’s armies in the south descended upon the Dale and Erebor in 3019.  Brand, son of Bain, and Dain Ironfoot were both slain in the battle of Dale.  The town was put to the torch and the defenders fell back to Erebor where they endured a 7 day siege until Bard II and Thorin III, sons of the slain kings of Dale and Erebor, rallied the defenders and broke the siege on March 27th, 3019.

Dale was once more and for the final time rebuilt, and both men and dwarves lived in peace under the crown and protection of Ellessar, the King of the West.

Ahh Dale and Erebor one of my many favourite places in Middle Earth :). I always wondered about the kingdom of Dale, the vast realm it became, the lands between rivers Carnen and Celduin is a huge territory. There must have been many new towns and cities build there, with myriads of smaller villages and farms (also there must have been people living near Iron Hills, to provide dwarves with food, and they too would become part of this realm, though that’s speculative, I wonder also whether Lonely Mountain and Iron Hills were joined as united realm since Dain ruled both, maybe even some part of lands on hte northern side, between those two mountain masses were nominally part of dwarven kingdom too?).
There is nice written essay by Michael Martinez “Resurrecting Dale, city of a thousand untold stories” that I like. This place really captivates the imagination, maybe some of the inhabitants like of old had a “trick of understanding their (thrushes) language”, many original inhabitants could surive among people in the south of Esgaroth from whom Bard recruited his great following 🙂 and as he was descendant so there could be many more of those (I also similarly wonder whether there were more skin-changers among Beorning, The Hobbit seems to imply that the bear gathering at night some of those bears could have been actually shapeshifitng men, certainly descendants of Beorn retained his powers), and who knows maybe bow from which ‘magic Black Arrow’ was shot is a prized heirloom of thekings of Dale kept in jewelled cascket hehehe. The northern Wilderland/Rhovanion is really fascinating place also due to close connections of three races: “and there was friendship in those parts between elves and dwarves and men.”