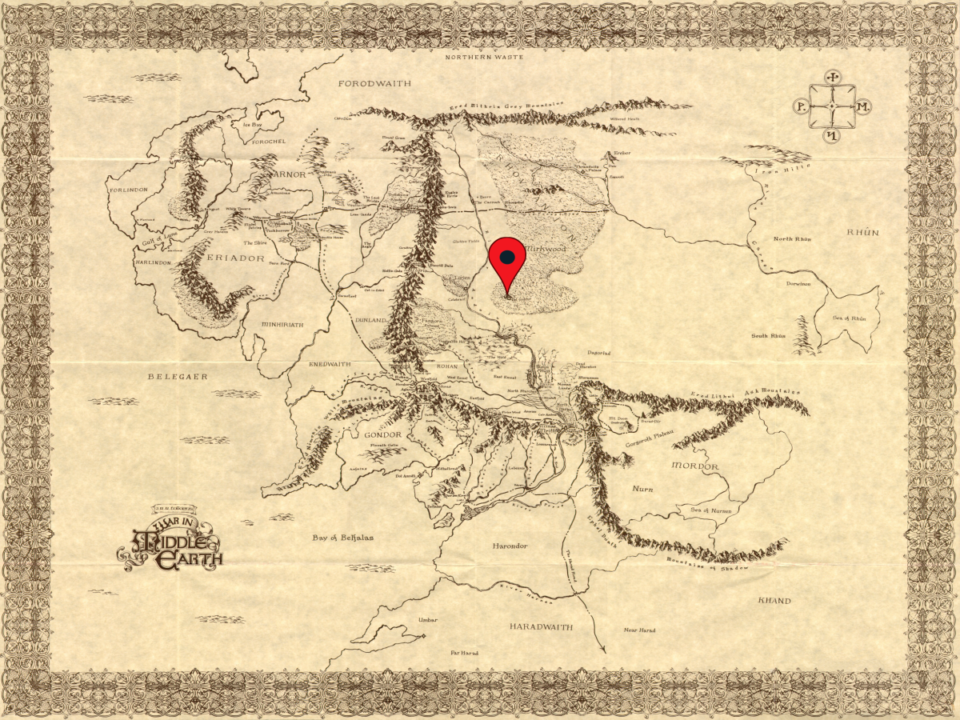 Welcome back to everyone’s favorite www.isleyunruh.com Monday feature! Middle-earth being the place of enchantment and wonder that it is, each month I will use my love of fictional cartography to transport you to another time and place. So why not take a moment to fill your head full of knowledge that will have no bearing at all on the real world? This month I’ll be discussing Sauron’s fell stronghold Dol Guldur, corrupter of Greenwood the Great.

`There lies the fastness of Southern Mirkwood,’ said Haldir. `It is clad in a forest of dark fir, where the trees strive one against another and their branches rot and wither. In the midst upon a stony height stands Dol Guldur, where long the hidden Enemy had his dwelling. We fear that now it is inhabited again, and with power sevenfold. A black cloud lies often over it of late. In this high place you may see the two powers that are opposed one to another; and ever they strive now in thought, but whereas the light perceives the very heart of the darkness, its own secret has not been discovered. Not yet.’

In the early days of the Third Age Mirkwood was a verdant place of beauty called Greenwood the Great.  Its southern reaches were home to the grass carpeted hill of Amon Lanc (the naked hill) whose slopes were free of the dense trees of Greenwood the Great.  All this changed in the year 1050 when spirit of Sauron, the Base Master of Treachery, finally became corporeal again after a thousand years of formless hiding in the dark places of middle earth in the aftermath of his battle against the Last Alliance.  He crept with his minions under cover of darkness and stormclouds to the Amon Lanc and there built a great fortress.  As tall as its great central watchtower was, the black pits beneath the fortress were twice as deep.  In those pits Sauron bred many a fell and wretched creature as he slowly regained his strength.  The black magicks and foul monsters (of which the offspring of Shelob were just one such evil unleashed upon the forest) that issued from the pits of Dol Guldur infected the surrounding forest like a mortified wound until the entire forest was in the grip of Sauron’s evil.  It came to be known as Mirkwood, and it was a place (with the exception of the elven King Thranduil’s realm, which held the evil at bay) that was feared by all who tread its twisted passages.

The trees grew twisted and black, their sagging boughs rotted and full of the smell of death.  The grass upon the Amon Lanc shriveled and died, leaving only bare rocks like a great hill shaped scar in the middle of a diseased forest.

This was the new evil that perhaps brought the Istari to Middle Earth.  Arriving around the year 1100, this council of 5 “wizards” was meant to protect Middle Earth from evils such as Sauron’s new fortress.  However, the Wise did nothing for a thousand years (not knowing the true nature of the “necromancer” of Dol Guldur) until Gandalf himself went to the fortress in 2063.  Sauron however, fled into the East, leaving no evidence of his return to Middle Earth behind him.

However, in 2460, Sauron returned to Dol Guldur, with renewed strength.   It was there that he sought the remaining rings of power for 400 years.  In 2845 he captured Thráin, son of Thrór, taking from him the last of the seven dwarven rings of power (that had not been destroyed in the bellies of the northern dragons).  Five years later Gandalf again entered Dol Guldur, coming too late to save Thráin, but finally learning of the true nature of the “necromancer” who had haunted the hill for the last two thousand years.  However, the council would still not attack the fortress for another 100 years as the council’s leader Saruman had become corrupted and wished to find the One Ring for himself.  It was not until 2941 that he finally agreed to the attack on Dol Guldur, if only to prevent Sauron from finding the One Ring before he did.

The wrath of the council drove Sauron from his fortress.  But it was too late, for Sauron’s plans had been too long in the making.  He already had a new fortress prepared, the great tower of Barad-dûr, in the land of Mordor where the shadows lie.  Ten years later, in 2951, he sent the Nazgûl Khamûl (The Black Easterling) to reoccupy Dol Guldur.  His were the armies that threatened all of Rhovanion during the War of the Ring.  However, the elf realms of Lorien and Mirkwood held fast and eventually took the battle to the very doors of Dol Guldur itself.  And there, Galadriel cast down its walls, cleansing its pits with the light of day.  And from that day forth (March 28th of 3019) the festering wound upon Greenwood the Great that was Dol Guldur was cleansed.  And such was the resilience of the deep roots of the forest that its prior beauty was not forgotten.  The 2000 thousand years of shadow that had blanketed the canopy of Greenwood the Great soon passed like rain on the mountain.

ANOTHER THRILLING INSTALLMENT OF WHAT IS SURE TO BE EVERYONE’S FUTURE FAVORITE! NEVER EVER STOP WRITING THESE!

Future favorite? Are you saying it is not everyone’s current favorite?

Believe it or not, I actually read this one. Of course, I usually do when it’s about evil shit.

But how will you know if they are about evil shit unless you read them?

If it’s a black metal band or album, I’m golden.

Yeah, that part about The Long Lake where you were all like, “And Lake-town was refounded and was more prosperous than ever, and much wealth went up and down the Running River; and there was friendship in those parts between elves and dwarves and men.” That was truly hellish \m/

True, it looks like there are only 8 metal bands named after Lake-town: http://www.metal-archives.com/search?searchString=esgaroth&type=band_name