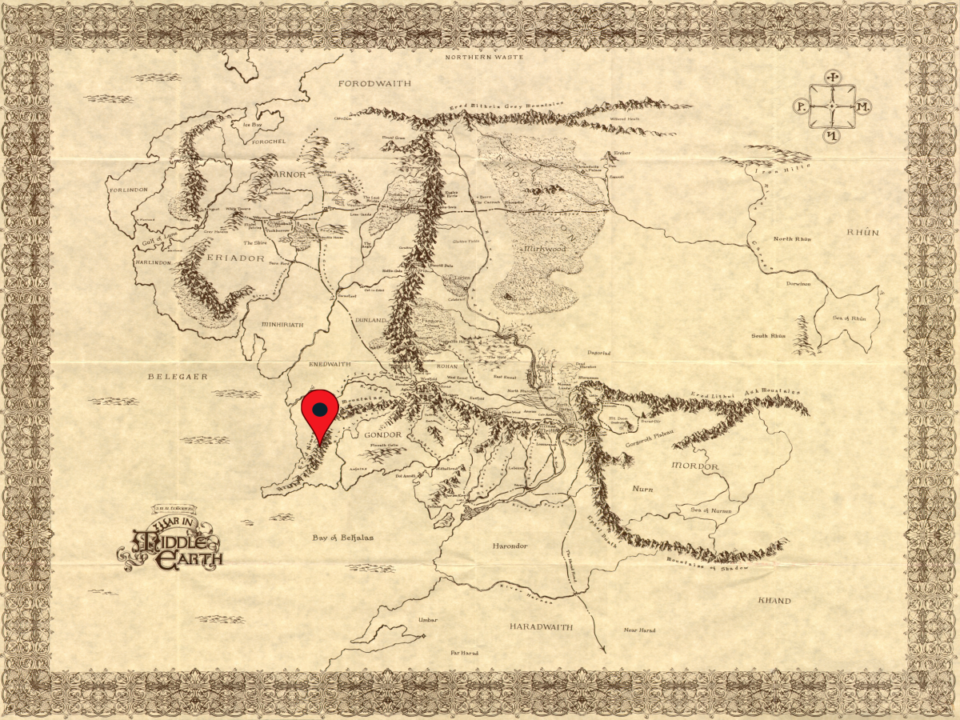 This month I’ll be discussing Drúwaith Iaur and its mysterious inhabitants.

‘Nay, nay,’ said Elfhelm, ‘the enemy is on the road not in the hills. You hear the Woses, the Wild Men of the Woods: thus they talk together from afar. They still haunt Drúadan Forest, it is said. Remnants of an older time they be, living few and secretly, wild and wary as the beasts.’

The Woses referred to by “Elfhelm” in the above quote were a strange race of men, stunted and gnarled (or, as Tolkien described them, “short-legged and fat-armed, thick and stumpy”).  At the time of the War of the Ring they were only known to exist in the Drúadan Forest.  However, today we will look at another settlement of Woses, the rocky, deserted region of Drúwaith Iaur (Old Púkel-land) on the peninsula of Andrast.

Drúwaith Iaur was located between the river Isen (and its tributary the Adorn) to the North and the river Lefnui to the East.  Much of the land was covered in rocky, low lying mountains that were an extension of the Ered Nimrais (White Mountains).  The land swept down to the Southwest and ended in the long peninsula of Andrast (Ras Morthil) that seperated the Bay of Belfalas from the Great Sea.

Drúwaith Iaur was a rugged land, far less hospitable to human habitation than the Pinnath Gelin (Green Hills of Gondor) to the immediate East of the river Lefnui.  Thus, except for the western terminus of Gondor’s chain of signal towers, the land was assumed uninhabited by most of the scholars of middle earth.

Yet, as mentioned above, the land was far from uninhabited.  In secret caves throughout the low mountains lived another branch of the mysterious Woses.  The Woses called themselves the Drughu, while the elves called them the Drúedain (singular: Drúadan).  Woses was the name given them by the men of Rohan, though the Rohirrim also used the term Púkel-men.  The orcs called them Oghor-hai, and their poisoned arrows were feared as much as the noontide sun.  No one knows how far back the history of the Drúedain goes; it is even conjectured that they had been responsible for carving the haunted halls of Dunharrow (guarded by the “Púkel-men” statues whose not disimilar likenesses to the Drúedain were probably no coincidence).

Sometime during the second age, the Púkel-men were driven from the White Mountains by the encroaching settlements of men, and thus, after retreating to the mountains of  Drúwaith Iaur, they all but disappeared from Middle Earth (with the settlement in the Drúadan forest as the noteable exception).

However, like the people of Ghân-buri-Ghân in the Drúadan forest on the Eastern end of the White Mountains, the Woses of Old Púkel-land found themselves driven into the open during the War of the Ring.  In the aftermath of the Battle of the Fords of Isen, the Drúedain left their hidden homes to dispatch the retreating orcs that had wandered into their land.

Yet, in the aftermath of the War of the Ring, as the Fourth Age (The Age of Man) dawned, the Drúedain of Drúwaith Iaur retreated once more into their hidden caves.  Who knows how long their mysterious people persisted in Old Púkel-land, a throwback race of seemingly primitive wildmen whose ancient history held more secrets than anyone then or now will ever know.