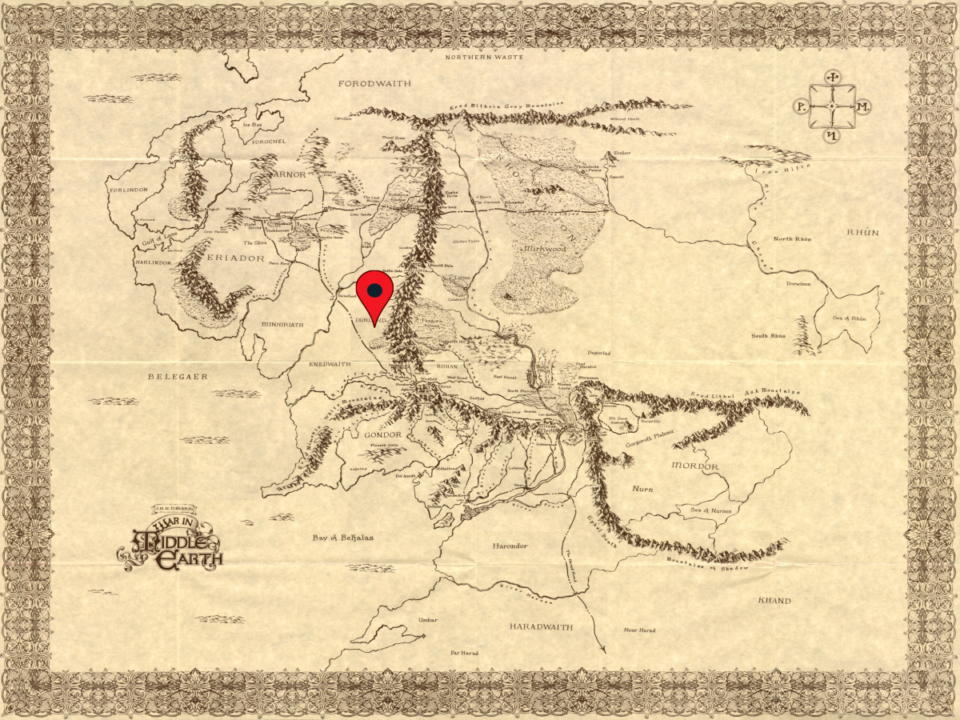 This month I’ll be discuss tribal Dunland on the southwestern slopes of the Misty Mountains.

Aragorn looked at the pale stars, and at the moon, now sloping behind the western hills that enclosed the valley. ‘This is a night as long as years,’ he said. ‘How long will the day tarry?’

‘Dawn is not far off,’ said Gamling, who had now climbed up beside him. ‘But dawn will not help us, I fear.’

‘Yet dawn is ever the hope of men,’ said Aragorn.

‘But these creatures of Isengard, these half-orcs and goblin-men that the foul craft of Saruman has bred, they will not quail at the sun,’ said Gamling. ‘And neither will the wild men of the hills. Do you not hear their voices?’

‘I hear them,’ said Éomer; ‘but they are only the scream of birds and the bellowing of beasts to my ears.’

‘Yet there are many that cry in the Dunland tongue,’ said Gamling. ‘I know that tongue. It is an ancient speech of men, and once was spoken in many western valleys of the Mark. Hark! They hate us, and they are glad; for our doom seems certain to them. ‘The king the king!’ they cry. ‘We will take their king. Death to the Forgoil! Death to the Strawheads! Death to the robbers of the North!’ Such names they have for us. Not in half a thousand years have they forgotten their grievance that the lords of Gondor gave the Mark to Eorl the Young and made alliance with him. That old hatred Saruman has inflamed. They are fierce folk when roused. They will not give way now for dusk or dawn, until Théoden is taken, or they themselves are slain.’

‘Nonetheless day will bring hope to me,’ said Aragorn. ‘Is it not said that no foe has ever taken the Hornburg, if men defended it?’

‘So the minstrels say,’ said Éomer.

‘Then let us defend it, and hope!’ said Aragorn.

If one were to travel west through the Gap of Rohan and then follow the Misty Mountains north, they would travel through a wild country of low craggy hills to the east that slowly settled into rolling grasslands to the west.  This land, the eastern section of the great kingdomless expanse of the Enedwaith, the land between two kingdoms, was called Dunland.  It was bordered by the Glanduin to the north, and the great North-South road to the west, and its inhabitants were a wild, tribal people with little love for their neighboring kingdoms.  The lowlands were peopled by shepherds and farmers, and though a suspicious folk, they traded with merchants in the area and were not overtly hostile to travelers in their lands.  As the lowlands grew into the outlying hills at the base of the misty mountains, the people too grew into a great fearsome folk, large enough to give even a warrior as seasoned as Gimli, son of Gloin pause in battle.

Though, Gimli’s reluctance to fight the fierce hill men could have stemmed from a respect his people held for the Dunlendings.  Many of Durin’s folk dwelt with the Dunlendings during various periods of exile, including Thrór, Thráin, Thorin, Balin and Glóin at various times.  Thus, it can be surmised that their peoples were on good terms.  Even hobbits were welcome in the region, as the Stoors migrated over the Redhorn Pass into Dunland in 1150 T.A. (that is, until they eventually fled the region in 1300 due to an increased number of orc attacks from the Misty Mountains). Only the elves were unwelcome, for their magical nature had no place among such an earth bound folk.

Dunland was founded during the Second Age as hill-men in the vales of the white mountains, the same folk who were later cursed to await the coming of the king in the Paths of the Dead, migrated northwards.  These ancient men were swarthy and dark complected, which was the cause of the name Dunland (literally “Brown Land,” not, as some have thought, any relation to the Elvish “Dûn” for West).  However, due to their tribal, secretive ways, they were never able to form into a power that might have been anything more than a nuisance to their old enemies the Rohirim.

The fued between the Dunlendings and the Rohirim went all the way back to 2510 T.A., when Steward Cirion granted Eorl and his people the land of Calenardhon to dwell in after their aid to Gondor against the Balchoth.  This, meant that the Dunlendings who dwelt there were displaced. Many of the Rohirim looked down upon the darker skinned race of the Dunlendings as being of inferior racial stock, and thus a great deal of barely suppressed racial oppression often accompanied the uprooting of the Dunlendings from their homes.  The Dunlending’s retaliated in kind, and took to calling the Rohirim “Forgoil” (“straw-hairs” in their ancient language) along with other less palatable things.

The hatred of the Dunlendings for the Rohirim led to constant raids and attempts to reclaim their lands.  In 2710 T.A., they pushed as far east as Isengard, which they managed to occupy until 2758 T.A. when Wulf, son of Freca, led a great force south and captured Edoras during that dark winter when Rohan was assailed by enemies from all sides.  And though Edoras was recaptured and Wulf slain the following year, the Dunlendings were every vigilant for an opportunity to strike again.  Thus, when Saruman the White amassed his great army of orcs and other fell beasts during the War of the Ring, the Dunlendings were quick to accept his offer of alliance against their common enemy the Rohirim.

Did the “mercy” of the Rohirim in the aftermath of the Battle of Helm’s Deep finally end the hatred wrought by 500 years of racial oppression?  At first it would seem so as there was never again strife between their peoples.  However, with the rebuilding of Gondor into an even greater empire, an empire who continued to supply Rohan, their ally against the frontier, with arms and goods, perhaps the Dunlendings finally gave up their fight against an occupier who had grown far too strong for their scattered tribal culture to be able to offer any kind of meaningful resistance.