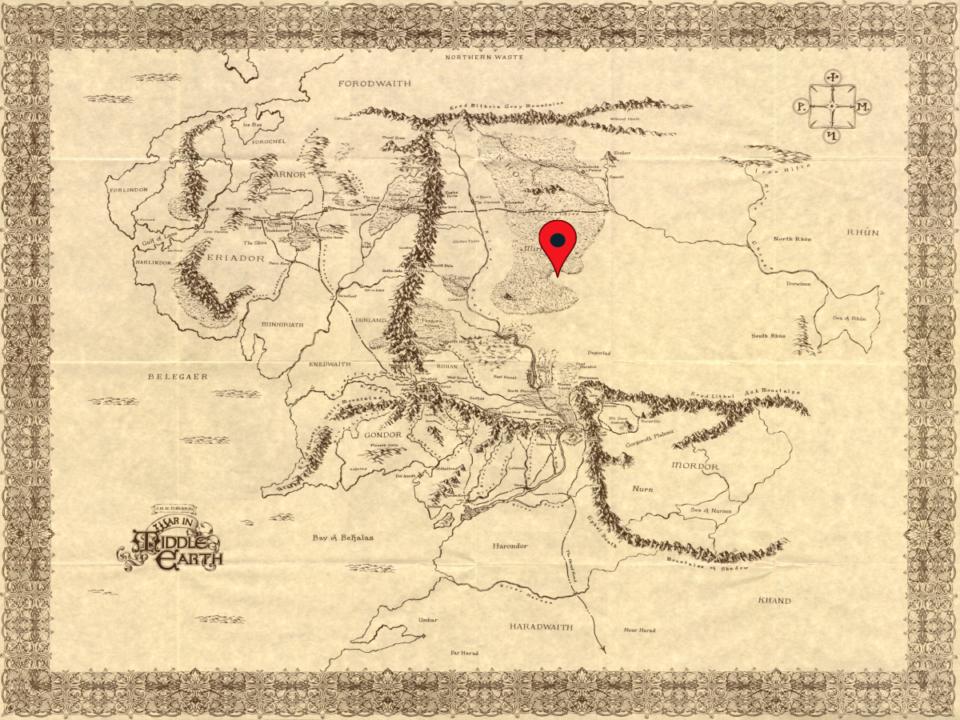 This month I’ll be discussing the narrows of Mirkwood and the men who made them so.

The Éothéod…were a remnant of the Northmen, who had formerly been a numerous and powerful confederation of peoples living in the wide plains between Mirkwood and the River Running, great breeders of horses and riders renowned for their skill and endurance, though their settled homes were in the eaves of the Forest, and especially in the East Bight, which had largely been made by their felling of trees.

Mirkwood (aka Greenwood the Great in happier times) was an ancient forest.  Its trees stood for thousands of years and its roots clove earth that still remembered the darkness before the first age of the sun.  And for those thousands of years the forest existed much as it stood at the end of the Third Age: almost 100,000 square miles of the densest forest on Middle Earth.  In fact, the only noticeable change to its shape in all that time was wrought not in the cataclysm of making the earth round, nor by the downfall of Numenor, but rather by the hand of man.  I am referring to the 250 square mile chunk that had been taken out of the southern section of Mirkwood on its eastern border that came to be known as the East Bight.  The East Bight created the “narrows” of Mirkwood–though, at 80 miles across (4 times the length of the Old Forest) it still did not make passage through the dark branches of the forest an easy task.

As mentioned by our opening quote (from The Unfinished Tales), the men who created the East Bight were “Northmen,” ancestors of the Éothéod.  For over a thousand years  the Northmen harvested the trees of what would become the East Bight for home, heat and commerce.  It is a testament to their numbers and industrious ways to consider that within that time over 25 million trees were felled.

However, the days of the Northmen in Rhovanion were numbered.  First, when the dark lord Sauron in the year 1050 T.A. turned the nearby hill Amon Lanc into the fell fortress of Dol Guldur, much evil escaped his fortress and was unleashed upon the surrounding areas.  And though the effect of this evil tide on those who dwelt within the shadow of the trees was as dark and mysterious as its source, it was nothing when compared to the blow struck by the great plague of 1636.  With poor shelter and medicinal understanding coupled with the bitter winter of that year, over half the Northmen and their horses lost their lives to the ravages of the plague.  And thus, weakened and slow to recover, the Northmen were finally decimated by the invasion of the Wainriders in 1851.

However, the mark of the Northmen upon the shape of Mirkwood did not fade.  As the centuries passed, the East Bight continued to allow no tree within its peaceful meadows.  The stumps of the old trees had rotted away centuries ago and the thick grasses of the area choked away any new sapling that might infringe upon the area.  The effect of the Northmen upon the great primeval forest was a telling portent of the Age of Man that was soon to come.

Nice post. Is “Dol Guldor” a typo or alternate spelling?

Misspelling… I was thinking Arnor, Eriador, Gondor etc when I typed that. Fixed!