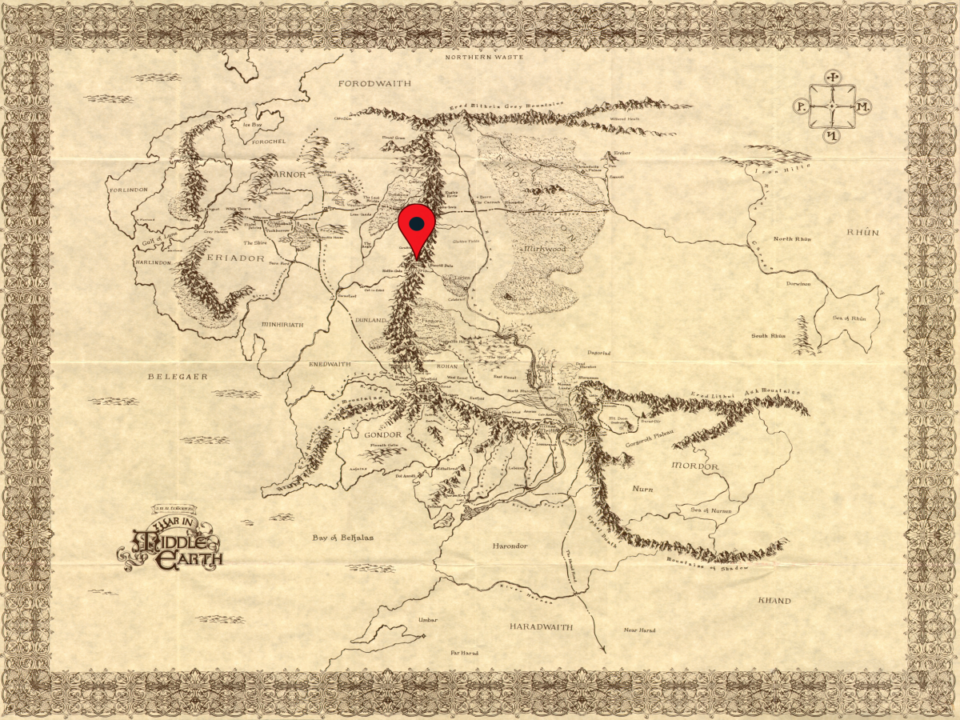 This month I discuss the highest tower in Arda (post-breaking of Thangorodrim, of course):

‘We fought far under the living earth, where time is not counted. Ever he clutched me, and ever I hewed him, till at last he fled into dark tunnels. They were not made by Durin’s folk, Gimli son of Glóin. Far, far below the deepest delving of the Dwarves, the world is gnawed by nameless things. Even Sauron knows them not. They are older than he. Now I have walked there, but I will bring no report to darken the light of day. In that despair my enemy was my only hope, and I pursued him, clutching at his heel. Thus he brought me back at last to the secret ways of Khazad-dûm: too well he knew them all. Ever up now we went, until we came to the Endless Stair.’

‘Long has that been lost,’ said Gimli. ‘Many have said that it was never made save in legend, but others say that it was destroyed.’

‘It was made, and it had not been destroyed,’ said Gandalf. ‘From the lowest dungeon to the highest peak it climbed. ascending in unbroken spiral in many thousand steps, until it issued at last in Durin’s Tower carved in the living rock of Zirak-zigil, the pinnacle of the Silvertine. There upon Celebdil was a lonely window in the snow, and before it lay a narrow space, a dizzy eyrie above the mists of the world. The sun shone fiercely there, but all below was wrapped in cloud. Out he sprang, and even as I came behind, he burst into new flame. There was none to see, or perhaps in after ages songs would still be sung of the Battle of the Peak.’ Suddenly Gandalf laughed. ‘But what would they say in song? Those that looked up from afar thought that the mountain was crowned with storm. Thunder they heard, and lightning, they said, smote upon Celebdil, and leaped back broken into tongues of fire. Is not that enough? A great smoke rose about us, vapour and steam. Ice fell like rain. I threw down my enemy, and he fell from the high place and broke the mountain-side where he smote it in his ruin. Then darkness took me; and I strayed out of thought and time, and I wandered far on roads that I will not tell.

Stretching from Durin’s Door, to the silvered waters of the Mirromere, Khazad-dûm was a mighty dwarven kingdom that spread out for some 40 miles beneath three mountains.  It was the southernmost of these three peaks, Celebdil (also known as Silvertine), and the tower which was built upon its highest eyrie with which today’s post will be concerned.

The dwarves who built Khazad-dûm long ago delved deeply.  Indeed, too deeply as they realized to their great dismay when they awoke a terror from the dark worm-tunnels gnawed into the bedrock of Middle-earth.  However, before the awakening of the Balrog known only as Durin’s Bane to the stone-folk, many an engineering marvel was wrought in the under-kingdom of Khazad-dûm.  Chief among these wonders was the astonishing spiral staircase that rose up through the mountain over 15,000 feet from the deepest dungeon to the very peak of Celebdil.

Any rumors as to the fact that dwarven prowess only existed over short distances would quickly be proven to have been wildly exaggerated if one were to have seen a dwarf climb those stairs (the equivalent of walking up the staircases of 12 of our modern world’s Empire State buildings in a row!)  And climb the stairs they did, as at the very top of the staircase, upon the highest rocky outcropping of Celebdil, was a stone tower with a single solitary window.  Through this window a watch was kept over all the lands east of Khazad-dûm.  It is unfortunate that the ultimate ruin of Khazad-dûm did not come from the outside, but rather from the very bottom of the endless stair that rose to Durin’s Tower itself.  And so the watch was kept until Durin’s Bane brought ruin to Khazad-dûm.  And so Durin’s Tower laid empty until Durin’s Bane destroyed it too in its mortal battle with the Wizard Gandalf at the top of the world at the end of the Third Age.

Always appreciated…though if you keep doing this I’ll never learn to do stuff like, I don’t know, actually proofread my posts that I write at 2 AM Monday night…