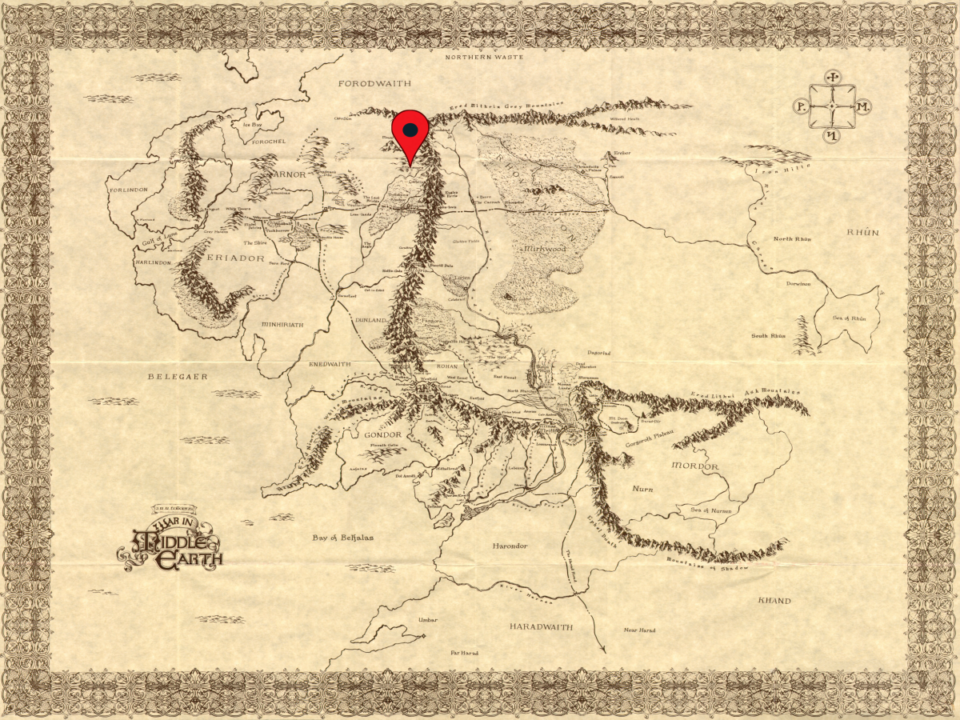 This month I’ll be discussing a rough range of valleys and highlands extending off of the Misty Mountains.

‘I reached here at last by a long hard road, up the Hoarwell and through the Ettenmoors, and down from the north. It took me nearly fourteen days from Weathertop, for I could not ride among the rocks of the troll-fells, and Shadowfax departed. I sent him back to his master; but a great friendship has grown between us, and if I have need he will come at my call. But so it was that I came to Rivendell only three days before the Ring, and news of its peril had already been brought here-which proved well indeed.

The western slopes of the Misty Mountains that lay to the North of Rivendell were full of orc malice and evil.  Fell names such as Mount Gundabad, Carn Dûm, and Mount Gram were spoken in hushed tones by northlanders who knew all too well the sorrows wrought by those foul dens of wickedness.  Mount Gram was a special case, existing as it did, not in the Misty Mountains proper, but instead upon a long arm of high fells known as the Ettenmoors.

The Ettenmoors thrust out from the Misty Mountains proper for some hundred miles before ending in the solitary Mount Gram at their western tip. Alternately called the Ettendales, Cold-fells or Troll-fells, they were a cold and inhospitable land of giant valleys and high windswept moors broken up by massive ancient rocks.

The ground was treacherous by foot and impassible by horse, it is no small wonder that it was to the Ettendales that the Witch-king of Angmar fled in the aftermath of the Battle of Fornost in 1975 T.A., for no pursuing army would have been able to track him for long in that twisted land.  The valleys were crossed by many small streams trickling out of the high places of the Ettenmoors, including the source spring for the river Hoarwell (Mitheithel) that flowed down past the Last Bridge, and joined the Loudwater far to the south where it became the Greyflood.

Though the name “Ettenmoors” suggests giants (from the Westron “eoten”), any giants that might have once lived in the Ettenmoors long since disappeared from the lands.  However, aside from the orcs that infested their western areas (about the base of Mount Gram), the Ettenmoors were known troll lands.  The trolls that accosted Bilbo and the dwarves had wandered out of the Ettenmoors.  The Ettenmoors were also the land were Arador, grandfather of Aragorn, who met his untimely death at the hands of a malicious band of hill trolls when he attempted to journey into the bleak and foreboding land.  Thus it was with good reason that his grandson Aragorn advised against entering the dangerous land as he attempted to get the hobbits to Rivendell!