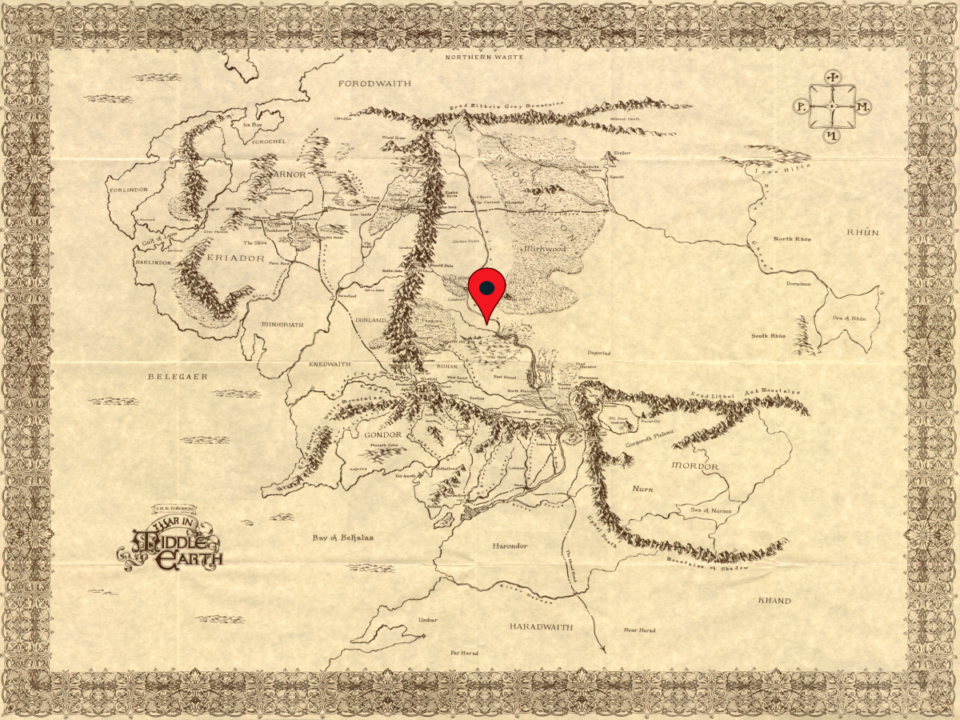 This month I’ll be discuss the site of the battle that led to the foundation of the kingdom of Rohan.

As their eyes changed, the travellers perceived that the floor was paved with stones of many hues; branching runes and strange devices intertwined beneath their feet. They saw now that the pillars were richly carved, gleaming dully with gold and half-seen colours. Many woven cloths were hung upon the walls, and over their wide spaces marched figures of ancient legend, some dim with years, some darkling in the shade. But upon one form the sunlight fell: a young man upon a white horse. He was blowing a great horn, and his yellow hair was flying in the wind. The horse’s head was lifted, and its nostrils were wide and red as it neighed, smelling battle afar. Foaming water, green and white, rushed and curled about its knees.

‘Behold Eorl the Young!’ said Aragorn. ‘Thus he rode out of the North to the Battle of the Field of Celebrant.’

The great river Anduin had seen many battles as flowed through Middle Earth, unchanged through the passing ages. Some battles, like the great conflict that had so blasted The Brown Lands, were great conflagrations of fell sorceries and staggering loss of life.  Others, like The Battle of the Field of Celebrant were smaller affairs, though of no lesser importance when one considers their effect on the delicate geopolitical landscape of Middle Earth in the Third Age.

Our tale begins in T.A. 1636 when the evil winds that bore the great plague swept across the Gondorian province of Calenardhon, killing half of its population by the time it had run its course.  As Gondor strengthened its shrunken borders during the Watchful Peace that followed the dreadful plague years, Calenardhon struggled to bounce back, and was both sparsely populated and sparsely defended.

Thus, when the Balchoth (evil men from the east) swept into Calenardhon in T.A. 2510, they quickly overthrew what little resistance they met in the largely depopulated land.  Gondor sent their own host north from Minas Tirith, but the Balchoth cut them off and pushed them north over the Limlight.  There, the wounded Gondorian army met a great host of opportunistic orcs (still in great numbers as this was before their war with the dwarves) from the Misty Mountains on the wide green field of Celebrant between the Limlight and the Anduin (to the south east of the actual river Silverlode which the elves called Celebrant).

All seemed lost until Eorl the Younger and a host of mounted Éothéod, answering the red arrow sent by Cirion, Steward of Gondor, surged out of the shallow waters of the North Undeep after a long journey south from Framsburg. They tore into the orcish army’s flank with such ferocity that the orcs fled to the south.  But they were unable to outrun the cruel Éothéod spears, and as they ran, the Balchoth too were swept up into their panicked route through Calenardhon.  The Éothéod showed little mercy, and many orcs and Balchoth knew what it was to be spitted on a Rohirrim spear that day I can tell you.

It was this great victory on the Field of Celebrant between two rivers that led to Cirion the Steward granting Eorl the lands of Calenardhon in which to settle the Éothéod (which of course uprooted Calenardhon’s current occupants, the men who later came to inhabit Dunland).  And thus the land came to be known as Rohan, and the Éothéod the Rohirrim (horse lords), and the friendship between them and Gondor lasted until the War of the Ring and beyond.

Had Eorl not ridden to the aid of the beleaguered Gondor at The Battle of the Field of Celebrant not only would the Wold and most of Calenardhon have been overrun by orcs and the Balchoth, but also the Rohirrim would never have become the protectors of the land.  Gondor would not have had the population to defend the gap of Rohan, Eomer would not have inadvertently saved Merry and Pippin, the Ents would never have awoke in rage, Saruman’s Uruk Hai would never have been defeated at Helm’s Deep, and Minas Tirith would have fallen after being beset on all sides by enemies with none to come to their aid.  Eorl did not know it, but the fate of Middle Earth hung on the outcome of his fateful ride to the Field of Celebrant.

That Ghostbusters reference more than makes up for misspelling “inadvertently” and putting an apostrophe in “it’s”. Great post.

I blame inadvertant [sic] on poor spelling skills, and “it’s” on writing this at 2 AM 😉 And yet I somehow managed to nail Calenardhon every time…