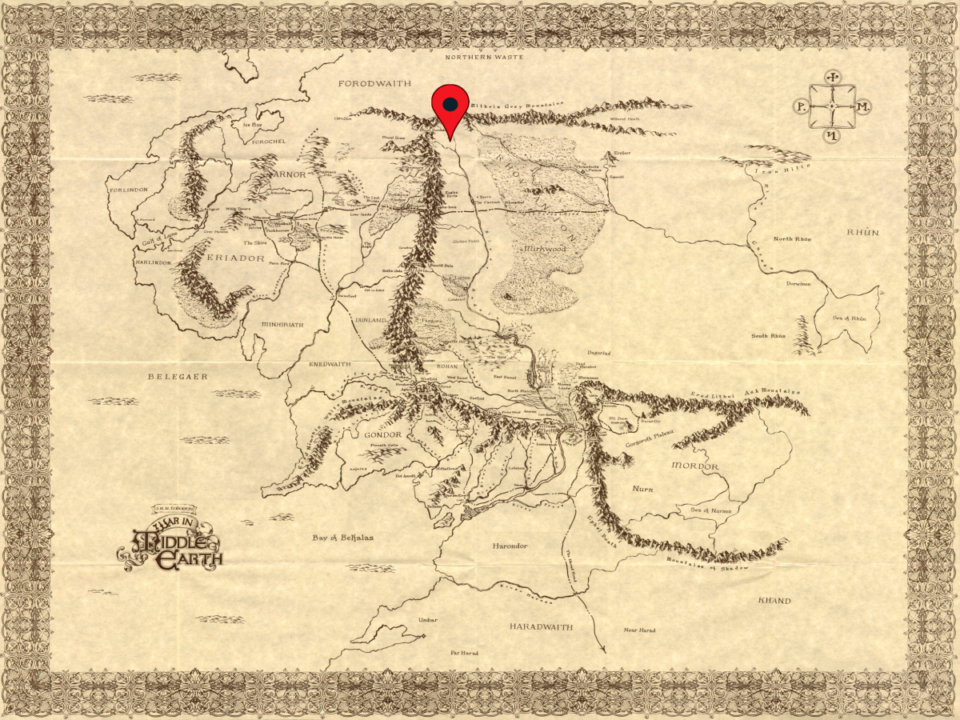 This month I’ll be discussing the fortified burg of the Éothéod, Framsburg.

Many lords and warriors, and many fair and valiant women, are named in the songs of Rohan that still remember the North. Frumgar, they say, was the name of the chieftain who led his people to Éothéod. Of his son, Fram, they tell that he slew Scatha, the great dragon of Ered Mithrin, and the land had peace from the long-worms afterwards. Thus Fram won great wealth, but was at feud with the Dwarves, who claimed the hoard of Scatha. Fram would not yield them a penny, and sent to them instead the teeth of Scatha made into a necklace, saying: “Jewels such as these you will not match in your treasuries, for they are hard to come by.” Some say that the Dwarves slew Fram for this insult. There was no great love between Éothéod and the Dwarves.

In the aftermath of the Wainrider invasions of the third age, the remnants of the Northmen who dwelt in the Wilderland of Middle Earth formed a new people, the Éothéod.

Their capitol city was founded by Frumgar, the first chieften of the Éothéod, around T.A. 1977.  However, it was not until around T.A. 2000 when the city received the name it would come to be known by, Framsburg.  This was the time during which Fram, son of Frumgar, slew the great dragon Scatha, and claimed the dragon-hoard in the name of the Éothéod.

This caused much strife between the newly formed Éothéod and the dwarves of the region.  The dwarves claimed Scatha’s great hoard for themselves, and took Fram’s offer of the dragon’s teeth, along with the note “Jewels such as these you will not match in your treasures, for they are hard to come by.”  The Éothéod and the dwarves eventually made peace, though not before Fram the dragonslayer was slain.

To remember his great deed, the Éothéod renamed their chief city Framsburg.  It was located between the confluence of the Greylin and Langwell and the inflow of the Limlight into the Anduin.  It was surrounded by a ditch and stone wall and was the only fortified city of the Éothéod.

Framsburg remained an important hub for the Éothéod until their final lord, Eorl the Young, was giving the lands of Rohan (originally the Gondorian province of Calenardhon) by the Steward Cirion in T.A. 2510 for their rescue of the beleaguered Gondorian forces in the Battle of the Field Celebrant.

With the departure of the Éothéod, Framsburb eventually fell into ruin like many cities in the waning years of the Third Age.  However, the treasures of the dragon Scatha survived well into the Third Age.  Even the horn given to Merry Brandybuck by Eowyn in the aftermath of the War of the Ring was a remnant of the treasure hoard of Scatha.  To this day, ancient treasures may still linger in the forgotten, moss-covered crevices of the crumbling ruins of the once mighty Framsburg.

This is still by far *my* favorite Monday feature. Now and forever.

I was recently asked if I ever thought I would run out of places to feature on Middle Earth Monday. I couldn’t tell if they were worried for its longevity, or hoping an end was in sight.

An end was found Isley… for good and bad.