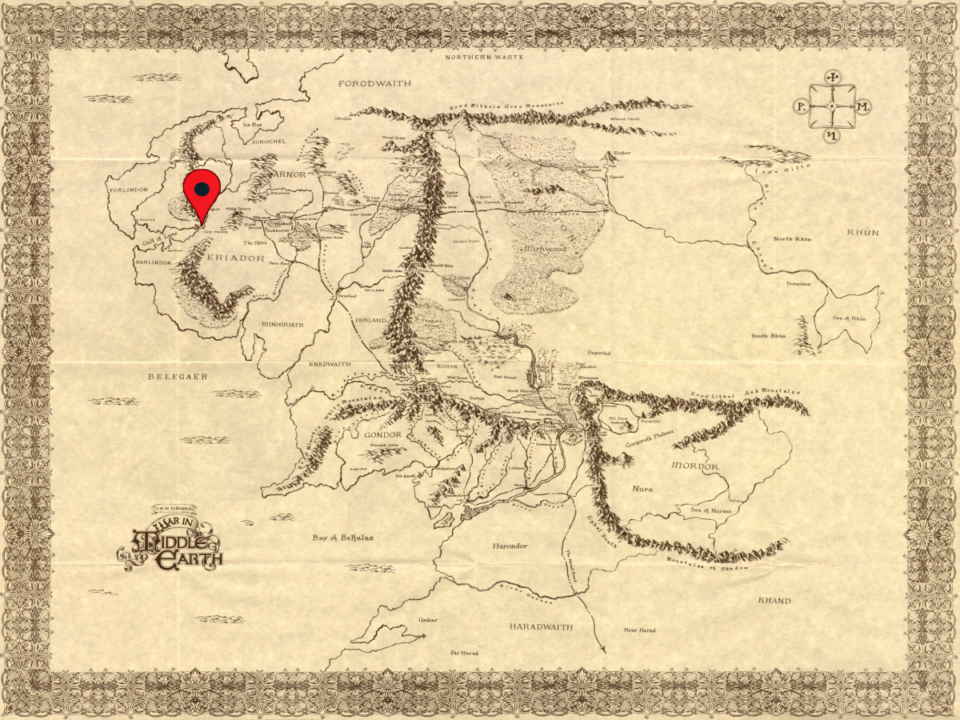 This month I’ll take a look at the northern most elf harbor in Middle-earth, and the site of the last remaining path to the sky-realm of Valinor.

Though they rode through the midst of the Shire all the evening and all the night, none saw them pass, save the wild creatures; or here and there some wanderer in the dark who saw a swift shimmer under the trees, or a light and shadow flowing through the grass as the Moon went westward. And when they had passed from the Shire, going about the south skirts of the White Downs, they came to the Far Downs, and to the Towers, and looked on the distant Sea; and so they rode down at last to Mithlond, to the Grey Havens in the long firth of Lune.

Founded in the first year of the second age, Mithlond (translated: Grey Harbor) was the first elf-haven upon Middle-earth.  And, as Edhellond fell into ruin in the last millennium of the Third Age, Mithlond was also the last elf-haven upon Middle-earth.  Upon each side of the entrance of the long Gulf of Lune (at the very end of the great East/West road) were built mighty harbors wherein a mighty host of ships might berth (though, so great was the strength of Gondor’s navy during the Angmar War that the ships of Eärnur filled both harbors of the Grey Havens as well as the nearby harbors of Forlond and Harlond.

The Grey Havens were perhaps named for the blue-grey mist that hung ever in the air, full of the smell of sea twinged with the melancholy sorry of parting.  For the Grey Havens were also the last remaining site where the elves of Middle-earth might board a ship and travel the straight road past the encircling seas to Eressëa and Valinor beyond the mortal world.

It was Círdan the Shipwright, Lord of the Havens, and wisest and most far-seeing of the elves who held the secrets of the straight road.  It was he who gave Narya, the ring of fire to Gandalf the Grey (though it ended up sowing the seeds of discord with Saruman, chief of the Istari), and it was he who taught the ways of ship building to the elvish founders of Edhellond to the south.

Grey-haired Círdan the wise was there in the second age when Sauron had conquered all of Eriador (save Mithlond and the beseiged Imladris).  It was who fought side by side with Gil-galad, the Elvenking, holding the Grey Havens until Tar-Minastir Númenórean navy arrived in 1700 S.A. to free the North.  Even after this battle, many of Gil-galad’s folk (the high elves) lingered on at Mithlond.

Círdan, master builder was there on September 21st, 3020 T.A. when the last of the ringbearers departed Middle-earth for the undying lands.  And yet, even then he did not leave.  For his was a trust to stay upon those grey shores unil the last ship leaves Middle-earth for Aman.  Who’s to say he does not linger there still, ever in readiness for that last day when he too might leave his long watch on Arda behind.

I STILL READ THIS AND IT IS STILL MY FAVORITE FEATURE!!!