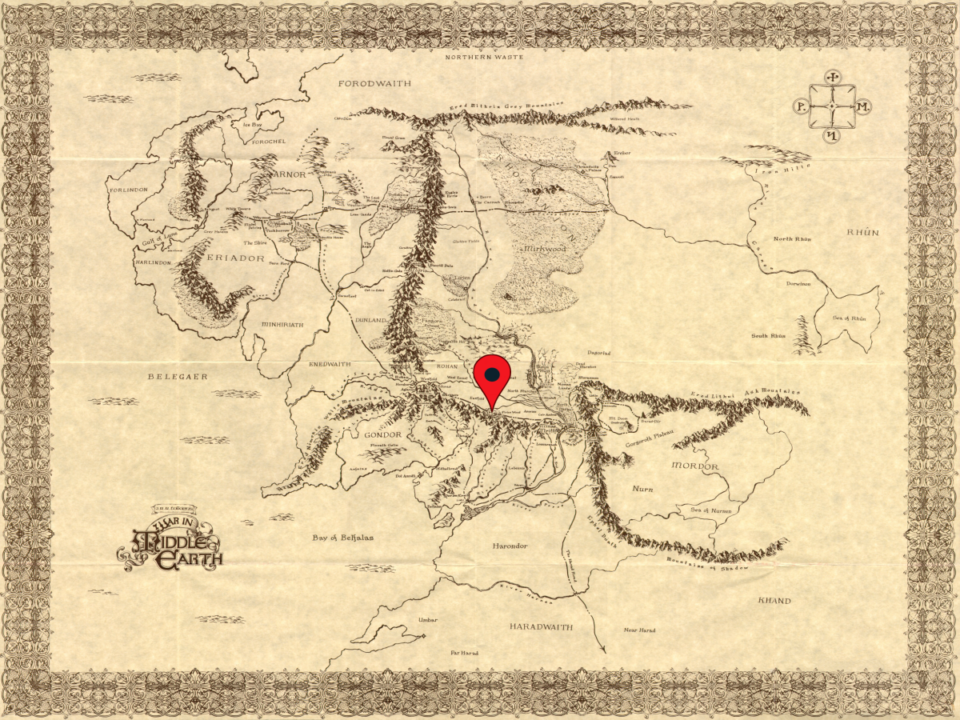 This month I’ll be discussing the first of the great Gondorian beacon hills and the forest surrounding it.

On into the shadow they rode. In the willow-thickets where Snowbourn flowed into Entwash, twelve leagues east of Edoras, they camped that night. And then on again through the Folde; and through the Fenmarch, where to their right great oakwoods climbed on the skirts of the hills under the shades of dark Halifirien by the borders of Gondor; but away to their left the mists lay on the marshes fed by the mouths of Entwash. And as they rode rumour came of war in the North. Lone men, riding wild, brought word of foes assailing their east-borders, of orc-hosts marching in the Wold of Rohan.
‘Ride on! Ride on!’ cried Éomer. ‘Too late now to turn aside. The fens of Entwash must guard our flank. Haste now we need. Ride on!’

The Mering stream (River Glanhír) flowed down from high in the White Mountains as it made its way to join up with the Entwash before making the long journey to the Bay of Belfalas.  It would have been forgotten in the annals of fictional history were it not for the fact that marked the boundary between the realms of Gondor and Rohan.  To the west was the Rohiric province of the Eastfold, and to the East was the Gondorian province of Anorien (The Sunland).  On both sides of its clear, icy headwaters lay the Firien woods, a forest of not insignificant size (only slightly smaller than the Old Forest).  The Firien Forest was predominantly oak, and the trees climbed up the sides of the outlying hills as far as the upper slopes of the low peak Halifirien (Rohirrim for “holy mountain”).

Halifirien is noteable for two very important reasons.  First, it was the first of the line of seven beacon hills used by Gondor to call their ally to their side.  A guardpost high atop its wooded slopes remained ever vigilant for any sign of fire on Mount Calenhad to the east.  Second, for much of the third age, Halifirien was the location of the secret tomb of Elendil, the first king of Arnor.

Halifirien was initially called Eilenaer by the Gondorians.  However, after it was chosen (due to its location as the center of Gondor at that time) by Elendil’s son Isildur to be the site of his father’s tomb it was known by some as Amon Anwar (hill of awe).  Only the kings and stewards of Gondor knew of its location, and the secret was passed from father to son.  Then, in the aftermath of the Battle of the Field of Celebrant, Cirion, the 12th steward of Gondor, established the realm of Rohan with Eorl the Young as its first king.  As Halfirien was no longer the center of Gondor, Cirion revealed the secret tomb to Eorl and moved Elendil’s casket to the Hallows of Minas Tirith.

Thus the peak of Halifirien remained for the rest of the third age a place of quiet awe where little of note happened (beyond the death by goring of Folca, 13th king of the Mark (4th of the second line), by the monstrous boar of Everholt in 2864) .  Little of note that is, until the year 3019, when the watchers upon its slopes saw the signal fire of far off Calenhad suddenly flare to life, signalling the beginning of the last ride of Theoden, savior of the Battle of the Pellenor Fields.

I’m sorry it’s taken so long for me to comment on this. I will just say that I would like to write a book entitled “The Secret Tomb of Elendil.” It would probably be for children. Perhaps a group of misfit kids discover this tomb? And fix it up? And it becomes their secret tomb playground? And at first, the ghost of Elendil is all “dammit, you kids, get off my tomb lawn!” but eventually they learn to respect one another and a grudging friendship is forged.

Oh god, I’m half tempted to actually steal your idea and write this. Perhaps a group of runaway pukelmen children from the Druaden Forest to the East?