Middle-earth Monday 46: The Hills of Evendim 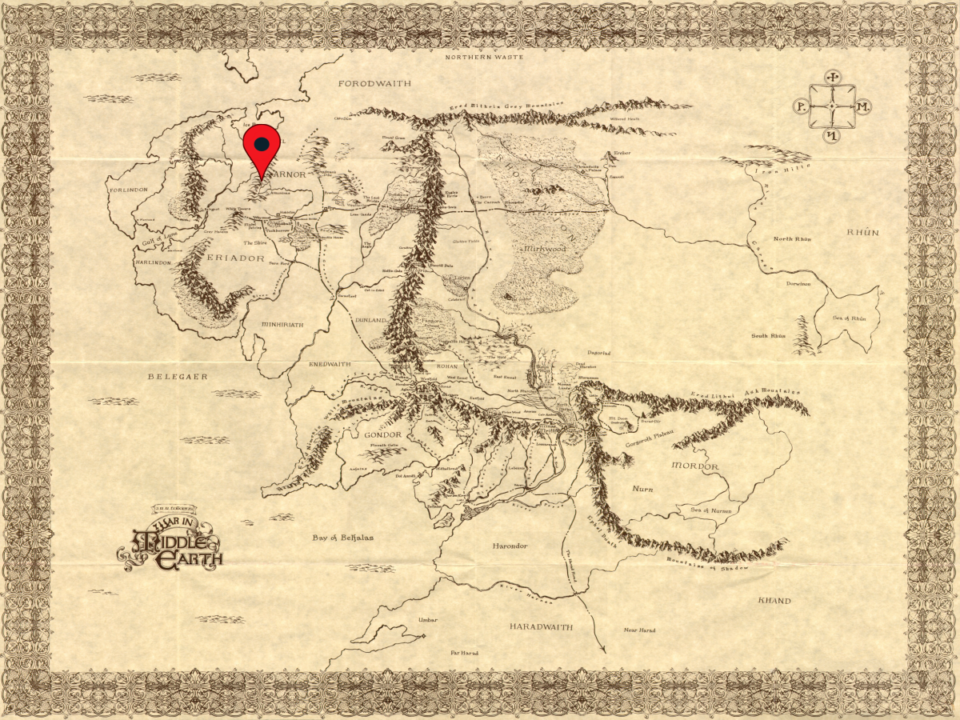 This month I’ll take a look at the lands about the northern lake Nenuial, once king-seat of the North-realm of Arnor.

There were fourteen Chieftains, before the fifteenth and last was born, Aragorn II, who became again King of born Gondor and Arnor. ‘Our King, we call him; and when he comes north to his house in Annúminas restored and stays for a while by Lake Evendim, then everyone in the Shire is glad. But he does not enter this land and binds himself by the law that he has made, that none of the Big People shall pass its borders. But he rides often with many fair people to the Great Bridge, and there he welcomes his friends, and any others who wish to see him; and some ride away with him and stay in his house as long as they have a mind. Thain Peregrin has been there many times; and so has Master Samwise the Mayor. His daughter Elanor the Fair is one of the maids of Queen Evenstar.’

One hundred miles north of Hobbiton, on the very border of the shire, marked the beginning of some two hundred miles of low lying, but surprisingly steep hill lands known as The Hills of Evendim.  Some also called them  The Twilight Hills (Emyn Uial in Sindarin) for their steep slopes cast a perpetual shadow of twilight upon the hollows in many parts of the hills.  They were most likely folded up during the formation of the Blue Mountains long ago rather than being a more gentle product of millenia of erosion.

However, this is not to say that the hills were impassibly rugged.  For those who knew the way, countless paths ran through the tree-dotted valleys between the hills.  Indeed, without these “passes,” a section of Círdan and Eärnur’s forces from Lindon would not have been able to attack by surprise from their secret march through the hills in 1975, T.A. in order to flank the forces of the Witch King of Angmar in The Battle of Fornost.

Nestled within the southeastern section of the hills was the large Lake Nenuial, some 50 miles long at its widest.  In addition to being the source of the River Brandywine, its shores also marked the location of the city of Annúminas, the capital city of the old north realm of Arnor.  Annúminas was founded by Elendil himself in SA 3320.  It lay right at the mouth of the Brandywine (the river was an important source of commerce and travel for the city) and was considered one of the great cities of Middle-earth.

This city thrived for almost a thousand years until Eärendur, tenth king of Arnor, died in 861 T.A.  Then, due to the kin-fighting of Eärendur’s sons, the Northern realm was split into Arthedain (to the West), Cardolan (to the South) and Rhudaur (to the east).  Eärendur’s eldest son (and thus the true heir), Amlaith, ruled the Western realm of Arthedain and moved his king seat out of Annúminas and into Fornost. After this event Annúminas continued to dwindle until, by the time of the War of the Ring, it had fallen into a deserted ruin.

In the aftermath of the War of the Ring, King Aragorn II decided to restore the capitol of the north kingdom of Arnor at Fornost instead of Annúminas.  However, such was the beauty of The Twilight Hills and Lake Nenuial that Aragorn also began work on rebuilding the ruined city of Annúminas, and he would often stay in his rebuilt residence in that city when he visited the North.