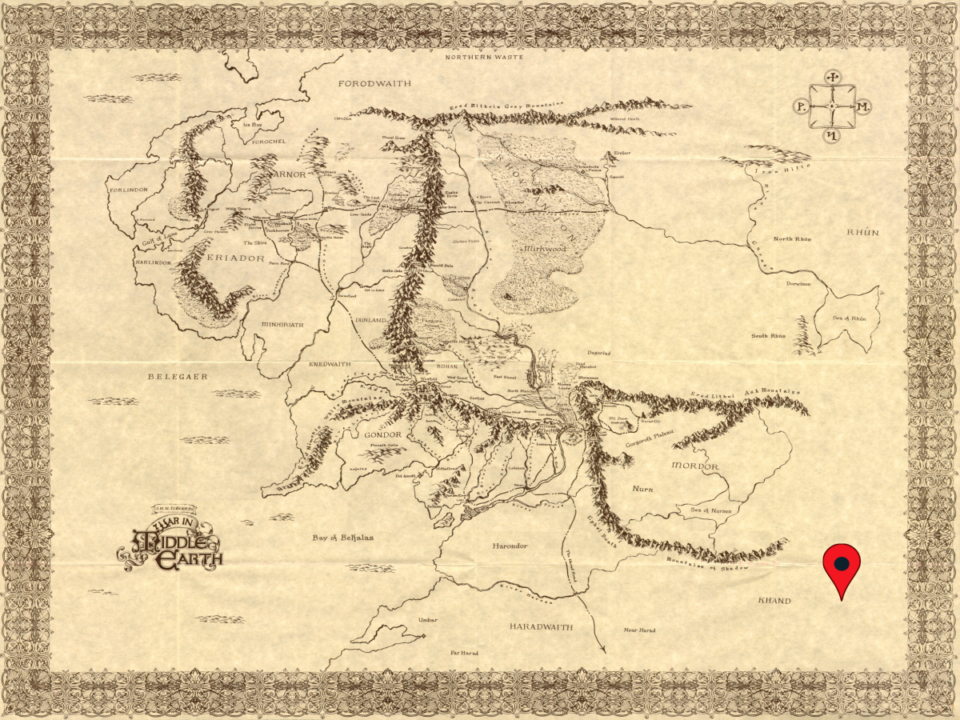 This month I discuss the eastern lands between Rhun and Harad.

And if the Rohirrim at their onset were thrice outnumbered by the Haradrim alone, soon their case became worse; for new strength came now streaming to the field out of Osgiliath. There they had been mustered for the sack of the City and the rape of Gondor, waiting on the call of their Captain. He now was destroyed; but Gothmog the lieutenant of Morgul had flung them into the fray; Easterlings with axes, and Variags of Khand. Southrons in scarlet, and out of Far Harad black men like halftrolls with white eyes and red tongues. Some now hastened up behind the Rohirrim, others held westward to hold off the forces of Gondor and prevent their joining with Rohan.

The vast windswept lands to the east of Middle-earth were the birthplace of all the peoples of Arda.  And though the the lands changed drastically through the ages while the great inland sea of Helcar dwindled away to the small Sea of Rhun in the aftermath of the War of Wrath, men always lived in the trackless plains between the Orocarni and Middle-earth proper.

Just to the immediate southeast of Mordor was the land of Khand.  Like Rhun to the north, Khand was a flat land of grasses shoulder high in places.  The grasslands covered gently rolling hills in the area closest to Mordor, though the hills gradually gave way to flatlands that stretched on into the east like a great tan sea that would glow red with the rising sun.

The inhabitants of Khand were a nomadic people, and the horse was of utmost importance to their culture in their endless wanderings through the plains of the East.  They often feuded with their neighbors, especially the Wainriders of Rhun.  However, in 1944 of the third age, the warriors of Khand (called Variags by the Khandians) allied with their longtime enemies the Wainriders to attack Gondor (whose growing might they perceived as a threat to their nomadic Independence) in an ill-fated invasion that was crushed by Eärnil II.

After the defeat of the Wainriders, the men of Khand kept to themselves, until, as the third age drew to a close, they were drawn into an alliance with their trading ally Mordor to once again battle Gondor.  And, for a second time, the Variags of Khand met defeat at the Battle of the Pelennor Fields.

In the aftermath of the War of the Ring, the men of Khand were said to have retreated deep into the interior of the continent. For, though the arm of Gondor in the fourth age was long indeed, it was not long enough to bring the nomadic and fiercely independent Khandians into the empire.