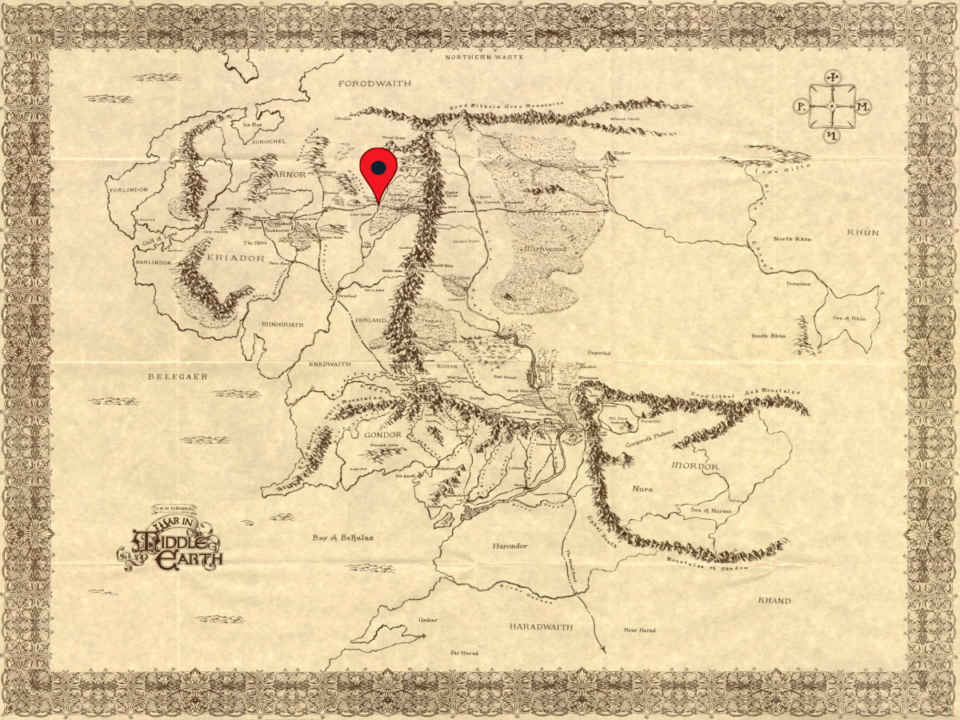 This month I discuss the last bridge one would cross as they journeyed forth into the eastern wilds of Eriador.

I am afraid we must go back to the Road here for a while,’ said Strider. ‘We have now come to the River Hoarwell, that the Elves call Mitheithel. It flows down out of the Ettenmoors, the troll-fells north of Rivendell, and joins the Loudwater away in the South. Some call it the Greyflood after that. It is a great water before it finds the Sea. There is no way over it below its sources in the Ettenmoors, except by the Last Bridge on which the Road crosses.’

‘What is that other river we can see far away there?’ asked Merry.

‘That is Loudwater, the Bruinen of Rivendell,’ answered Strider. ‘The Road runs along the edge of the hills for many miles from the Bridge to the Ford of Bruinen. But I have not yet thought how we shall cross that water. One river at a time! We shall be fortunate indeed if we do not find the Last Bridge held against us.’

The great East-west road was an ancient, long-traveled road.  There were many wonders along its well worn course, the greatest of which must have been the massive three arched bridge that provided the only crossing of the Hoarwell for a great many leagues on either side of the East-west road.  Some said the stones of the bridge, also known as The Last Bridge, had been laid in the elder days of the First Age of the Sun.  Of course, such stories are assuredly apocryphal as Rivendell was not even envisioned in the mind of Elrond until the Second Age.  Still, its deep reaching foundations must have been laid in the raging waters of the Hoarwell at some point soon after the founding of Imladris, for that was the terminus of the East-west road from the middle of the Second Age onward.

Over the centuries, the bridge was broken and rebuilt many times.  Strengthened by the Numenoreans, and then again by the people of Elrond, its importance as the only crossing of the Hoarwell north of Tharbad (itself a dangerous and unstable crossing) was never forgotten to the elves who continued to travel it as they wound their way through Eriador.

It was upon this bridge that Glorfindel first unveiled himself in his wroth and power to the black riders, scattering them to the west and leaving his elfstone behind to signal the way clear for Strider and the Hobbits.  It was over this bridge that the Morgul-wounded Frodo was born, racing to the Fords of Bruinen and the safety of Rivendell. Without the last bridge, Frodo would have assuredly perished to the shadow as his party traveled far to the north to cross the Hoarwell at its source waters rather than by the ancient bridge that had carried so many travelers before them across the wildest reaches of Eriador.