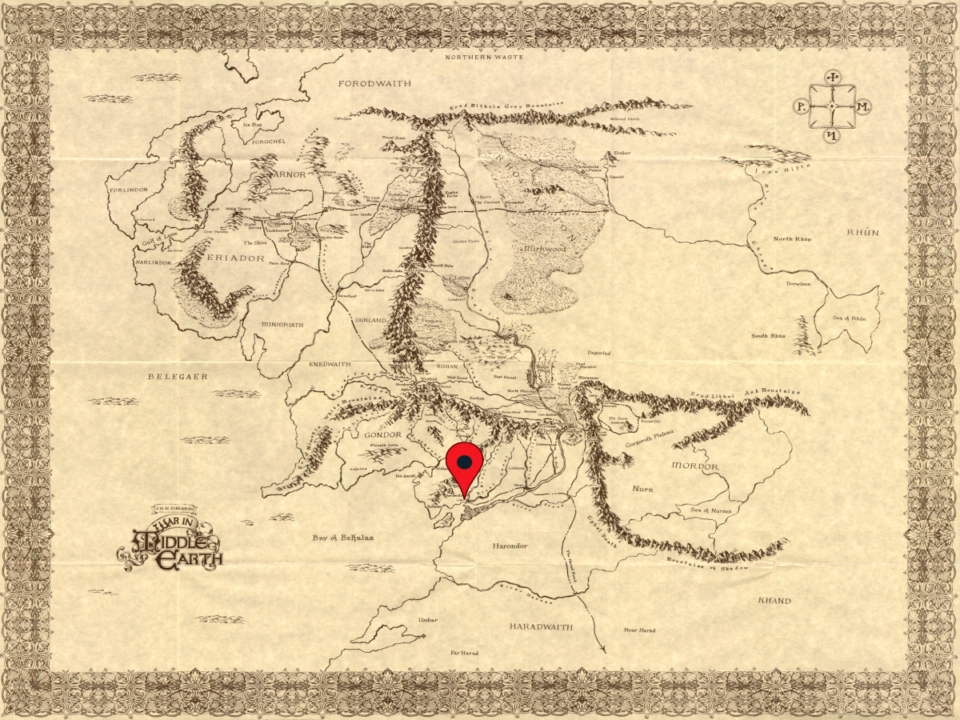 This month I discuss a small coastal township in southern Gondor.

One day of light we rode, and then came the day without dawn, and still we rode on, and Ciril and Ringló we crossed; and on the third day we came to Linhir above the mouth of Gilrain. And there men of Lamedon contested the fords with fell folk of Umbar and Harad who had sailed up the river. But defenders and foes alike gave up the battle and fled when we came, crying out that the King of the Dead was upon them. Only Angbor, Lord of Lamedon, had the heart to abide us; and Aragorn bade him gather his folk and come behind, if they dared, when the Grey Host had passed.

A man could stand upon a hilltop just about anywhere in Lebennin or Dor-en-Ernil and gaze to the limits of his human vision without seeing a sign of habitation, depending on the direction he looked.  However, while Gondor was a great land, full of green hills and greener forests, its vast frontiers contained many a settlement within their borders.  Today’s township, Linhir, is one of the smaller settlements, but like all places in Middle-earth, it was filled with enough deeds of valor to earn its place within the Red Book of Westmarch.

Located on the confluence of the rivers Gilrain and Serni, the township of Linhir had grown up as a haven around the silty shallows that spread out at the intersection of the two rivers.  Though the Serni was the shorter of the two rivers, it was deeper and possessed of greater urgency as it swept its way down to the sea, and thus it lent its name to the short stretch of water beyond the joining of the two rivers.

Though there were docks on both sides of the river, they were smaller affairs.  Most of the more serious commerce found its way to Pelargir on the Anduin thirty leagues to the south.  Linhir was mostly important as a ford into Lebennin proper, and as such it was targeted by Harad in their attack upon the coastal fiefdoms of Gondor.  However, so determined were its defenders, led by Lord Angbor along with a host of his people from the north in Lamedon, that Linhir held on to their township until Aragorn arrived with his fearsome army of the dead.  And, while none could have withstood their amassed spectral might, who is to say what might have happened had they met with stiffer resistance and Aragorn had been forced to summon forth his army by their Black-stone oath in Linhir instead of saving their might for the great host out of Umbar that had gathered at Pelargir.