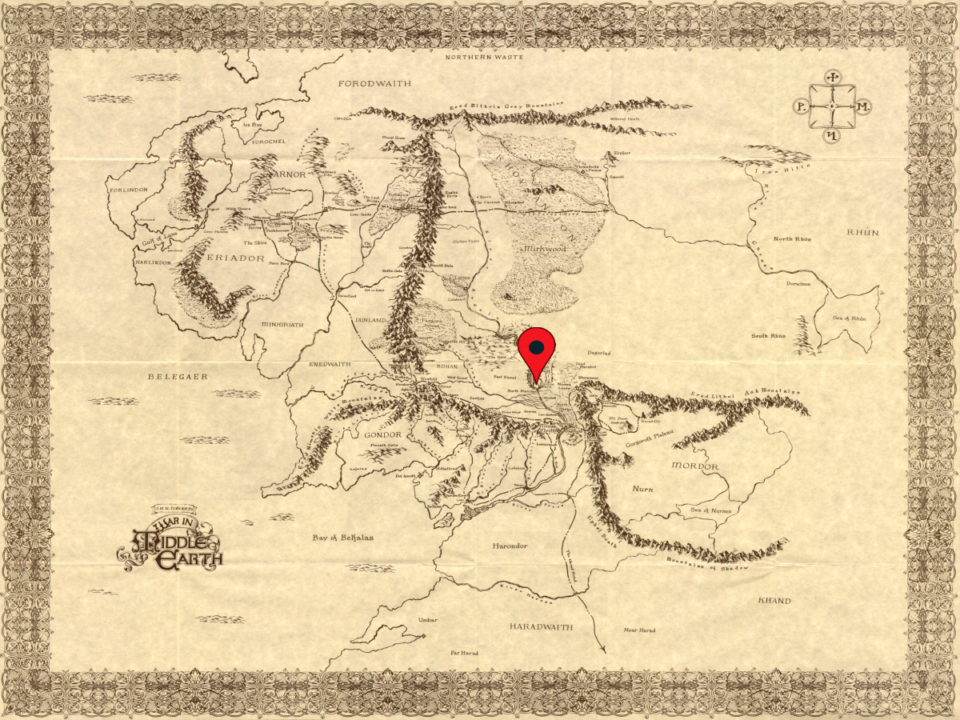 The time you have all been waiting for is here!  That’s right, the final www.isleyunruh.com Monday feature will be Middle-earth Monday: where I use my love of fictional cartography to take an in depth look at a different place in Middle-earth each month!  Oh don’t all leave at once, it can’t be any worse than my film “essays” right?  Besides, Middle-earth is a place of enchantment and wonder, so why not take a moment to fill you head full of knowledge that will have no bearing  at all on the real world?

For today’s inaugural post, I’d like to take a look at my all time favorite lake in Middle-earth!  No, not Lórien’s famous shaded lake Lórellin, nor the misnamed “Sea” of Núrnen, and, no, not even Lake Titicaca (that would be my all time favorite REAL lake); instead I’ll be talking about the lake of Nen Hithoel for this month’s Middle-earth Monday.

Nen Hithoel, a lake upon the mighty river Anduin situated amongst the hills of the Emyn Muil, is the source of the great Falls of Rauros which pour from its southern end between the three hills of Amon Lhaw, Amon Hen and Tol Brandir.  However, the most striking feature of the lake is found at the North end were the enormous Gates of Argonath, carved in the likeness of Isildur and Anárion (founders of the realm of Gondor–Isildur was the guy who cut the ring off Sauron’s finger).  These statues would have been the first sight greeting any traveler entering the lake from the Anduin:

As Frodo was borne towards them the great pillars rose like towers to meet him.  Giants they seemed to him, vast grey figures silent but threatening.  Then he saw that they were indeed shaped and fashioned: the craft and power of old had wrought upon them, and still they preserved through the suns and rains of forgotten years the mighty likenesses in which they had been hewn.  Upon great pedestals founded in the deep waters stood two great kings of stone: still with blurred eyes and crannied brows they frowned upon the North.  The left hand of each was raised palm outwards in a gesture of warning; in each right hand there was an axe; upon each head there was a crumbling helm and crown.  Great power and majesty they still wore, the silent wardens of a long-vanished kingdom.  Awe and fear fell upon Frodo, and he cowered down, shutting his eyes and not daring to look up as the boat drew near.  Even Boromir bowed his head as the boats whirled by, frail and fleeting as little leaves, under the enduring shadow of the sentinels of Númenor.  So they passed into the dark chasm of the Gates.

This passage from The Fellowship of the Ring took place on February 25, 3019 of the Third Age, which puts the age of the statues at about 2000 years.  According to the index of The Return of the King.  The great statues (literally “kings (ar)” of “stone (gond)”) were created by Regent Rómendacil II around 1248 TA.* Rómendacil II destroyed a large army of Easterlings that had gathered East of Rhovanion, and then, because of increasing threat of Easterling invasion (due to the various treacherous factions of men in the Anduin vales who were willing to forge alliances with the Easterlings) Rómendacil II fortified the West side of the Anduin as far as the the Limlight, and created the Pillars of Argonath which marked the Northern border of the realm of Gondor (of course, the realm’s power did not extend as far by the time of Lord of the Rings).

After passing through the Pillars of Argonath, the Anduin river opened out into the lake proper, some 20 miles long by about 15 miles wide and surrounded by the craggy hills of the Emyn Muil.  To the west the hills of the Emyn Muil ended after about twenty miles in the cliff that made up the so-called “Wall of Rohan”, while to the East they went on a good deal farther before giving way to the Dead Marshes.

Three peaks distinguished themselves in the Emyn Muil.  Amon Lhaw, Amon Hen and Tol Brandir.  Of these, Tol Brandir (meaning “tower steep”) was a huge jutting rock that formed Nen Hithoel’s only island.  Located right at the top of the falls of Rauros and with steep rock sides, it is no wonder that legend said no man had ever stepped foot upon it.  The hills of Amon Lhaw (meaning “hill of the ear”) and Amon Hen (meaning “hill of the eye”) were located on the southernmost banks of Nen Hithoel to the East and the West respectively.  These “hills” grew steeper at their summit and each had a watch tower built (according to Aragorn they were built “in the days of the great kings” which probably puts their construction long before the Pillars of Argonath) at the top.  It was from the hill of Amon Hen that Frodo sat and saw into Mordor itself while wearing the ring.  It was also at the foot of Amon Hen where the Fellowship was broken upon the lawn of Parth Galen.  The lake flowed past these three hills into the huge Falls of Rauros after which the river Anduin resumed its course through the wetlands of the Nindalf far below.

This ends our journey through the mist cloaked lands about Nen Hithoel.  Though Middle Earth has countless places full of mystery and lure, I thought the best way to begin this new Monthly Monday series would be to discuss the ancient gateway into Gondor, the age old realm of the Númenóreans.

*Sadly, the exact creation of the Pillars of Argonath is one of the areas where the Silmarillion and The Lord of the Rings share some continuity discrepancies.  In the Silmarillion, of Isildur and Anárion, Tolkien says: “…other works marvellous and strong they built in the land in the days of their power, at the Argonath…”  This of course would have been almost 1500 years earlier than the date of construction given in The Return of the King.  Unfortunately there is no way to reconcile this difference and The Return of the King must be given precedence in the canon of Middle Earth.

tolkien’s son should write a fictional story about an archeologist trying to reconcile the historical discrepancies and he instead stumbles across a lost tribe of dwarves hiding in the Scottish highlands.

I love this feature so much.

Well I’m very glad to hear that…because you might be in a minority! …of course, I love writing it, so it won’t go away anytime soon 🙂

Nearly 11 years later after you posted I start my journey through this series of posts.

Enjoying it so far!

Hey, awesome, I go deep on some of these, buckle in 🙂